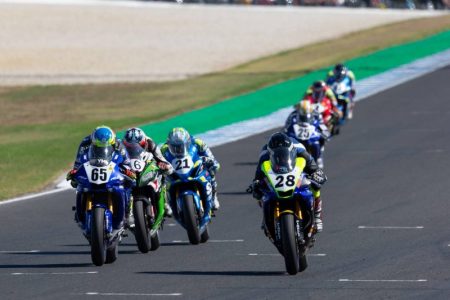 Aiden Wagner has claimed the opening round of the Australian Superbike Championship with victory in the final race of the weekend at Philip Island.

The Yamaha rider rose from fourth at the start to head the race from 2015 champ Mike Jones and Cru Halliday in third, backing up his victory and second place finishes yesterday.

Josh Waters led from the start from Daniel Falzon as a leading group developed in the early laps.

Jones and Arthur Sissis were unexpected participants in the lead battle, the pair making the best of strong starts to join the race favourites.

An impressive performance from Jones saw him play an active part in the lead battle while Sissis was unable to maintain the pace as he faded to 11th by the flag.

The lead battle saw positions change regularly, with Jones taking the lead at the Hayshed on Lap 9.

As the race built to its climax Halliday moved through on Waters to take second, with Wagner making his move as the pack began its final lap.

Having been involved in two final corner squabbles in the opening two races of the weekend, Wagner this time made no mistake and edged to a clear lead during the final lap to hold the advantage at the flag.

He held on ahead of Jones and Halliday in second and third respectively, with Falzon fourth ahead of Waters, the result handing him the lead and the early championship advantage.

Round 2 of the Australian Superbike Championship heads to Wakefield Park in Goulburn on March 22-24.