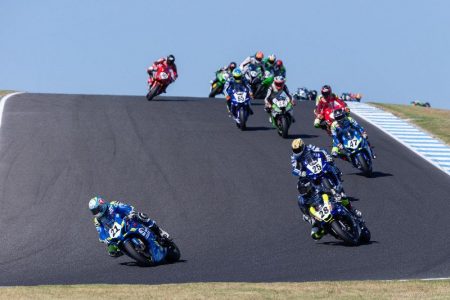 Privateer Aiden Wagner snatched victory in Race 2 of the Australian Superbike Championship at Phillip Island after a final corner fall for Wayne Maxwell.

The clash left Maxwell a retirement as Wagner took the flag at the line to win from Cru Halliday and Josh Waters.

Wagner started the race from pole but it was Waters who headed the field away from Daniel Falzon with Wagner in third.

A three-way battle developed between Wagner, Maxwell and Waters, with Falzon and Halliday buying into the tussle to make for a five-rider leading pack.

Falzon’s charge ended on lap five when he crashed at MG, before Halliday and Wagner appeared to tangle at Honda soon after.

That incident forced Halliday to sit up, dropping him to fourth while Maxwell briefly took control at the front.

The leading group traded positions routinely, Maxwell and Wagner banging panels as they tipped into the first corner at the start of the 11th tour.

Traffic played its part late in the race, delaying Wagner and allowing Maxwell to sneak back through to the head of the race, with Halliday also looking to steal his way through.

Heading into the final corner Wagner seized the narrowest of gaps inside Maxwell, the pair making contact which sent the Suzuki rider to the ground.

Wagner was able to continue to win the from Halliday with Waters in third.

Earlier, Maxwell won the opening race of the day following a race-long battle with Wagner, with Bryan Staring rounding out the podium.

Troy Bayliss jumped well from the second row to lead at the end of the opening lap before contact with Maxwell sent the veteran into the gravel and out of the race.

A frenetic tussle for the lead then developed into a race long stoush, and was only decided when Wagner missed a gear rounding the final corner, allowing Maxwell through for victory.

The weekend concludes with Race 3 at 1030 (AEDT) on Sunday morning.