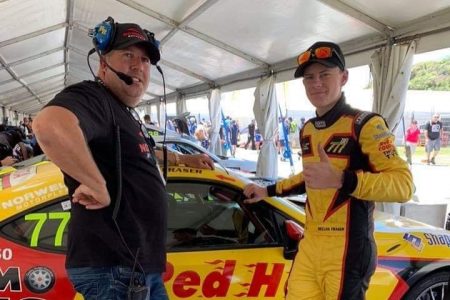 Paul Morris Motorsport has announced the formation of a new academy as well as a two-car team in this year’s Toyota 86 Racing Series.

Morris will field youngster Declan Fraser and Luke Vanna in the one-make series, in addition to 2018 86 race winner Broc Feeney in the Kumho Tyre Super3 Series.

They will be members of the Paul Morris Racing Academy, based out of his Norwell Motorplex facility on the Gold Coast where Feeney is also completing an apprenticeship.

The establishment of the academy comes after an impressive rookie Virgin Australia Supercars Championship season for Anton De Pasquale, who cut his teeth in a touring car with Morris in the Dunlop Super2 Series.

“The Paul Morris Racing Academy is the first of its kind in Australia and you can see the development of the young drivers that have come through our race coaching program at the Norwell Motorplex.

“By formally launching the Academy, it gives us the chance to work with local and national authorities to get the recognition it deserves.

“We’ve selected Declan Fraser and Luke Vanna to our program as they are two young guys on the rise in the Toyota 86 Racing Series, which is a perfect way to learn racecraft before going onto a Supercars, or GT career.

“Declan and Luke are good kids with talent who are prepared to take everything in.

“We want to get drivers to the Academy then teach them how to go racing in the proper way, but it is more than racing.

“These days it is about being the full package off the track as well as on and that is what we’re trying to instil in the drivers that visit the Paul Morris Racing Academy.”

Both Fraser and Vanna will be embarking on third seasons in Toyota 86 but their first with Morris.

“Drawing on Paul’s experience throughout last year with his ‘Dudecamps’ really helped my transition into car racing,” said the former.

“After learning the ropes last season, I’m really looking forward to be challenging for the Toyota 86 Racing Series Title this year.”

Vanna will dovetail his 86 campaign with a drive in another Toyota, namely a Sieders Racing Team Hilux SuperUte in which he made a one-off start in Surfers Paradise last year.

“Any of the guys that have come through Paul’s programs have shown improvement,” he said.

“Last year was a tough initiation into the Toyota 86 Racing Series, but this year, we have a new car – which won two races with Broc last year and the championship in its inaugural year with Will Brown – along with the support of Paul Morris Motorsports and the Paul Morris Racing Academy.

“The Toyota 86 Racing Series always presents big fields and it is great racing that really gives you the skills you need to move up the motorsport ladder.

“With Paul’s tutelage and the benefits that come from being part of his team, I hope that we’ll have a top year and be right in the mix for the title.”

PMM had run Shae Davies in last year’s Super2 Series but is sitting out the second tier for the time being.

The Toyota 86 Racing Series and Super3 start on the Supercars support card at the WD-40 Phillip Island SuperSprint on April 12-14.