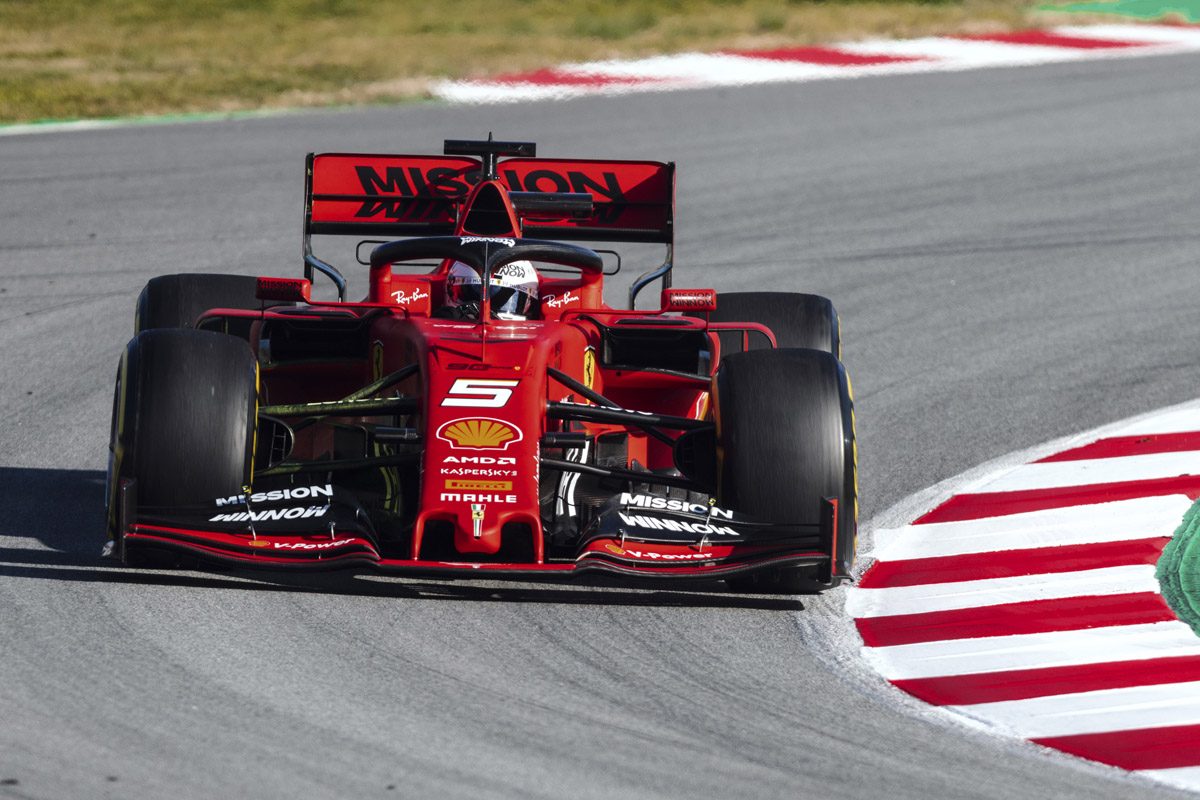 Sebastian Vettel has praised his Ferrari team after going fastest on a solid opening day of testing that saw the German bank 169 laps.

The four day test began in Barcelona overnight with nine of the 10 teams on track as Williams sat the day out due to production delays.

Though Vettel himself preached caution into reading much into the day’s times, he was buoyed by the performance of his new car.

“Obviously it’s very early, the first day, and it’s meaningless in a couple of weeks, but for now, huge compliments to everyone back at the factory,” he said at the end of the day’s running.

“The car is working. I feel comfortable. I certainly got enough laps today and I’m going to sleep well tonight. The guys are very happy.

“How they tackled the new rules and regulations and what they put on track today is very close to perfection in the first day of driving, the amount of laps we did, how the team was handling the car.

“Everything is more on the edge compared to last year’s car, tighter and so on, what you would imagine, but no major dramas, so from that point of view we are very well prepared.

“It was unbelievable, the car was working really well. We had no issues slowing us down, we actually completed the program just the way we wanted. We were able to squeeze a little bit more out even.”

Vettel had a small moment early in the day, spinning the SF90 harmlessly in an otherwise faultless day for the Scuderia that left it fastest by nearly four tenths over McLaren.

More important however was that it banked 169 laps, the most of any team on track, while Mercedes ended the day down the order with 150 laps between Lewis Hamilton and Valtteri Bottas.

Daniel Ricciardo propped up the timesheets almost three seconds off the pace, with 44 laps to his name.

“Today was about bedding ourselves back into it and, for me, continuing to learn about a new car and a new team,” he said.

“It was a decent afternoon and it’s important we keep increasing our mileage. We have plenty to analyse but it’s been a promising first official day.

“I’m excited to hit the track again and develop this new relationship.”

Kimi Raikkonen started his year by triggering a red flag in the morning when he spun the new Alfa Romeo Racing C38 into the gravel at Turn 5 shortly after the day’s session began.

He then triggered another when he stopped on track in the dying moments of the day’s proceedings.

Testing continues in Barcelona tonight (Australian time) though Williams released a statement admitting it will most likely miss the second day of testing too.

“It is looking more likely than not that we will now not be in a position to run on track until Wednesday at the earliest,” said deputy team boss Claire Williams.

“This is obviously extremely disappointing, but it is unfortunately the situation we are in. We will be getting the FW42 on track as soon as we are able.”