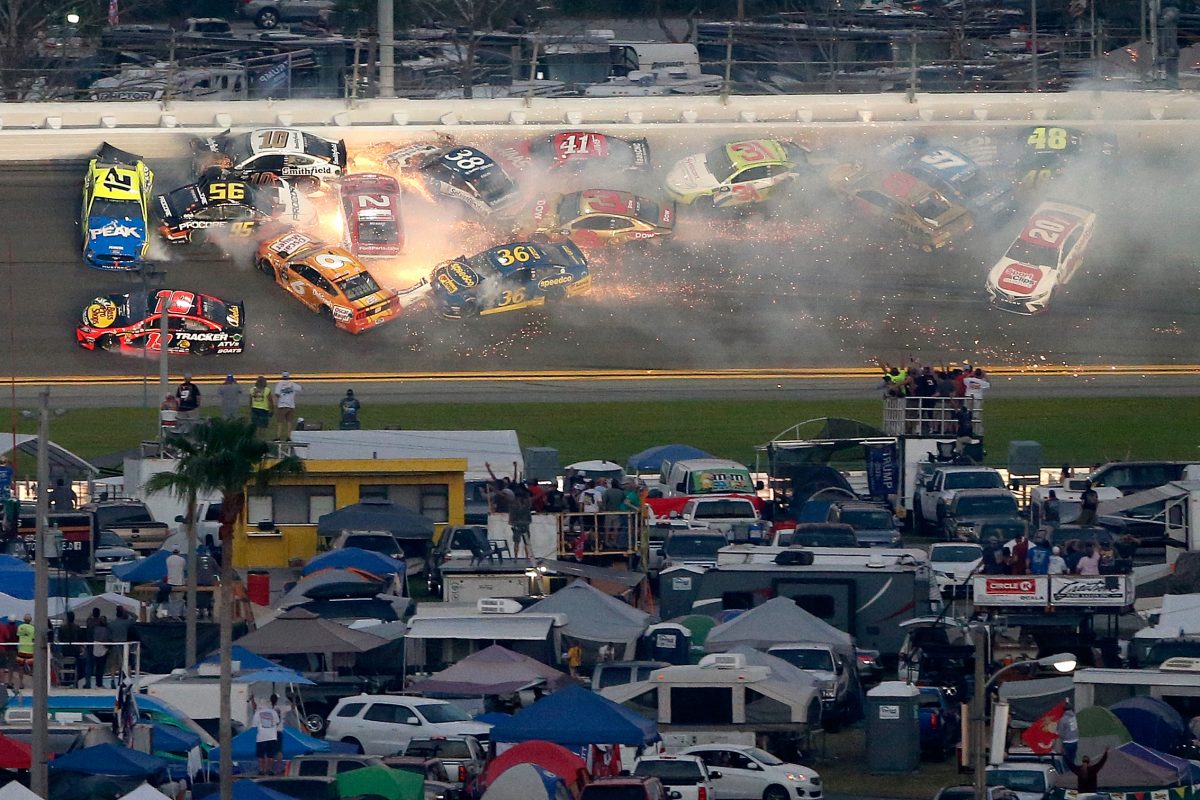 Denny Hamlin has beaten team-mate Kyle Busch to victory in an overtime finish to a crash-filled Daytona 500.

Hamlin snuck ahead of the #18 Toyota just before a Caution for another pile-up on what was to have been the penultimate lap of the race, while Erik Jones made it a Joe Gibbs Racing sweep of the top three when the race was finally completed.

The #11 Toyota had not led until Hamlin got past Jamie McMurray (#40 Spire Motorsports Chevrolet) in the laps which followed a Lap 168 restart.

That Caution period had been necessitated by a melee at pit entry which occurred under green flag.

Hamlin soon had Kyle Busch and Jones in behind him as the race moved into its final 30 scheduled laps, and maintained top spot after a Caution called for debris on Lap 174.

The race was neutralised again when Kyle Larson slapped the wall and spun due to a left-rear tyre failure on Lap 181, and again when Brad Keselowski (#2 Team Penske Ford) also lost a tyre after another three green flag laps on Lap 187.

Kyle Busch moved ahead moments before ‘the big one’ came on Lap 21 when Paul Menard (#21 Wood Brothers Racing Ford) got into the rear of Matt DiBenedetto (#95 Leavine Family Racing Toyota) as they ran on the cusp of the top five, causing an incident which caught out 21 cars.

On the restart lap, Ricky Stenhouse Jnr (#17 Roush Fenway Racing Ford) and Larson made contact at Turn 3 which caused another multi-car pile-up.

They still weren’t done and on Lap 200, Clint Bowyer (#14 Stewart-Haas Racing Ford) was turned across the nose of Michael McDowell (#34 Front Row Motorsports Ford), accounting for another seven cars.

Kyle Busch briefly dropped to fourth in the overtime finished but came back on the outside of Joey Logano to reclaim second at the final corner, 0.138s behind Hamlin.

Jones in the #20 Toyota pinched third from Logano in the #22 Ford right at the finish line, while McDowell took fifth.

Larson managed to make the chequered flag in seventh in a second-hand looking #42 Chip Ganassi Racing Chevrolet and Jimmie Johnson was ninth in the #48 Hendrick Motorsports Chevrolet.

Kyle Busch had won Stage 1 while Stage 2 went to Ryan Blaney, whose #12 Team Penske Ford was among the cars caught up in the big one, as was Martin Truex Jnr’s #19 Joe Gibbs Racing Toyota.

Hamlin and Logano are tied at the top of the standings ahead of Round 2 at Atlanta on February 22-24 (local time).

Replay: The big one

Replay: Larson and Stenhouse Jnr set off another crash on Lap 196

Replay: The pile-up which sent the race into overtime