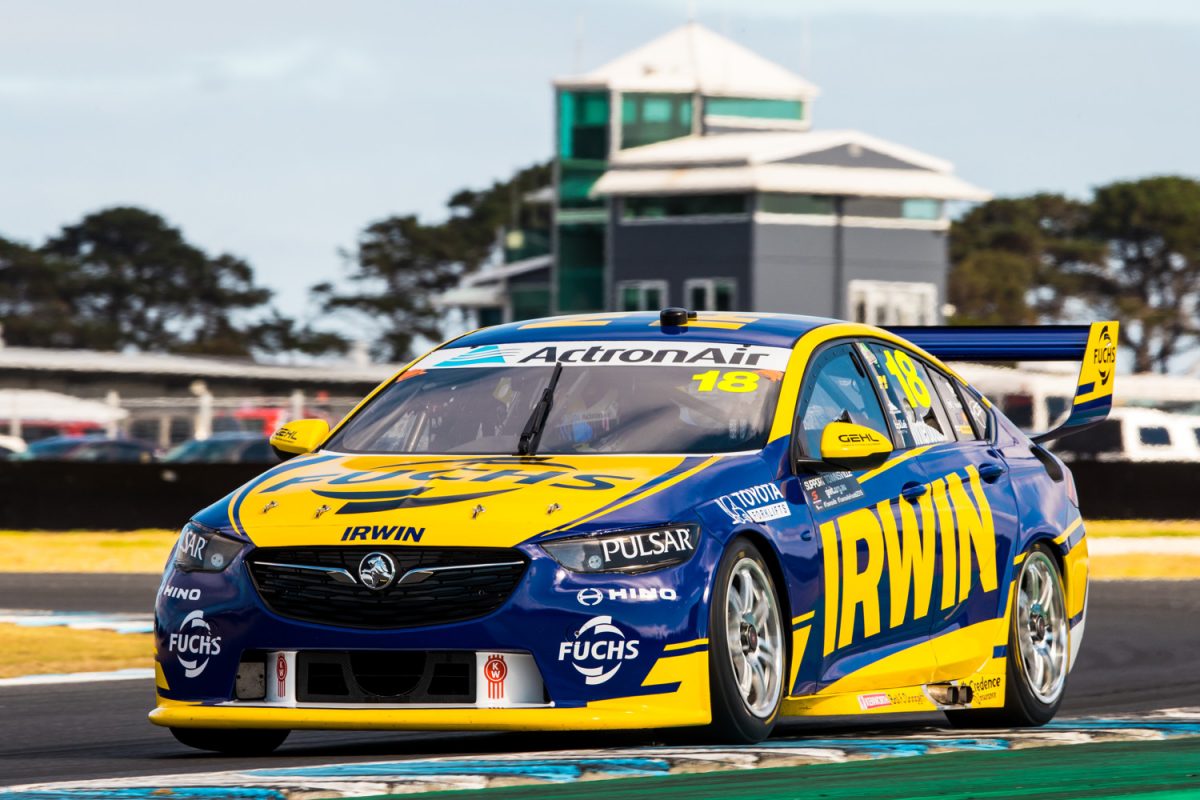 Winterbottom struck trouble on his first proper hit-out in Irwin Racing’s newly acquired ZB Commodore when it went into limp with new tyres on in the latter stages of the day.

The championship’s new MoTeC electronic control unit was first sampled by Jamie Whincup when he shook down his brand-new ZB Commodore last week at Queensland Raceway.

Gremlins arising with the device, as well as a delay due to morning showers, saw Whincup take most of the day to complete his maximum allowable 60km of running as his Triple Eight Race Engineering crew worked with Supercars on the problem.

Winterbottom finished the day in 19th position at just over 0.7s off the benchmark pace of Cameron Waters, after encountering an ECU issue and also splitter problems earlier on.

“We had like a normal test day, I guess; you have really good parts (of the day) and you have parts that aren’t so good, but we got through a lot of our list,” the new Team 18 recruit told Speedcafe.com.

“We did have a few setbacks with a few little dramas with the front splitter and then missing the green tyre run at the end with the pit limiter limp mode with the new ECU.

“Unfortunately, our problems were at crucial times but I was happy with what we got through.”

Today’s official pre-season test gave the rest of the 24-car field the opportunity to use the new ECU, although it is not compulsory until the opening event in Adelaide.

While the switch back to linear spring suspension has become a major talking point, Winterbottom believes that the new ECU also has significant implications for the driveability of the cars, let alone the impact of the current difficulties.

“It’s different, and its engine mapping, it’s got all these modes in it that we haven’t had before,” he explained.

“Some teams didn’t run it at all today and then when they put it in just at the end, they had dramas; it’s not a simple fix.

“That sort of stuff, you’d like done early enough so we can prepare; we were probably underprepared on that side and what brought us out at the end was that ECU limp mode.

“Better to happen here (than at a race meeting) but it would have been nice to have it before Christmas to actually get on top of it.”

The Red Bull Holden Racing Team cars of Whincup and Shane van Gisbergen, on the other hand, ran “faultlessly” according to Triple Eight team manager Mark Dutton, who believed that the glitches had been largely resolved after the shakedown.

“There are a few little refinements that we’re getting done throughout the day but nothing like QR.

“(At) QR, it was a fair way off what we had today, so good on MoTeC, Supercars and Craig Hasted (championship engine consultant) for burning the midnight oil to get it as far as they did in such a short amount of time, and good on our lads on Triple Eight as well; we spent a lot of time at the shakedown working with Supercars.

“We work together really well with Supercars, any of them and especially Craig Hasted, so it’s good to be the guinea pig so they could roll it out for everyone up and down pit lane, and I think almost no one had any issues so it was great.”

The first event of the 2019 Virgin Australia Supercars Championship is the Superloop Adelaide 500 on February 28-March 3.