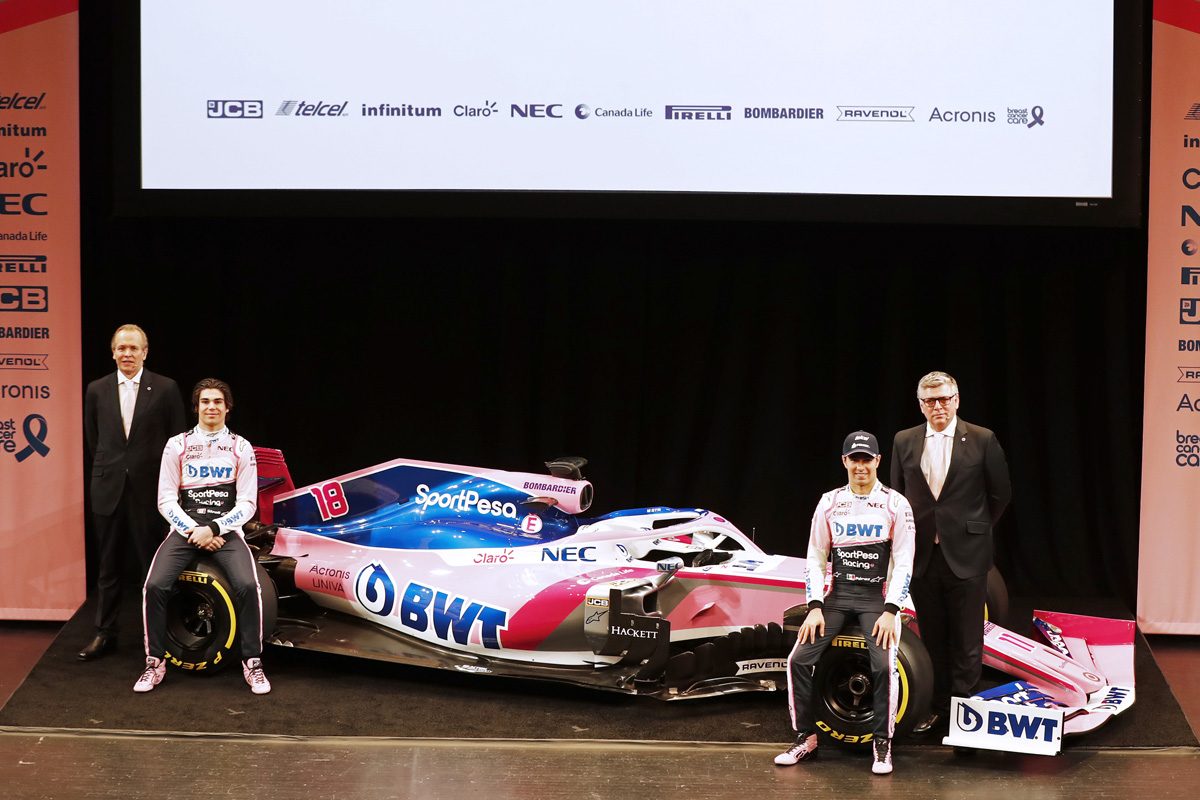 Racing Point, the team which until mid-2018 was known as Force India, has peeled back the covers on its new RP19 during an event in Toronto.

The team was saved from extinction last season with Lawrence Stroll heading a consortium which purchased its assets in the lead-up to the Belgian Grand Prix.

It created a complicated scenario which saw the team lose its points and be officially recognised as a new team, though continued to race under its old name.

Speaking at the launch, designer Andy Green admitted the turmoil the team experienced has had an impact on this year’s car.

“The change of ownership definitely affected the decisions we made last year,” Green said.

“It came a few months too late to affect the fundamental philosophy of the 2019 car, so we set out to work in the same way we had done before, when the finances of the team were very lean.

“In reality we couldn’t expect a big inflow of cash until September, so we made certain decisions about the chassis and gearbox that allowed us to keep developing.

“Whilst all this was happening we carried on adding some performance to the 2018 car by developing the parts we had.

“Often the upgrades never made it past the wind tunnel model but we had to keep car development progressing at all times, otherwise we’d just fall further behind.

“It was the only way to work given the situation we were in.”

Sergio Perez has been retained for the coming year while Lance Stroll moves across from Williams to join the team owned in-part by his father.

With fresh investment the squad’s immediate future is no longer in doubt, and Perez is looking to help drive the team forward after being instrumental in saving it.

“I’m very excited about this new chapter and ready for the challenge ahead of me,” said the Mexican.

“The start of a new season is always massively exciting and after a few months away from the track you just want to jump in the new car as soon as possible.

“Last year was very complicated, frustrating and sometimes painful, so my hope is that I can simply focus on my driving this year and on delivering the best possible results for this team.

“It feels like a new opportunity to show what this team is capable of, especially with everyone 100 percent focused on improving the car,” he added.

“There is a new team name, but I am still working with the same people and we have spent five years together now.

“They have helped me improve as a driver and we have enjoyed good moments in the past. The potential for the future is what excites me.

“I believe we can achieve something special together in the years ahead.”

After two years with Williams, and a promising junior career, Stroll is also keen to get started with his new team.

“I’m feeling really good about things. I can see how much potential we have in this team and there’s an incredible buzz in the factory and so much enthusiasm,” said the Canadian.

“I feel comfortable already and everybody has given me a great welcome. It’s the next chapter in my racing career and I just can’t wait to get in the car and start the proper work.

“I always aim high so I want us to be competitive right from the start.

“It’s way too early to know how we compare to the other teams, but right here today I believe we should be fighting for points in every race.

Under its former guise of Force India, Racing Point finished fourth in the constructors’ championship in 2016 and 2017.

Having to relinquish points earned prior to its new ownership midway through last year, the team fell to seventh.

Across the year, it scored enough points to have finished fifth in the standings despite teetering on the verge of collapse during the first half of the campaign.

The team will now return to Europe where pre-season testing begins on Monday in Barcelona.