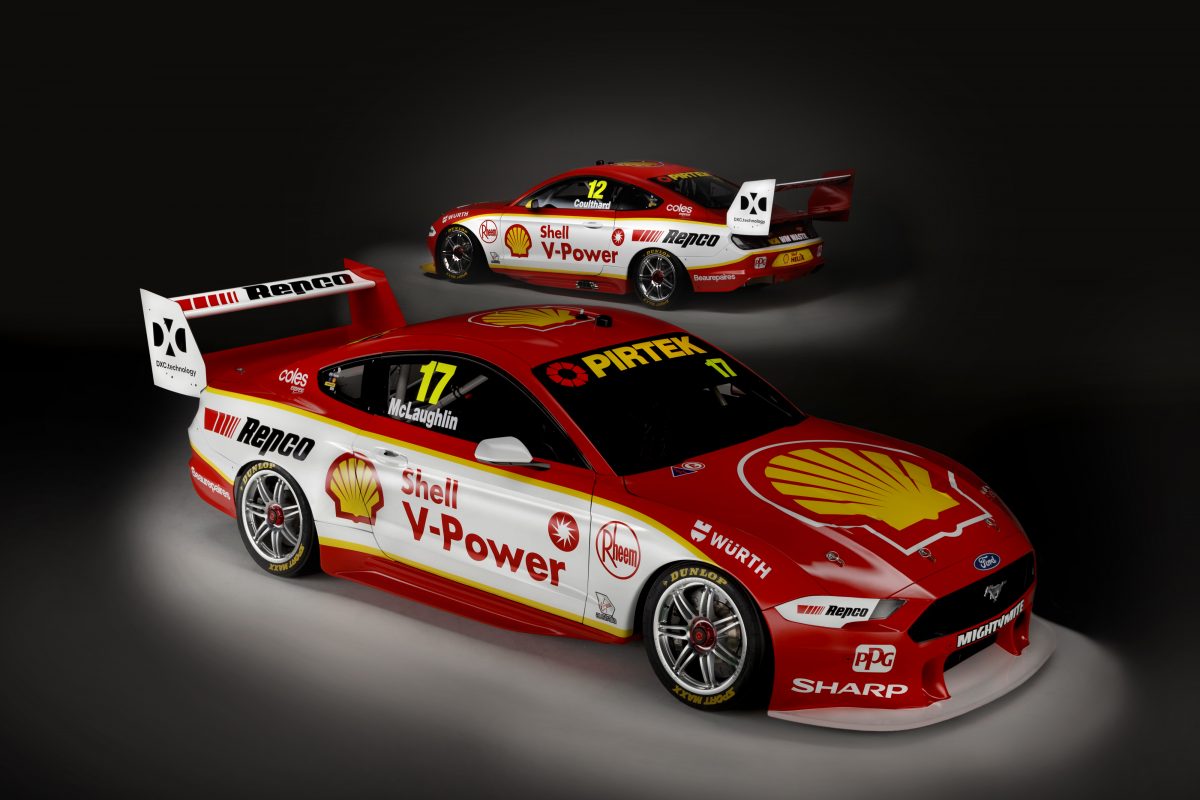 The Shell V-Power Racing Team has shown off the look which its Ford Mustangs will carry in the two-door’s maiden Virgin Australia Supercars Championship season.

Defending Supercars champion Scott McLaughlin and team-mate Fabian Coulthard will race in largely unchanged red and white liveries, tweaked to fit the lines of the Mustang.

The former will enjoy a brand-new car, which he shook down last week at Queensland Raceway in a mostly plain paintjob, while the latter carries on in a converted chassis which he piloted as an FGX last year.

DJR Team Penske Managing Director Ryan Story described the unveil of the Mustang in its racing livery as a significant moment for the team.

“We have worked tirelessly on the Mustang program over the last 12 months, and to get to this point, where we are revealing it in Shell V-Power colours is massively satisfying, and really gets the blood pumping for the year ahead,” said Story.

“We’re ecstatic with how the car has come together, and how it looks in our 2019 warpaint.

“We’ve brought on some fantastic new partners and are hopeful of continuing the success we’ve enjoyed in recent years.”

McLaughlin’s Mustang will carry Dick Johnson’s famous #17, which he opted to retain despite clinching a first championship last November.

“We’ve spent a lot of time developing this new car, and to now see it in Shell V-Power colours is awesome,” he said.

“It looks fast standing still, so I can’t wait to see how it performs on the streets of Adelaide in a couple of weeks.”

Coulthard added, “I’ve been around the sport for a long time now, and I can’t remember a build-up to a season as big as this.

“We’ve got a fantastic new car, and I can’t wait to get behind the wheel.”

This season represents the third in succession for Shell V-Power as full naming rights backer for DJRTP.

The team has claimed a teams’ championship and drivers’ championship in the first two years of the current partnership, which came after great success for Dick Johnson in Shell-backed Fords in decades prior, a point made by the head of Shell’s local licensee.

“In that time we have shared incredible success with the team, including the 2017 Teams’ title and the 2018 Drivers’ Championship won by Scott McLaughlin.

“We couldn’t be more excited to see Shell V-Power colours and branding on the brand-new Mustang, and look forward to sharing plenty of success into the future.”

Showing off the team’s Mustangs in their race liveries marks the latest milestone in the development of the Mustang for racing in Supercars.

The process was a collaborative effort between DJRTP as the official homologation team, fellow Ford outfit Tickford Racing, Ford Performance in the United States, and the Ford Asia-Pacific Design Studio.

Supercars officially ticked off on the Mustang in December after homologation testing at Queensland Raceway, Phillip Island, and the Temora Airstrip.

“In conjunction with Ford Performance in the United States, and Ford here in Australia, we have left no stone unturned in the development of the new Mustang Supercar,” explained Story.

“We are introducing the very first two-door coupe into the Supercars category, and it was a mammoth task.

“Thankfully we had an incredible team of people involved, and I must single out Sriram Pakkam and Brian Novak at Ford Performance, along with our very own Perry Kapper (Chief Design Engineer) and Ludo Lacroix (Competition Director), who have been instrumental in getting the car to where it is today.

“We have put many thousands of man hours into the design and construction of this car, and we now look forward to seeing it take to the racetrack in Australia and New Zealand to fly the Ford flag and hopefully do the ‘blue oval’ proud.”

DJRTP has also announced an unchanged Pirtek Enduro Cup roster of Alexandre Premat and Tony D’Alberto in conjunction with the Mustang launch.

Its two Ford coupes will hit the track on Thursday at Phillip Island for Supercars’ pre-season test day.