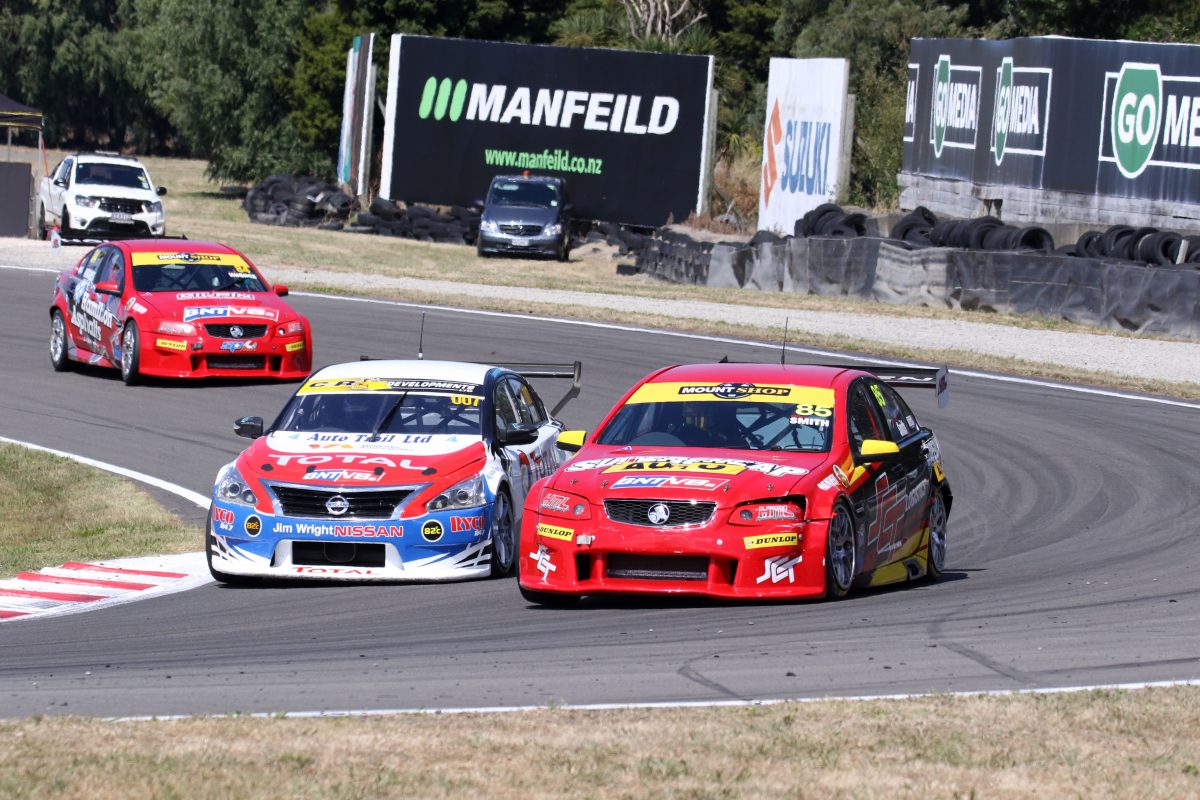 Jack Smith will take a healthy lead into the final round of the BNT V8s Championship after two race wins in Manfeild and trouble for title rival Nick Ross.

Smith stalked Ross in Race 2 of the weekend and managed to find a way past, unlike Race 1 a day earlier, before leading Hamilton Motorsports team-mate Lance Hughes to a one-two in the partial reverse gridder.

Sunday’s morning encounter saw Ross again lead the field away although Smith managed to slot into second on that occasion, followed by Hughes and Rob Wallace.

It soon became a four-car train of the #007 Concept Motorsport Altima, the #85 and #84 Hamilton Commodores, and the Class Three #3 Commodore of Tony Anderson.

Ross couldn’t get turned into Higgins Corner the way he would have liked on Lap 9, inviting Smith alongside, and they continued in that fashion all the way until The Esses, at which point the initial race leader re-established his advantage.

Smith did manage to make a move stick early on Lap 13 and that was that.

Hughes, who briefly gave up third place to Anderson, overtook Ross on the next and final lap only to be re-passed at the final bend.

Anderson was within a tenth of the top three at the finish line, while Brenton Grove took ninth after a fast spin on Lap 11 in the #10 Richards Team Motorsport Camry.

Race 3 saw the top four in Class One reversed at the head of the grid and Wallace his #51 Commodore to a clear lead from Hughes at the standing start.

Hughes took over top spot before the lap was out, while Ross and Smith swapped and swapped back in the battle for third.

Smith ranged up on Ross as Lap 2 became Lap 3 and, with the inside line into Turn 1, executed a straightforward pass.

Moments later, it became apparent that Car #007 had a problem and while Ross tried to persevere for multiple laps, he had to retire with what turn out to be a radiator failure.

Smith picked off Wallace at Turn 1 on Lap 4 before Hughes made it easy for his series-leading team-mate to take over first position through The Esses on Lap 9.

It seemed ironic then that Hughes should pressure Smith for the remaining seven laps and they would finish less than 0.4s apart.

“The weekend was good. The DNF for Nick was unfortunate, but it re-opens our gap in the championship following our DNF at Teretonga last month.

“The championship is there, but we could very nearly have a DNF like he did. There is a long way to go yet.”

Wallace grabbed third in Race 3 when Anderson slowed and crossed the stripe in fourth.

Grove had another excursion but salvaged sixth outright and therefore fourth in Class One.