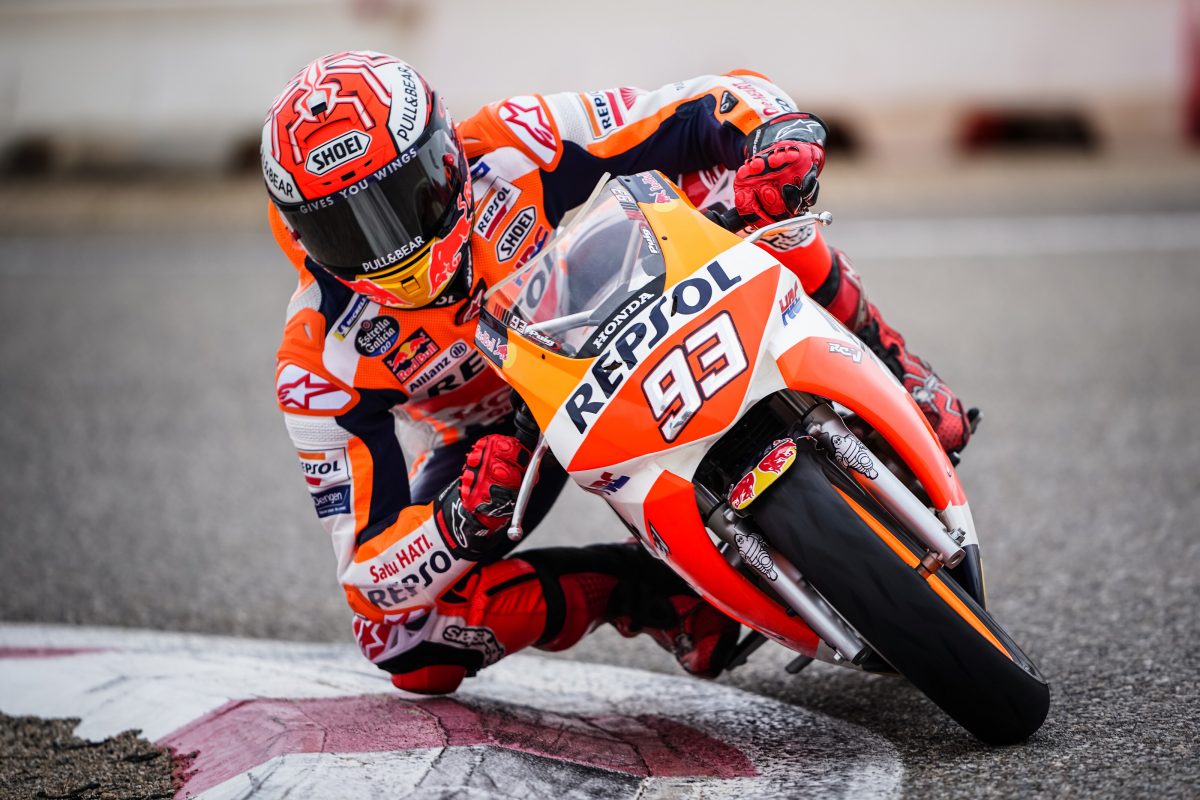 Marc Marquez rides for the first time since shoulder surgery, on a training bike

The wheels were removed from Marc Marquez’s bikes to prevent him making a premature return to riding after shoulder surgery, according to Marquez himself and his physiotherapist.

The five-time premier class champion underwent surgery on his left shoulder, which had come to dislocate at increasing frequency, during the off-season.

He stepped back onto a training bike last week ahead of the first full pre-season test of 2019 which starts today at Sepang.

Prior to that, however, his bikes had to be disassembled at the orders of his physiotherapist, Carlos J Garcia, due to the likelihood that Marquez would be tempted to ride them before he was fit enough.

“There are days when he is very patient, especially in the first phase of the recovery process,” said Garcia.

“Then, little by little, when the sling came off he was more anxious. ‘I’ve had the sling removed, I can do it!’ (he would say) and I would tell him ‘No, you can’t do it, do not move your shoulder.’

“There it was necessary to stop him a little bit because if it were up to him, on January 7th he would have been on a bike. He only wants to be on a bike.

“There were orders for all the bikes to be dismantled.

“When we went to the gym and we passed by some bikes and he climbed onto one, assumed the riding position and made noises as if he were on track. That’s how much he wants to get on a bike again.”

The Repsol Honda rider confirmed while Garcia was speaking that “They took the wheels off my bikes.”

Garcia has put Marquez’s mobility at 90 percent and muscle strength in the shoulder at 75 to 80 percent, while Marquez anticipates that he will only ride a limited number of laps in Malaysia.

“Until I get on the MotoGP bike, I won’t know what shape I’m in,” cautioned the Spaniard.

“I am aware that it will be quality over quantity in terms of the amount of laps I do. More than anything, that’s to avoid causing tendonitis or similar.

“I am also aware that if in the test I can’t put in the laps that I would like, it is only a test. We will all leave Malaysia with zero points.

“I have to be prudent and not throw away the hours I’ve spent recovering, the two months I’ve been recovering and been patient.”

His new team-mate Jorge Lorenzo will not ride this week owing to a broken scaphoid which he sustained in training in Italy last month, meaning he will be replaced by HRC test rider Stefan Bradl.

The test runs for three days.