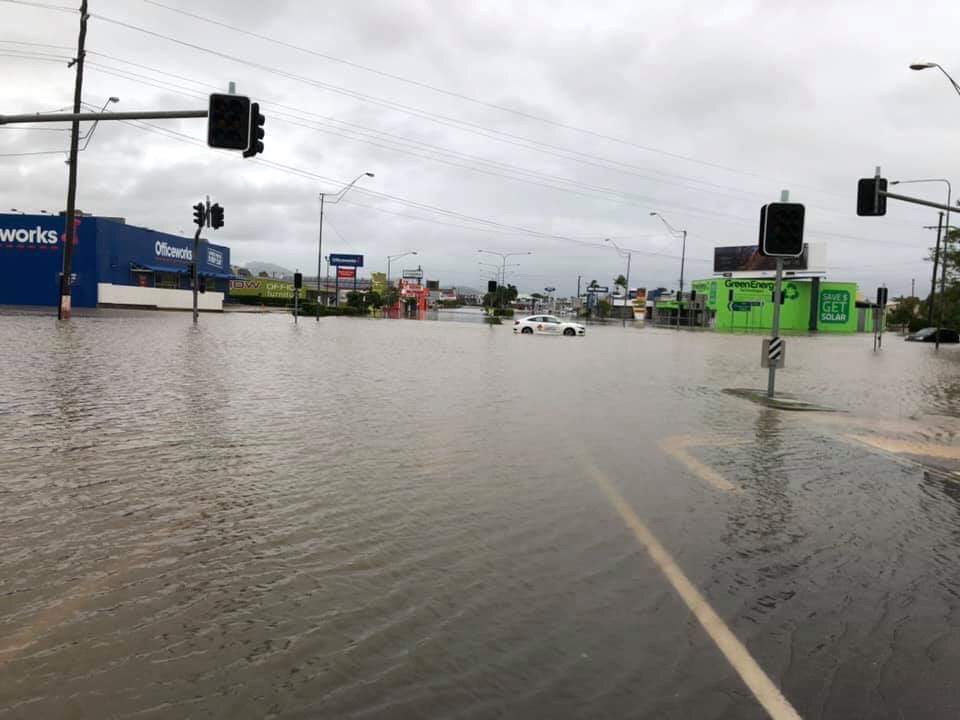 The intersection of Charters Towers Road and Boundary Street, which forms Turn 2 of the Reid Park Street Circuit (looking against circuit direction at the exit of the corner)

The Reid Park Street Circuit in Townsville has been affected by the city’s once-in-a-century flooding although waters are now believed to be receding in the immediate area.

The North Queensland city has been hit by some of the worst flooding in its history after around 1200mm of rain fell in the past seven days, resulting in the Ross River Dam gates being opened after peaking at almost 250 percent of capacity.

Over a thousand people have been staying in evacuation centres or with friends/family due to the inundation of more than 600 homes, with the suburbs south of the race track among the worst affected, particularly the Railway Estate area on the Ross River.

The disaster appears to have also claimed two lives, with the Townsville Bulletin reporting a short time ago that bodies believed to be of two men who went missing on Sunday morning have been found in a drain.

The majority of the race track is located in the northwest of Railway Estate and crosses Ross Creek at the exit of the Turn 1 sweep on Boundary Street, and also the exit of Turn 3 where it feeds into the purpose-built section of the circuit.

Triple M Townsville presenter Glenn Mintern, who has broadcast from Townsville 400 and presented on the big screen at multiple Supercars events, lives a short distance from the circuit and has experienced the extreme weather firsthand.

“Things have sort of slowed down a little bit now, the water’s sort of dropped away but in some areas it’s obviously going to take a long time for it to go, and there’s certainly no sign of some of it going at the moment.

“It’s just been extraordinary, it’s over 1200mm in less than seven days.

“The water was massive, even along Charters Towers Road, which is hard to believe.

“We were pretty much unscathed on our side of the road, but on the other side there was a heap of flooding.”

The limited images of the streets which form the circuit show that it has been underwater in recent days, although Mintern expects much of that to have largely receded by now.

Flooding has also hit the purpose-built section of the race track which backs onto the railway line near Ross Creek.

Mintern suspects, however, that the pit complex, which is a permanent structure used by TAFE and community organisations at other times of the year, would have been largely unscathed due to being slightly elevated.

“Most of the water from around the track area has probably gone now.

“I haven’t been down there today because we were just finalising cleaning up our house but the drone footage that shoots straight up the main straight from the Officeworks corner (Turn 2) shows just how much water was in that vicinity.

“I’d be very surprised if there was much, if anything, in the pit buildings itself, because that is sort of up an extra level from next to (Townsville Civic Theatre, just beyond pit lane), as opposed to the plain around it, but there certainly would have been some impact around the back of the track, along the railway station and that area.

“We couldn’t get in there to get anything yesterday, it was pretty bad yesterday.”

The streets and homes to the south of the race track, including Townsville State High School which faces the main straight, and the neighbouring suburb of South Townsville, have also been significantly affected.

Speedcafe.com has sought comment from Supercars as to whether or not it has received any advice about the state of the track and facilities.

A statement provided to this website advises that the championship is respecting the needs of residents amid the disaster.

“The region is currently in the middle of a disaster which is the number one priority, as it should be,” it began.

“We have reached out to offer any assistance we can but understandably they are busy focussing on the needs of the community.”

Mintern confirmed that he and his family are safe, albeit having been slightly inconvenienced by the waters which rose around their home.

The Watpac Townsville 400 is scheduled for July 5-7.