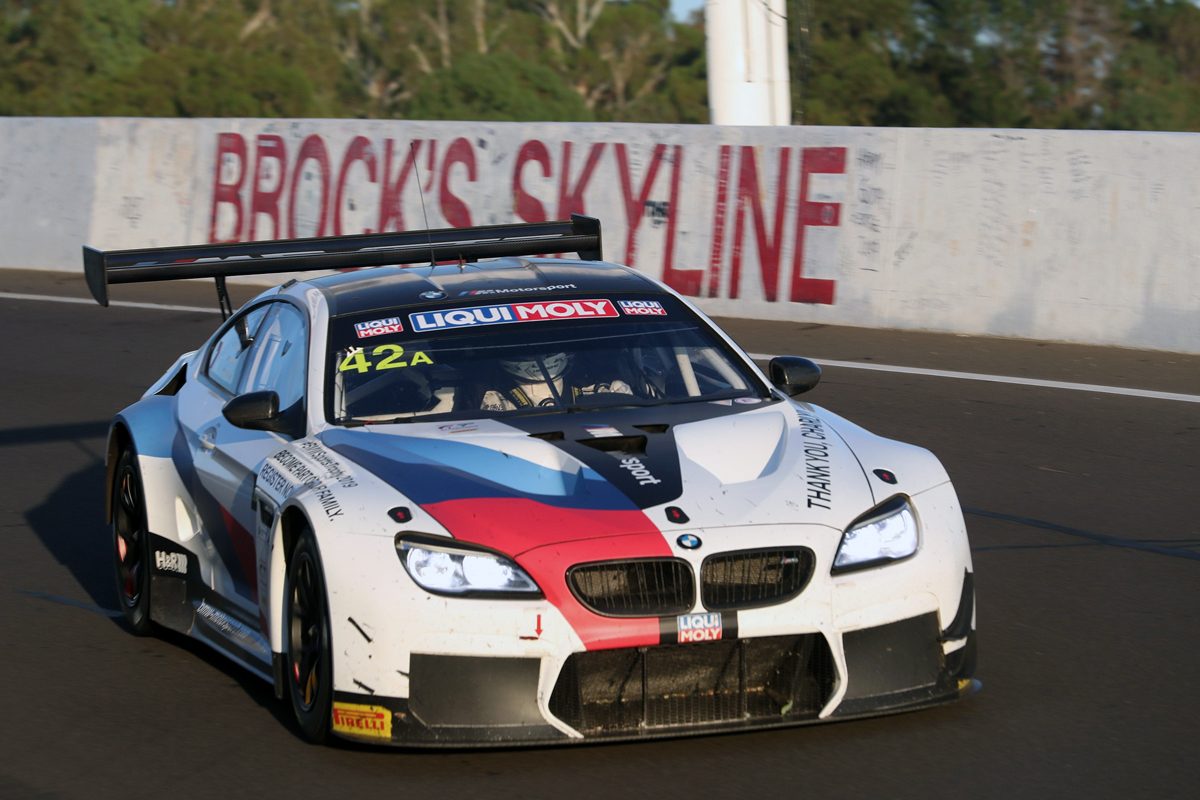 BMW Team Schnitzer has just taken over the lead of the Liqui-Moly Bathurst 12 Hour as the race moves into its fourth hour.

Martin Tomczyk in the #42 M6 heads the classification from Kelvin van der Linde in the #22 Audi Sport Team Valvoline R8 with both cars due back in the pits for a third pit stop in around five laps.

The two Bentleys and the Mercedes-AMG GT3s from GruppeM and Craft Bamboo/Black Falcon appear well-placed, however, currently in fifth, sixth, seventh, and ninth respectively with two pit stops in the books.

The top 10 right at the end of Hour 3 was the #35 Nissan GT-R with Tsugio Matsuda behind the wheel, from the #888 Team Vodafone Mercedes-AMG (Craig Lowndes), Car #42, Car #22, the #62 R-Motorsport Aston Martin Vantage (Matthieu Vaxiviere), the #18 KCMG Nissan (Edoardo Liberati), the #107 Bentley Team M-Sport Continental (Jules Gounon), the #108 Bentley (Andy Soucek), the #999 GruppeM Mercedes-AMG (Maximilian Goetz), and the #51 Spirit of Race Ferrari 488 (Paul Dalla Lana), the latter of which had pitted once so far.

Lowndes is now 10th having pitted moments ago.

Luca Stolz, who started from the outside of the front row in the #77 Craft Bamboo/Black Falcon entry, had led from the first round of pit stops and held effective first position for just over 30 laps before a damaged tyre saw him come in slightly earlier than planned.

Maximilian Buhk started the race in the pole-sitting #999 GruppeM Mercedes-AMG and held a lead of 1.5s over #77 with Luca Stolz behind the wheel after the first lap.

In what was a fairly sedate pre-dawn segment of the race, Buhk continued to lead by around one to two seconds while Steven Kane gradually drifted from the top two in the #107 Bentley.

Chaz Mostert moved the #42 BMW Team Schnitzer M6 into the top 10 from 15th on the grid in the first half-hour, while the two Audi Sport Team Valvoline entries battled for pace.

Triple Eight’s Mercedes-AMG GT3 appeared to have found some of the lap speed which it lacked in qualifying as Shane van Gisbergen temporarily held the fastest lap in 15th position after starting 17th.

However, the New Zealander touched the edge of the grass at Hell Corner and ran long on Lap 16, dropping to 20th, before he became the first to make a planned pit stop after 22 laps.

The first pit stops cycle became more earnest around the Lap 30 mark, with Mostert an effective eighth when he dropped into pit lane after 31 laps.

Just over a second separated Buhk from second-placed Stolz when the latter received service for the first time at the end of Lap 32, but Buhk emerged 1.5s behind Stolz when #999 took fuel only a lap later.

Back in the nominal top two as well as effectively, the leading Mercedes-AMGs closed right up when they caught Yasser Shahin, who had just taken over the #777 Bend Motorsport Park/Erebus/STM Mercedes-AMG from Luke Youlden, on Lap 38.

Stolz lapped the gentleman driver at the end of Skyline and while Buhk had to wait, it mattered not when the first Safety Car was called on Lap 39 as a result of David Calvert-Jones spinning at Sulman Park/McPhillamy Park and putting the #12 Competition Motorsports Porsche 911 GT3 R into the inside wall.

Behind #77 and #999 were the two Bentleys with Kane in #107 heading Vincent Abril in #108, which had each been around 18 seconds off the lead again before the yellow, after the latter made his way to fifth during his first stint.

The two Valvoline Audis of Frederic Vervisch and Christopher Haase followed, the latter having stretched his first tank longer than most at 35 laps, while Tomczyk was seventh from the #62 R-Motorsport Aston Martin Vantage, the #912 EBM Porsche 911 GT3 R, and the #911 EBM Porsche 911 GT3 R.

Van Gisbergen pitted from 15th under Safety Car for another swig of fuel and handed over to Craig Lowndes, who resumed last of those on the lead lap in 19th before Kenny Habul also came to the line in the #75 SunEnergy1 Mercedes-AMG GT3 which also comes out of the Scott Taylor Motorsport stable.

The race restarted on Lap 43, just before the 100-minute mark, and the pattern for the 15 minutes of green flag running which followed was Stolz holding a half-second lead as Buhk mid-tracked the GruppeM Mercedes-AMG at Griffins to ensure he couldn’t be passed by Kane, while Abril followed close behind.

The second Safety Car came when Nick Percat in the tangled with Mathijis Bakker as he tried to lap the Dutchman above Forrest’s Elbow, putting both the #27 HubAuto Corsa Ferrari 488 and the #96 MARC Car in the wall.

Vervisch was the highest-positioned of those to pit, from sixth in the #22 R8, while Tomczyk, Kirchhoefer (#62 Aston Martin), and Oliver Jarvis (#18 Nissan) were also into the lane.

Those stops left Lowndes ninth in the official running order and second of those with two pit stops to his name, one position behind the leader of those to have done so in Tsugio Matsuda in the #35 KCMG Nissan GT-R.

Less than half a lap of green flag running was had on Lap 54 before the Safety Car was called again after Andreas Baenziger didn’t even make the restart.

In an incident unseen by television cameras, the Pro-Am #760 R-Motorsport Aston Martin Vantage ended up in the wall at the exit of The Chase.

Kane had dragged past Buhk up Mountain Straight in the nick of time, before a bizarre moment when second through fourth pitted under full-circuit yellows.

Not only did #107 hand back the position which Kane had worked so long to gain from #999, it fell behind the sister Continental, but only as far as pit exit.

With Soucek behind the wheel, Car #108 stopped when the Spaniard accidentally shut the car down rather than turning just the limiter off, which allowed Gounon to squeeze past in #107 as they resumed 16th, 17th, and 18th, at the back of those still on the lead lap.

Lowndes and Tomczyk tangled on the second lap after the Safety Car, when the latter jinked past the seven-time Supercheap Bathurst 1000 winner at The Chase.

However, Tomczyk made a poor exit and Lowndes gave him a nudge which put the #42 BMW onto the grass on driver’s right, a moment which the German managed to catch and only lose the one position to #888 despite van der Linde lurking behind.

Walkenhorst Motorsport was the first contender to drop out of the reckoning when Nick Catsburg had to bring the #34 BMW M6 GT3 into pit lane with a recurrence of oil pump problems experienced a day earlier.