Porsches in strong position with three hours to go at Bathurst

Porsches in strong position with three hours to go at Bathurst 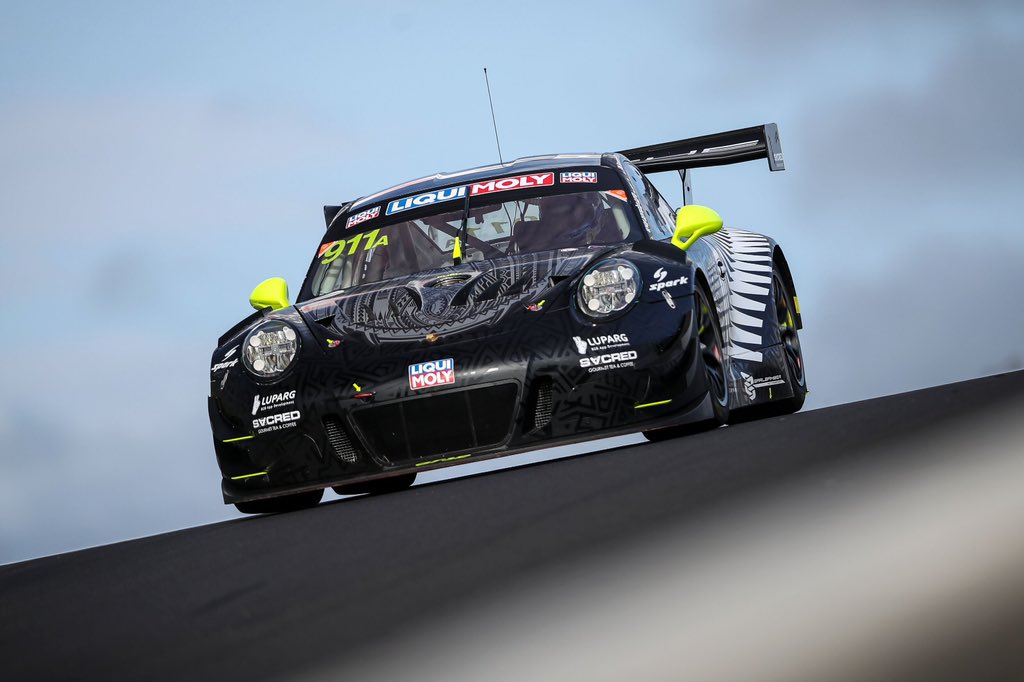 A Lap 188 Safety Car period, around the seven-and-a-half hour mark, served to split up the strategies of the nine cars which were still on the lead lap at the time when the two black Porsches did not pit.

Matthieu Jaminet in the #911 911 GT3 R now holds a lead of around five seconds over Matt Campbell in the sister #912 machine, with Marvin Kirchhoefer nine behind in the #62 R-Motorsport Aston Martin Vantage.

The list of contenders is down to eight with technical problems striking the #2 Audi Sport Team Valvoline R8, the #75 SunEnergy1 Mercedes-AMG, and the #77 Craft Bamboo/Black Falcon Mercedes-AMG since the halfway mark, while the #107 Bentley Team M-Sport Continental has fallen to two laps down in ninth position.

A short time ago, Edoardo Liberati was fourth in the #18 KCMG Nissan GT-R from Vincent Abril in the #108 Bentley Team M-Sport Continental, Martin Tomczyk in the #42 BMW Team Schnitzer M6, Maximilian Buhk in the #999 GruppeM Mercedes-AMG GT3, and Jamie Whincup in the #888 Team Vodafone Mercedes-AMG GT3.

The battle between Augusto Farfus in the #42 BMW and Maxime Soulet in the #108 Bentley continued into the seventh hour of the race.

Soulet finally managed to take the lead just before he pitted on Lap 156, and Farfus came in a lap later, handing first position to the #62 Aston Martin with Jake Dennis behind the wheel.

Dennis, however, had a fight on his hands from Maro Engel in the #77 Mercedes-AMG and Dirk Werner in the #912 Porsche, leading to a nervous moment for the latter when he ran long at Murray’s having been squeezed by a lapped X-Bow.

The German held position but fell off the back of the stoush before the sixth Safety Car was called on Lap 168, just past 6.5 hours, when the Invitational class leading #91 MARC II Car stopped on the run to The Cutting with a gearbox problem.

Craft Bamboo/Black Falcon and Triple Eight had anticipated the call, calling Engel and fourth-placed Jamie Whincup in respectively, while another five of the 10 cars remaining on the lead lap pitted once the Safety Car had been sent out.

Abril blazed up the outside of Olsen at Griffins when the race restarted on Lap 173, nosing ahead before nearly skating into the wall and dropping back behind the black Porsche.

He successfully negotiated the same move a lap later and set off after Vaxiviere, who fought his French compatriot before relenting at Murray’s Corner on Lap 179.

While all that was going on, Lowndes dropped four positions in the two laps after the restart to run ninth in the red and chrome Mercedes-AMG.

Another hopeful bit the dust on Lap 186 when Paffett pulled an overheating #77 Mercedes-AMG, believed to be due to a water pump belt failure, off the track, which triggered a Safety Car.

While that wiped out the 13-second lead which Abril had amassed, the timing of the neutralisation was fortuitous for the #108 Bentley.

Unfortunately for the sister #107 car, only seven of the nine cars left on the lead lap took the chance to pit, and the two EBM Porsches which stayed out ensured that the second Continental remained a lap down in 10th.

Imperatori was on a charge and, having passed Olsen, caught Muller six laps after the Lap 192 restart.

Kirchhoefer somehow passed Farfus in heavy traffic at Murray’s on Lap 200 to go to fifth position, but the #75 Mercedes-AMG was going the other way with what turned out to be a rock through the radiator.

Olsen pitted from third, around 13 seconds from leader Muller, to hand over to Matt Campbell on Lap 205, while Muller was in a lap later and vacated his Porsche for Mathieu Jaminet.

Jaminet was seventh and Campbell eighth, but the race came back to them as the rest pitted in front.

Abril is on a recovery drive after the #108 Bentley incurred a drive-through penalty for a breach of Safety Car protocol during the most recent full-circuit yellow, as did the #999 Mercedes-AMG.

The former benefited from the work of Soucek in the preceding stint when #108 ended up in another battle with the #42 BMW, in which the big British car prevailed.

Of the other GT3s to encounter recent dramas, Car #107 had a suspected fuel pick-up issue which saw it temporarily drop a second lap, while the #2 Audi was into the garage shortly after halfway and is now eight laps down.

The sister #22 car’s day unraveled even further when Frederic Vervisch ran through the gravel and glanced the wall at Skyline.