Bathurst 12 Hour on knife edge at halfway as BMW leads

Bathurst 12 Hour on knife edge at halfway as BMW leads 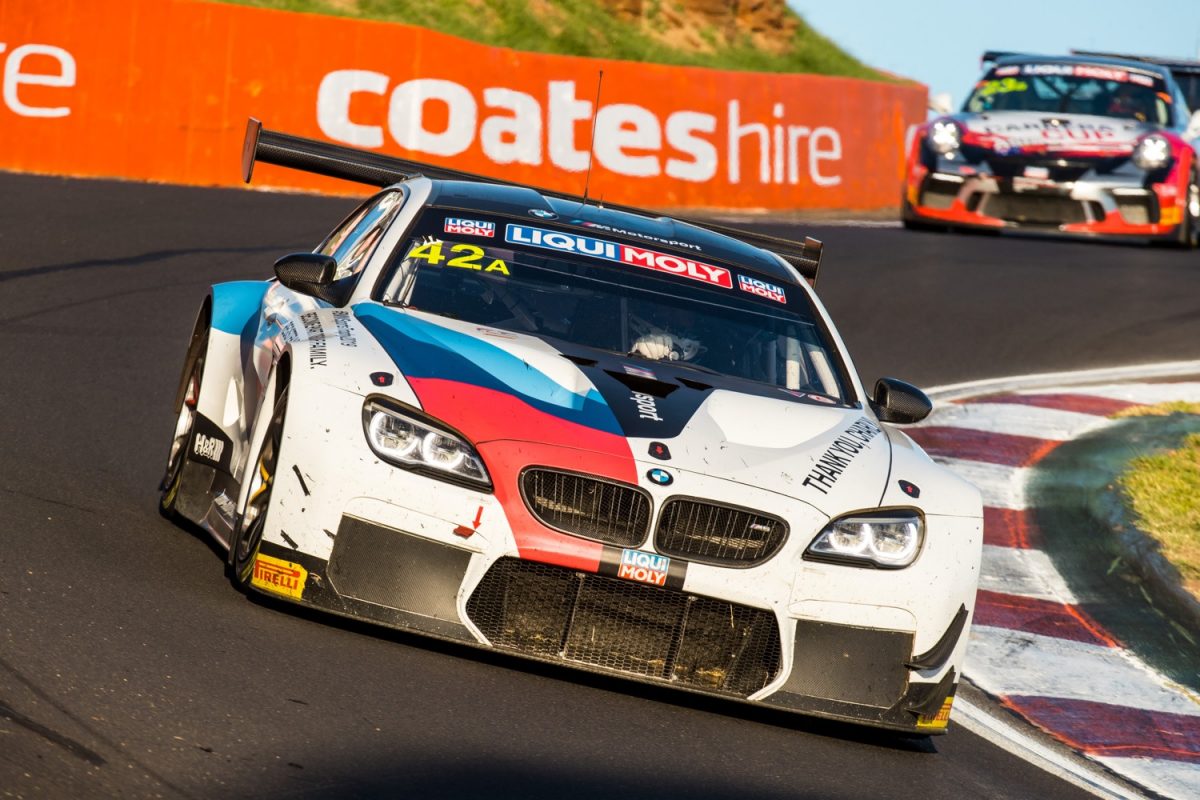 BMW Team Schnitzer is clinging to the lead at the halfway mark of the Liqui-Moly Bathurst 12 Hour as a dozen cars still vie for outright victory.

There are 11 Pro class entries on the lead lap while the Pro-Am #75 SunEnergy1 Mercedes-AMG, which is believed to has seen amateur driver Kenny Habul complete his requisite driving time for the day, fell off the lead lap just after the six-hour mark but should get it back soon with pit stops coming.

Augusto Farfus in the #42 M6 has been fighting tooth and nail to hold on to first position in the face of sustained attacks from Maxime Soulet in the #108 Bentley Team M-Sport Continental.

Pro class cars now out of the hunt include the #22 Audi and the #35 Nissan, while the #888 Mercedes-AMG survived a number of scares.

Schnitzer assumed the race lead with Martin Tomczyk behind the wheel of the #42 M6 early in the fourth hour of the motor race, before he pitted the car for a third time with 86 laps in the books and Augusto Farfus took the wheel in sixth position.

That gave top spot to Kelvin van der Linde in the #22 Audi Sport Team Valvoline R8, who had almost half a minute on the two Bentleys and another few seconds on the #999 Mercedes-AMG with those cars each having pitted twice.

When Gary Paffett made the third pit stop for the #77 Mercedes-AMG just before the four-hour mark, the lead came back to Farfus, from Tsugio Matsuda in the #35 KCMG Nissan GT-R.

Matsuda squeezed past Farfus on driver’s left as they ran over the hump on Mountain Straight on Lap 106, but almost as soon as he did so he was back into the pits for Car #35’s fourth pit stop.

Each of the aforementioned cars plus several more could be considered contenders at that time, although divergent strategies muddied the effective running order.

Garth Tander inadvertently played a pivotal role in bringing most of the competitors back together on strategy for a period of time as a result of an unfortunate incident with a Pro-Am entry at The Cutting on Lap 112.

Christina Nielsen had not long been sent back on-track in the #19 Mercedes-AMG GT3, which had been in pit lane with the Team 19/Black Falcon crew looking under the bonnet, when she found a five-car train battling for second ranging up on her.

Matthieu Vaxiviere in the #62 R-Motorsport Aston Martin Vantage cleared Car #19 on the run to The Cutting but third placed Tander nailed the left-rear corner of the Mercedes-AMG at significant closing speed.

The incident saw Nielsen back into the pits while Tander circulated for a couple more laps before relenting with a chunk of the front bar missing from the Audi, which was pushed into the Melbourne Performance Centre garage after several minutes trying to implement a quick fix.

It also changed the complexion of the race with #22 suspected to have dropped the debris on Conrod Straight which drew the Safety Car out of pit lane for the fourth time, and most of the front-runners into the pit lane.

Farfus managed to hang on to the lead in the #42 BMW and the #999 Mercedes-AMG rose from third to second.

Those who ended up third and fourth did not pit, leaving Christopher Mies slightly off-sequence in the #2 Audi Sport Team Valvoline R8, followed by Jake Dennis after the #62 Vantage had been serviced only seven laps earlier.

The #888 Mercedes-AMG was 11th and second-last of those still on the lead lap after Triple Eight experienced brake problems and Craig Lowndes had to step out of the car early into the second part of his double stint having not had a coolsuit at the time.

With Whincup in the car and trying to stay in touch with the front-runners, they were handed a lifeline when team principal Roland Dane convinced officials to review a black flag handed to them for an infringement under that Safety Car, which was ultimately reversed.

While the top five stayed remained covered by about 2.5s, there were no positional changes until the next Safety Car period was called on Lap 140 when Danny Stutterd put the Class B Ashley Seward Motorsport Porsche in the wall at the top of the mountain.

Stutterd had been trying to stay out of the way of the leaders as Dennis came through at the Sulman Park/McPhillamy Park section, but ended up in the grey and understeered into the concrete at John Hinxman Vista.

The #911 Porsche came into the garage to effect a disc and rotor change on all four corners before Dumas was sent back out in 12th, still on the lead lap.

The German was handed a drive-through, but only after he and Farfus made side-by-side contact as he tried to pass up Mountain Straight on the restart lap, and he only served it after unsuccessfully fighting to try and stave off Soulet in the battle for second.

Out of contention is the #35 KCMG entry which had become something of a dark horse after suffering electrical problems which cut power to the Nissan GT-R.