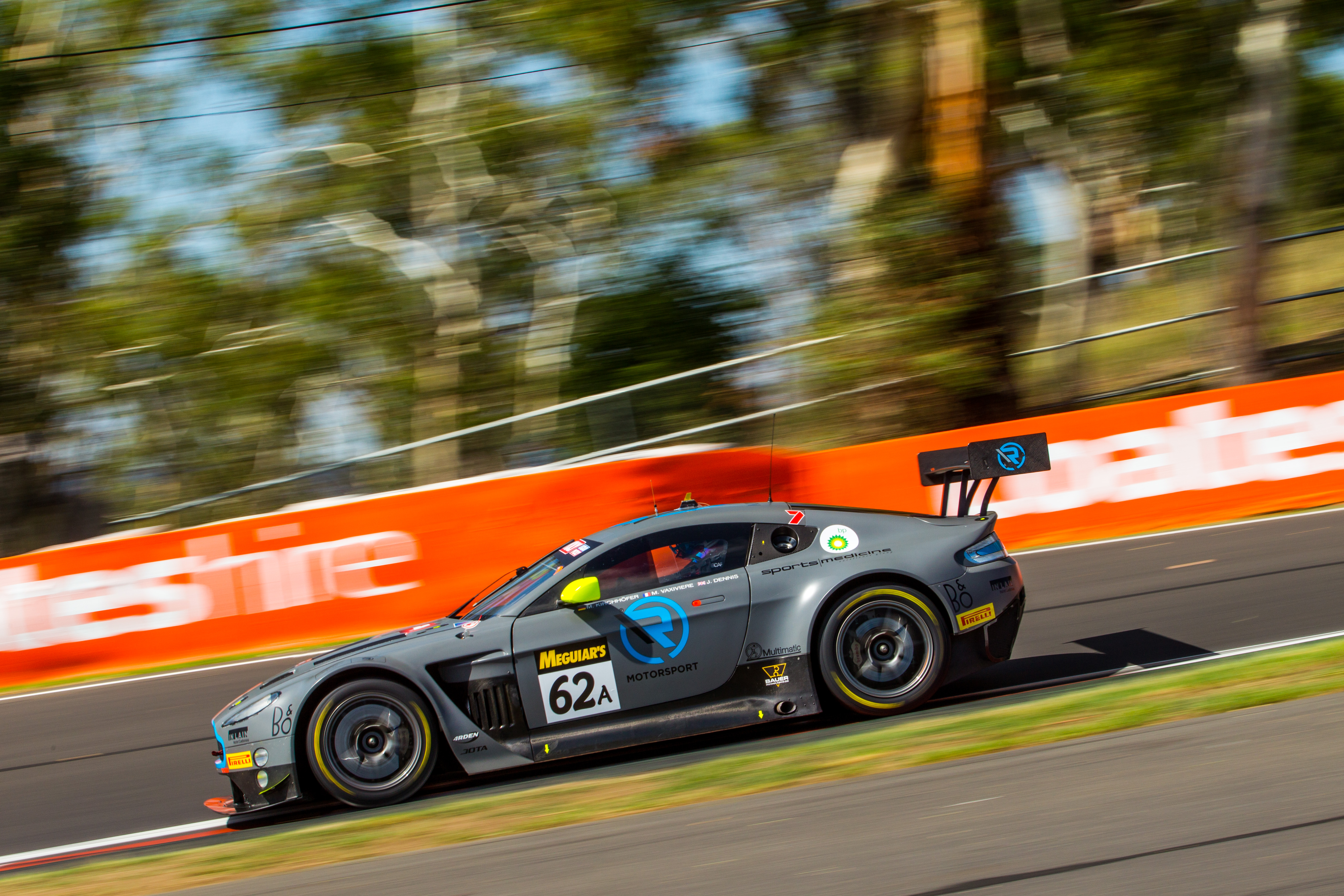 Swiss team R-Motorsport are gunning to send off the Aston Martin V12 Vantage GT3 in style with an upset victory at the Liqui-Moly Bathurst 12 Hour.

This weekend’s Bathurst 12 Hour will be the last for the older generation Aston Martin as a current spec car, with a new 2019 Vantage to supersede it.

The Blancpain GT Series race-winning team have brought a pair of the V12 machines to Mount Panorama this weekend for a last hurrah outing.

R-Motorsport’s pro-entered car driven by Jake Dennis, Marvin Kirchhöfer and Matthieu Vaxivière showed strong pace across Friday practice, finishing up seventh fastest for the day and netting the same position in final practice on Saturday, 0.4s off the top spot.

Dennis believes they are one hundred percent in with a chance of clinching the win in Sunday’s 12-hour marathon but acknowledged the fact they are working with older technology compared to most of the Class A field.

“The old girl has been around for a few years now, but we want to try and send her off in style and get it on the podium at least. Try and go for the win,” Dennis told Speedcafe.com.

“Even though it’s old, it still goes really well. The pace of the car is strong. It’s fast where it’s important to be fast, so it’s fast down the straights. A little bit slow on the corners.

“It’s so difficult to pass here, over the Mountain section; I think for the race we’ll be even better.

“Hundred percent (we have a fighting chance). I think we showed that,” he added.

“We were straight away one of the quickest. We, as drivers, still have so much more to find within ourselves, whereas you get the Haase, the Mies, the Whincup cars, it’s like their fourth or fifth time here, so they don’t have too much more to expand, whereas I’ve only done six laps today (Friday).

“My team-mates have done some more, so for sure there’s a lot more potential in us than there are in them.

“So if we’re already top six or seven I think for sure (we have a chance). I don’t think we’ll try and get pole. That would be nice, but it’s not crucial, because the race is so long.”

The Brit is expecting Sunday’s race to be a grueling one with hot conditions also forecast.

“It’s quite unique this race because the first nine hours are just managing the car, and making sure you’re there on the lead lap at the end of the race,” Dennis said.

“Then the last three hours are just like cutthroat, you know? They’re so brutal, they’re so fast.

“It’s like a qualifying lap for the last three hours. You sort of need to make sure you look after the car for the first nine, then be there at the end.”

Qualifying 1 gets underway at 1120 AEDT.