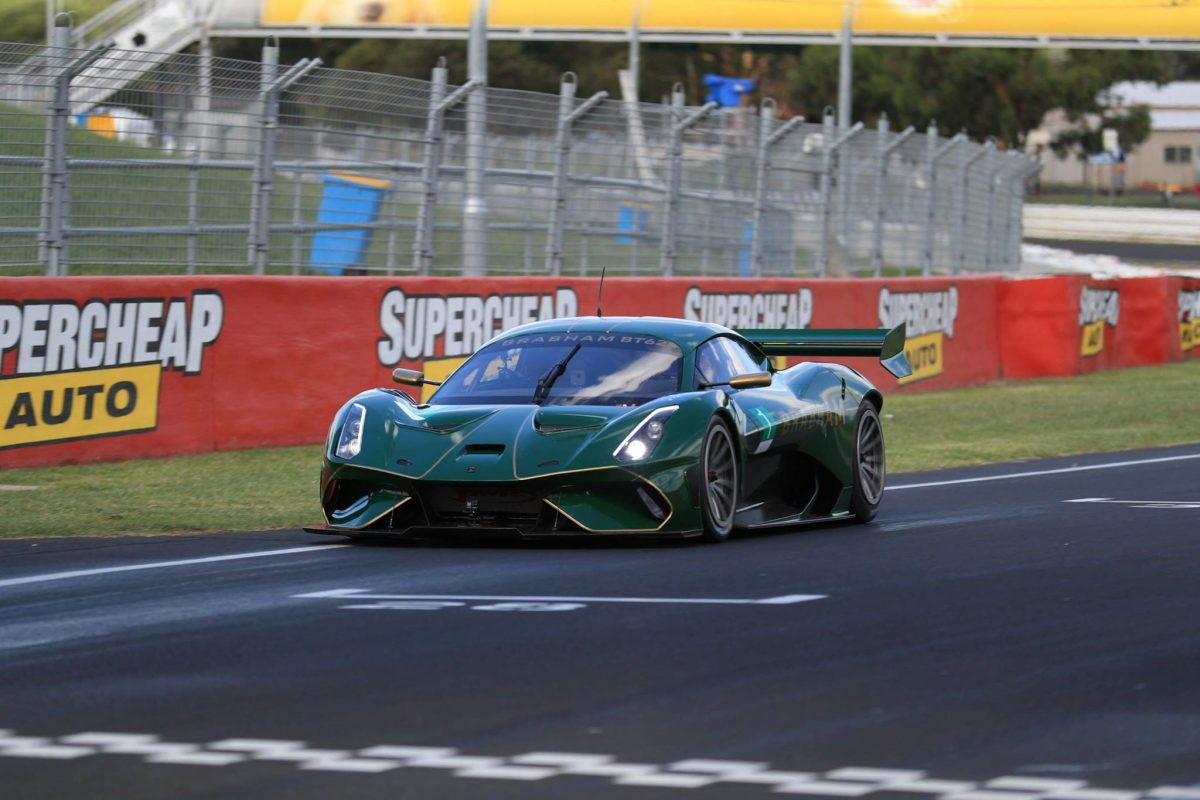 The Brabham BT62 at Bathurst

The all-new Brabham BT62 is plotting to etch itself in Mount Panorama folklore by eclipsing the official track record time at the Liqui-Moly Bathurst 12 Hour.

David Brabham has brought his state-of-the-art Australian-built sportscar to the 6.2km circuit to showcase its potential by aiming to surpass the 1:59.2910s outright official track record.

That benchmark was set by factory Audi driver Christopher Mies in an unrestricted R8 GT3 during the Challenge Bathurst event in November.

Brabham’s V8 powered 700 horsepower track car will be driven by Luke Youlden in a 10 minute session and has already posted a sub two minute lap (1:59.36s) during a practice run on Thursday.

Brabham believes there is more pace in the car when it returns to the track today at 1030 local time for its final session.

However, should the BT62 eclipse the time it won’t be classed as an official lap record.

To be classified as an official lap record the time would need to be recorded in a competitive session.

It would be regarded in the same light as Jenson Button’s unofficial lap record of 1:48.8s, set in a McLaren Formula 1 car in 2011.

“It’s all about getting out there and not only showing people what we’re doing, but also what the car is capable of,” Brabham told Speedcafe.com.

“It’s a great opportunity for us to be here at Bathurst and be able to do that. The BT62 in the garage at Bathurst

“I think Luke will be more comfortable in the car, the set up will be better because it wasn’t quite right.

“Obviously, it’s the first time we’ve run here. We’ll just have to wait and see what he can do.

“I mean, for sure there’s more time, so I’m pretty confident that the car will be quicker.

“How much quicker, I don’t know?

“Luke said there was more in him. He only did seven laps.

“It’s a great trophy for the car, absolutely,” he added when asked what it would mean to go under the outright official lap record time.

Last month Brabham Automotive confirmed that it will now offer a road going version of the sportscar.

It also plans to enter the 2021/22 FIA World Endurance Championship.