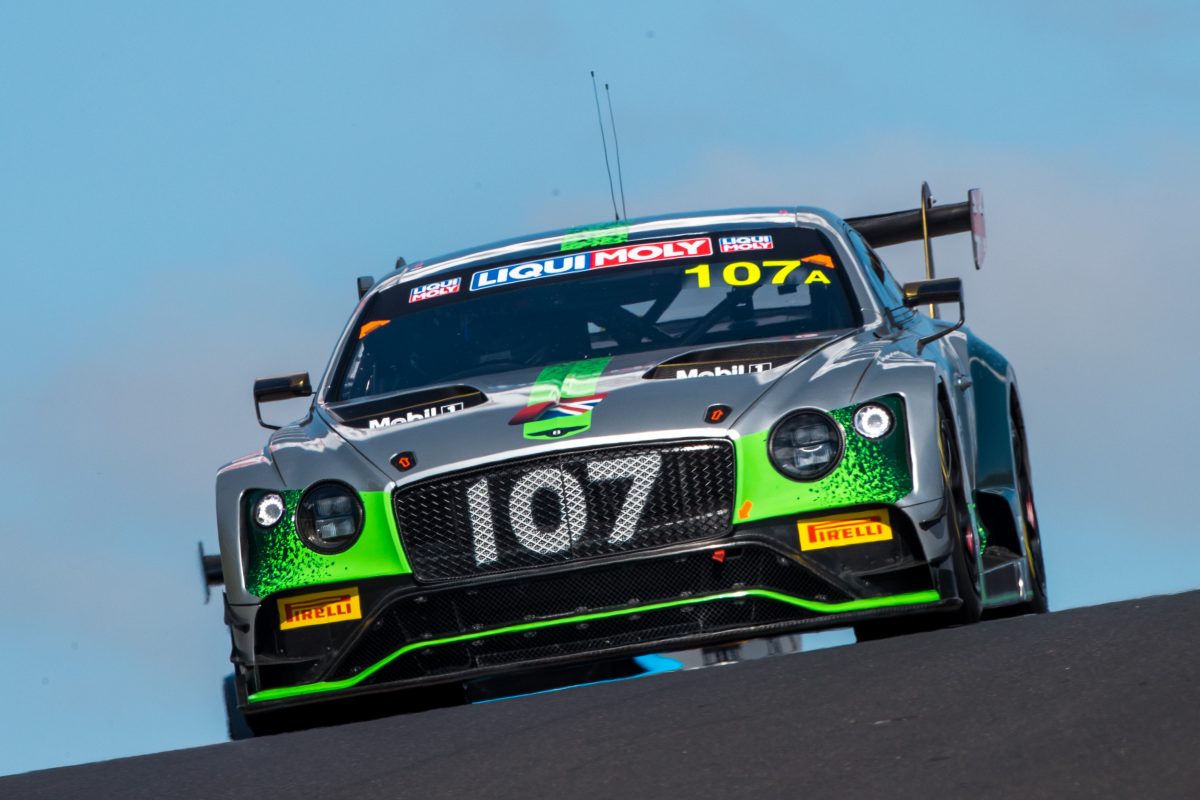 Bentley Team M-Sport has set the pace in the fifth and final practice session for the Liqui-Moly Bathurst 12 Hour courtesy of Jules Gounon.

The Frenchman lapped Mount Panorama in a best time of 2:03.0801s to put the #107 Continental GT3 ahead of the two Audi Sport Team Valvoline entries, while Chaz Mostert was fourth-fastest in the BMW Team Schnitzer M6.

Shane van Gisbergen brought the Team Vodafone Mercedes-AMG up to eighth with the chequered flag out, after Car #888 spent much of the hour-long session sitting around 20th position.

The #107 Bentley had been 13th when Gounon reeled out the fastest lap of the session at the start of the final quarter-hour, which was 0.3135s better than Christopher Haase’s previous benchmark which had stood since the 24th minute.

Steven Kane threatened to go even better when he hopped into the big Bentley to finish the session, setting the fastest first sector but ultimately not improving.

Haase had got proceedings underway with the quickest initial flyer at 2:05.0049s in the #2 R8, which stood for around 10 minutes.

Neither of the two BMW M6s in the field had threatened for the first 40 minutes until Mostert put Car #42 into fourth position with a 2:03.4602s with just over five minutes remaining.

KCMG’s #18 Nissan GT-R took up sixth, from the #62 R-Motorsport Aston Martin Vantage and the #888 Mercedes-AMG.

Andy Soucek was a late mover in the #108 Bentley, which ended up ninth-fastest, while Tim Slade rounded out the top 10 in the #27 HubAuto Corsa Ferrari 488.

Maxi Goetz improved on that early flyer from Raffaele Marciello, before the bright yellow AMG was ultimately shuffled back to 11th, one position ahead of the leading Pro-Am entry in the former of the Competition Motorsports Porsche 911 GT3 R, with Kevin Estre behind the wheel.

The session wasn’t without interruption as a red flag was called with just over 20 minutes remaining after an incident at The Chase between the #51 Spirit of Race Ferrari 488 and the #50 KTM X-Bow.

Paul Dalla Lana in the Ferrari was closing on David Crampton in the KTM, resulting in side-to-side contact at the turn off Conrod Straight which sent the latter through the infield gravel trap.

The KTM spun on its way through the gravel, resulting in a jarring impact with the backside of the left-hander’s inside kerb before Crampton came to rest on the race track, causing Steve Owen to take to the grass to avoid contact in the #20 MARC II.

Both Crampton and Dalla Lana have been summoned to see the stewards after practice, while the session restarted just over 10 minutes later with no net time loss.

Walkenhorst’s BMW M6 spent around half the session in the garage as the crew worked on an oil pump problem in Car #34, before Nicky Catsburg was let back out on track to set a time good enough for 21st position.

Qualifying 1, for all cars, is scheduled for 1120 local time/AEDT and will run for 45 minutes.