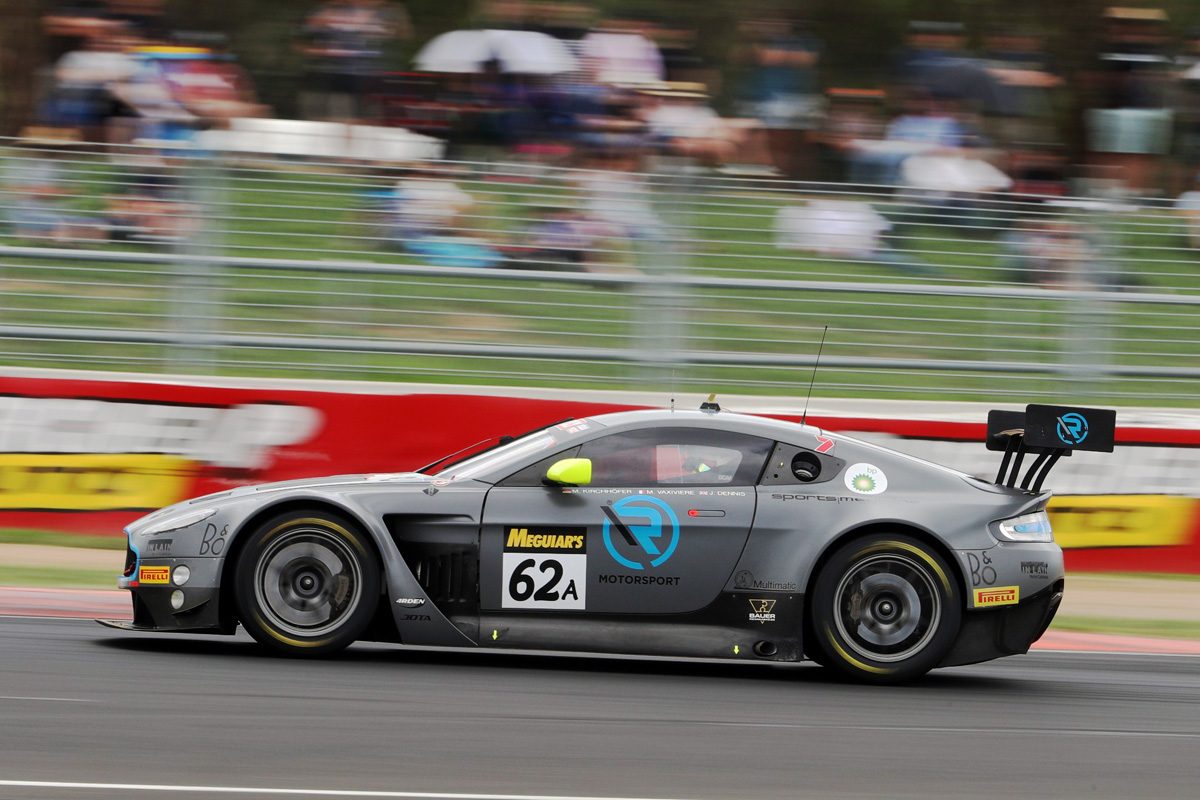 The #62 Aston Martin will be last out in this afternoon’s Top 10 Shootout while Triple Eight was only 19th in a thrilling qualifying session for the Bathurst 12 Hour.

Jake Dennis set the pace with a 2:02.4127s after the chequered flag had been unfurled at the end of the second, 30-minute qualifying session, but the Pro class R-Motorsport entry has a two-position grid penalty against its name for pit lane speeding.

Yelmer Buurman looked to have secured provisional pole when he wheeled the Team 19/Black Falcon Mercedes-AMG to a 2:02.4726s in the 23rd minute, which remained fastest when the clock had counted down to zero.

However, Car #19 ended up only fourth, behind the #62 R-Motorsport Vantage, David Reynolds in the #777 Bend Motorsport Park Mercedes-AMG, and Maro Engel in the sister #77 Craft Bamboo/Black Falcon Mercedes-AMG.

Dennis had also been the quickest driver in the 45-minute first qualifying session with a low-2:03, and was first into the 2:02s immediately in Qualifying 2 for Class A cars only.

The 23-year-old Brit was bundled down to eighth with five minutes remaining, having been baulked while on a personal best lap when the sister #760 Vantage crawled through The Chase after hitting the wall on top of the mountain, but stood up when it counted.

Reynolds efforts means that the Erebus/Scott Taylor Motorsport entry is best of the Pro-Am subclass having moved up from sixth with a time just 0.0122s slower than Dennis’ hot lap, moments later.

Former Erebus Supercars driver Engel looked fairly safe in the top 10 for most of the session, but made sure when he broke the beam even later than Reynolds with an effort just 0.0057s slower again.

Campbell in fact only completed three laps but was safely into the shootout in fifth position, from the #107 Bentley Team M-Sport Continental piloted by Steven Kane.

Ironically, Kane’s move into the top 10 inside the final two minutes, which came despite pinching the left-front under brakes at The Chase, knocked the #108 Continental of Vincent Abril out and the Frenchman finished up 11th.

Following #107 were the two Audi Sport Team Valvoline cars of Kelvin van der Linde in the #22 R8 and Christopher Haase in the #2 R8, respectively.

As he was in Practice 5, Haase had been the initial pace-setter with a 2:02.8120 but could only find less than a tenth more for the rest of the session.

Raffaele Marciello in the GruppeM Mercedes-AMG and Alexandre Imperatori in the #18 KCMG Nissan GT-R rounded out the top 10.

Last year’s pole-sitter Chaz Mostert languished in 15th in the BMW Team Schnitzer entry, one position behind Nick Catsburg in the other M6 out of Walkenhorst Motorsport.

Jamie Whincup ragged the Team Vodafone Mercedes-AMG but still only got to 19th-fastest of the 26 remaining GT3s in the field, 1.0368s off the pace and therefore also a full second off the #777 car also out of the STM stable.

His afternoon was still better than Matthew Parry’s after the Welshman hit the wall at McPhillamy Park in the Pro-Am R-Motorsport entry, which he qualified 17th on the grid.

Earlier, in the session open to all cars, Ben Barker completed only three laps in putting the #4 Grove Racing Porsche 911 GT3 Cup Car on pole in Class B with a 2:06.4520s.

His efforts mean either himself, Stephen Grove, or Brenton Grove, will start the race from 26th outright.

Anton De Pasquale in the #91 MARC II Car was fastest in Class I, and also faster than those in Classes B and C, and one of the GT3s, across the two qualifying sessions, even after discounting the two laps he set which breached the car’s 2:05s benchmark.

However, he also incurred a two-position grid penalty for pit lane speeding which is expected to see him drop to 27th on the grid.

The grid for the 2019 Liqui-Moly Bathurst 12 Hour will be finalised with the Pirelli Top 10 Shootout from 1640 local time/AEDT.

Provisional grid to be published when available

Results: Qualifying 2 (Class A only)