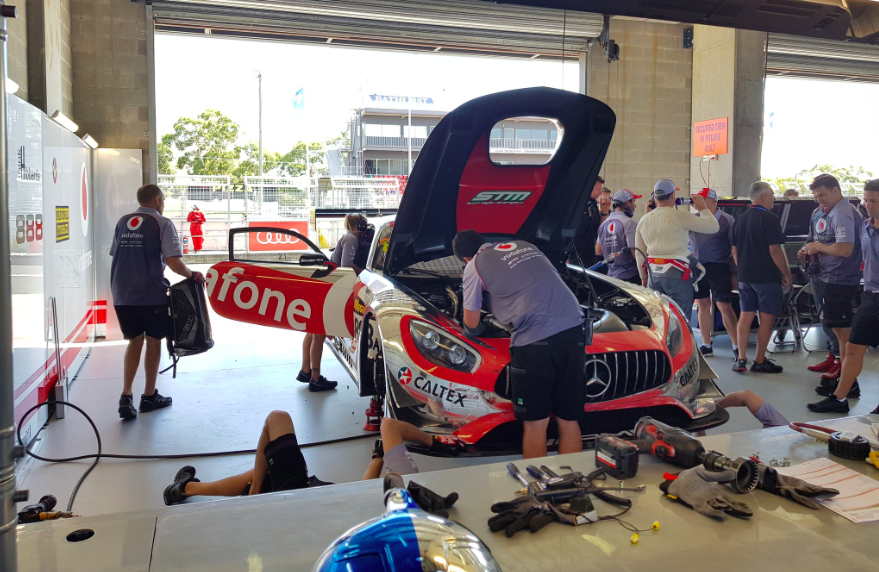 Shane van Gisbergen says there was nothing he could do to avoid contact that sparked a heavy impact for the Spirit of Race Ferrari in Bathurst 12 Hour Practice 2.

The #888 Team Vodafone Mercedes AMG GT3, with van Gisbergen at the wheel, touched the rear of the Paul Dalla Lana piloted Ferrari 488 GT3 on the run to Murray’s.

As a result, the Ferrari, that topped opening practice, fired into wall on the driver’s right with the impact causing significant damage to the front of the car.

Van Gisbergen briefly stopped the Triple Eight Mercedes on track to check on the driver before returning the car to the pits under red flag conditions with damage to the front splitter.

Van Gisbergen confirmed that he tried to give Am driver Dalla Lana room before the impact.

“I obviously caught him and I knew it was an Am guy learning the circuit, so I tried to give him space all the lap, and he obviously hadn’t seen me, which is fine, as he was doing his best to hang on and learn the track I guess,” said van Gisbergen when asked by Speedcafe.com.

“Then out of The Chase, I went to the inside on the exit and he came across on the racing line for the last corner and I thought ‘ok he hasn’t seen me’ so I crossed to the inside and he has seen me and just braked at completely the wrong time and I just could’t avoid him.

“I was trying to give space, be patient as it is first practice unfortunately it damaged two cars.

“The car is fine but unfortunately his car has a bit of damage but I couldn’t do anything to avoid him so it is a bit of a shame.”

The Triple Eight car remained in the garage for the rest of a crash strewn Practice 2 that was red flag early on when the Black Swan Racing Porsche backed into the wall hard on the exit of The Chase.

Driver Tim Pappas was set to be transported to hospital for a precautionary checks after being transferred to the circuit’s medical centre in a conscious state.

It is unclear if the Black Swan Racing will be able to continue.

Meanwhile, Speedcafe.com understands that the Spirit of Race squad is attempting to fix its damaged Ferrari.