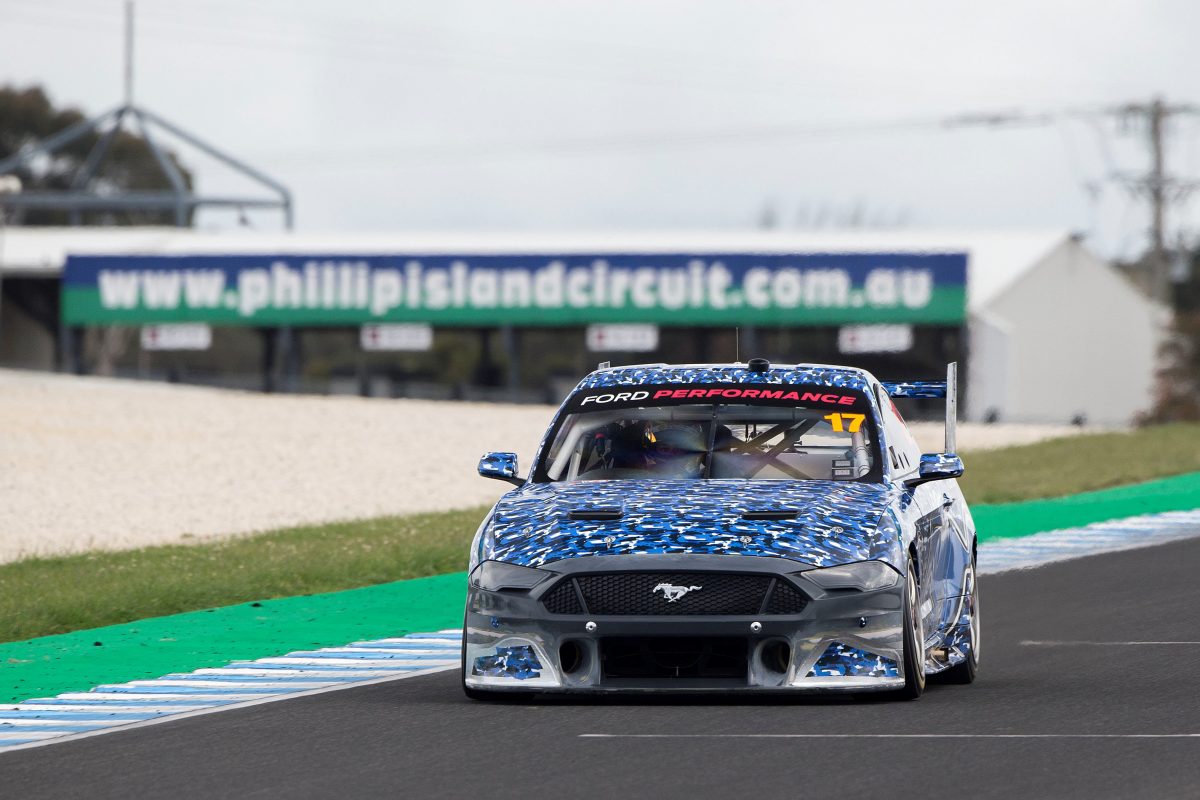 Ford hero John Bowe has given qualified approval of the look of the new Mustang Supercar despite it being widely criticised in its camouflage livery.

The Supercar version of Ford’s hero car has necessarily taken on a different shape to the roadgoing variant in order to fit the championship’s control chassis specifications.

Those requirements include a far more pronounced roofline in order to clear the roll hoop, a feature which has come in for particular criticism.

However, the Mustang has only been seen in its camouflage livery in the public domain, and Ford competitors such as Tickford Racing driver Cameron Waters and 23Red Racing team owner Phil Munday believe that the car will be far more pleasing on the eye in race liveries.

It is a view also shared by Bowe.

“I think the keyboard warriors have been a bit hard on it, (but) it hasn’t had any livery on it, it’s had a disguise; there’s a reason that car manufacturers disguise their cars around in testing.

“I was involved in all that stuff with Ford quite a while ago, and it’s because you can’t tell what they look like; that’s why they do it.

“I think it’ll look pretty good. It’s not ideal, I suppose, that it’s a bit taller in the roofline but I don’t think anybody will take much notice of it.”

Ford teams raced the FGX Falcon from the start of 2015 until the end of the past season, even though the road car went out of production with the closure of local manufacturing in October 2016.

Bowe believes that the introduction of the Mustang will reinvigorate Blue Oval fans, which he maintains are one of the bedrocks of the Supercars Championship.

“The fact that it’s there, and it’s a current car that you can buy in the showroom – even though we all know there’s no relationship between any of those cars and real (road) cars – it’s just that it’ll give the Ford fans something to love,” he explained.

“Let’s face it, even though we’ve had Nissan and we’ve had Volvo and we’ve had, for a brief moment, a Mercedes, the whole love of Supercars is General Motors and Ford, isn’t it, really?

“I think it’s going to be a good thing for the category because the category needs more enthusiasm from eyeballs so I’m quite looking forward to it.”

He also hopes that the Mustang will give Ford teams a more competitive weapon to fight with given the introduction of the ZB Commodore last year.

The ZB came to be regarded as aerodynamically superior to the FGX Falcon, which Mark Dutton as team manager of factory Holden team Triple Eight put down to better balance.

Bowe furthermore believes that the achievement of his former team, now in its guise as DJR Team Penske, to win the drivers’ championship was therefore all the more meritorious.

“Whether (the Mustang) will make any difference… I assume it’ll be fairly similar in performance to the Holden because they both are, aren’t they?” he pondered.

“I think the Holden last year had better aero performance, in fact I’m sure it did, so Scott McLaughlin and DJR Team Penske, their victory was against the odds, I reckon. I reckon it was a fantastic job.”

Shell V-Power Racing will launch their Mustangs in Melbourne on February 11.