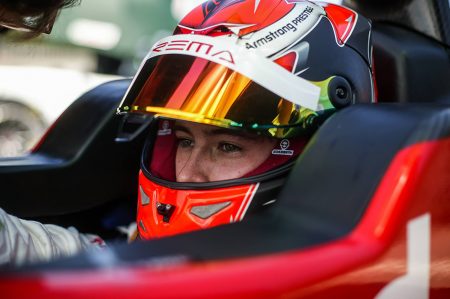 Marcus Armstrong has picked up a second race win of the 2019 Castrol Toyota Racing Series in lights-to-flag fashion at Hampton Downs.

The Christchurch driver qualified on pole with the only sub-one-minute lap time of qualifying and made no mistake when the lights went out.

He left Raoul Hyman behind and the South African immediately came under attack from Liam Lawson, who qualified third, but the New Zealander left himself vulnerable to those behind when he got crossed up trying round up Hyman at Turn 3.

The Safety Car was quickly called when Czech Petr Ptacek lunged at Artem Petrov in the middle of the pack and collected the Russian.

When the race did restart, with 16 laps remaining, Armstrong began to put multiple tenths per lap on the field as Hyman battled to fend off Lawson.

In the end, however, he won it under Safety Car as Brendon Leitch, who was recovering strongly after an early off, shunted Dev Gore.

While the Kiwi made it back to pit lane sans front wing, Gore’s damaged rear wing robbed him of downforce and saw the American spin into the gravel trap at Turn 1, necessitating the yellows.

Lawson remained third, behind Hyman, meaning he cedes the series lead to Armstrong.

“I just pushed the whole way and we were quite fast,” said Armstrong, who is five points clear of M2 Competition team-mate Lawson.

“I was a bit worried at the end when there was a Safety Car with two to three laps to go. I didn’t want a safety car restart with one lap to go.

“In the end we got the win and the points and we go again tomorrow.

“I think we can do the same tomorrow. The car is easy to drive at the moment, its fast and I feel quite comfortable.”

Lucas Auer (Austrian) was the immediate beneficiary of the Ptacek-Petrov clash and ran in fourth thereafter, while Australian Jackson Walls finished fifth thanks in part to an impressive move on Esteban Muth (Belgian).

There was also a race on the Friday, due to the postponement of two races from Round 2 at Teretonga Park a week earlier.

It ended up being a chaotic affair which featured three red flags and even saw the Safety Car pick up a puncture as not quite the 20 scheduled laps were completed.

Leitch jumped from sixth to first amid the drama but the third and final red flag saw the order backdated to leave him third, behind Ptacek.

Lawson, who had spent much of the race running second to Das, was ultimately seventh, one position ahead of Walls despite the latter having a spin earlier on.

Armstrong sat third at the time of the final Safety Car but a post-race time penalty for passing under a Safety Car period saw him put back to 10th, and Smith was 12th after contact with Auer along the way.

Williams was a DNF due to being put into a wall by Kazuto Kotaka.

There will be two more races tomorrow, including the New Zealand Motor Cup.