One of the teaser shots pic: Irwin Racing Twitter 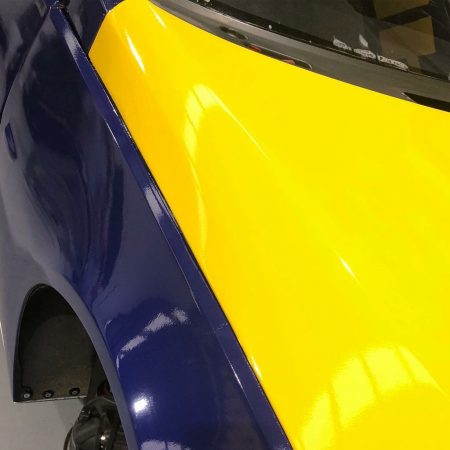 Team 18 has released teaser images of the Irwin Racing livery which will adorn its newly acquired Triple Eight-built ZB Commodore in 2019.

Irwin Tools comes onboard at the single-car team as it embarks on a new era with Mark Winterbottom as driver this year.

The two images which have appeared on the team’s Twitter show the C-pillar, not yet fully wrapped, and what appears to be a front guard.

As per previous Irwin liveries at Britek Motorsport and Stone Brothers Racing (and subsequently Erebus Motorsport), the livery appears to be predominantly a dark shade of blue with yellow trim.

The bonnet, however, may feature more yellow than in past Irwin Racing incarnations.

Team 18 will enjoy a closer relationship with Triple Eight Race Engineering this year as a full customer, with Winterbottom describing his first visit to Triple Eight’s Banyo workshop as ‘surreal’.

It has bought the prototype ZB Commodore used for homologation testing and one race meeting by Jamie Whincup last year, while its old car has gone the other way to be used by Triple Eight as a spare.

The #18 Virgin Australia Supercars Championship entry will be officially unveiled on February 7.

Take a look inside our Garage for a sneak peak of our Livery 👀#IRWINRacing #VASC pic.twitter.com/hxrPWU6Ouv