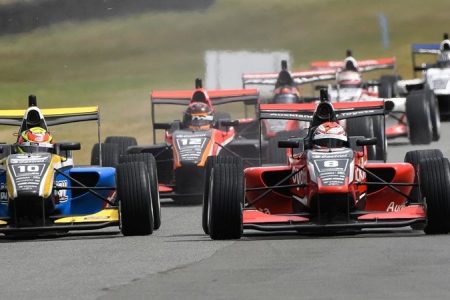 Marcus Armstrong with Liam Lawson on his outside pic: Toyota Racing New Zealand

Marcus Armstrong has held off a committed Liam Lawson to win Race 1 in Round 2 of the Castrol Toyota Racing Series at Teretonga Park.

Lawson regained one position after a bad start but was denied a third race win of the campaign by his M2 Competition team-mate, while Russian Artem Petrov finished third after late drama.

New Zealanders locked out the front row but Lawson broke into wheelspin when the lights went out and fell behind Armstrong and Petrov, who leapt all the way from eighth on the grid.

For the second time in seven days, Lawson pulled off a huge outside move when he rounded up Petrov at Turn 1 on an even wetter track than at Highlands Motorsport Park.

Armstrong was already three seconds to the good at the time, the start of Lap 3, but Lawson began to make up the margin.

He was given some assistance on Lap 12 when Romanian Petru Florescu ran off at Turn 2 and got beached, drawing a Safety Car.

Lawson applied major pressure in the three laps which remained after the restart but nearly came unstuck multiple times in doing so.

He also kept Petrov in the hunt but the top three ultimately remained unchanged, despite the best efforts of Raoul Hyman.

The South African divebombed Petrov at the last corner but ran onto the grass and took the chequered flag in 11th, where he had started after qualifying on older tyres.

Armstrong and Lawson are now tied at the top of the standings ahead of Races 2 and 3 tomorrow in Invercargill.