Toby Price still a minute up with one stage remaining

Toby Price still a minute up with one stage remaining 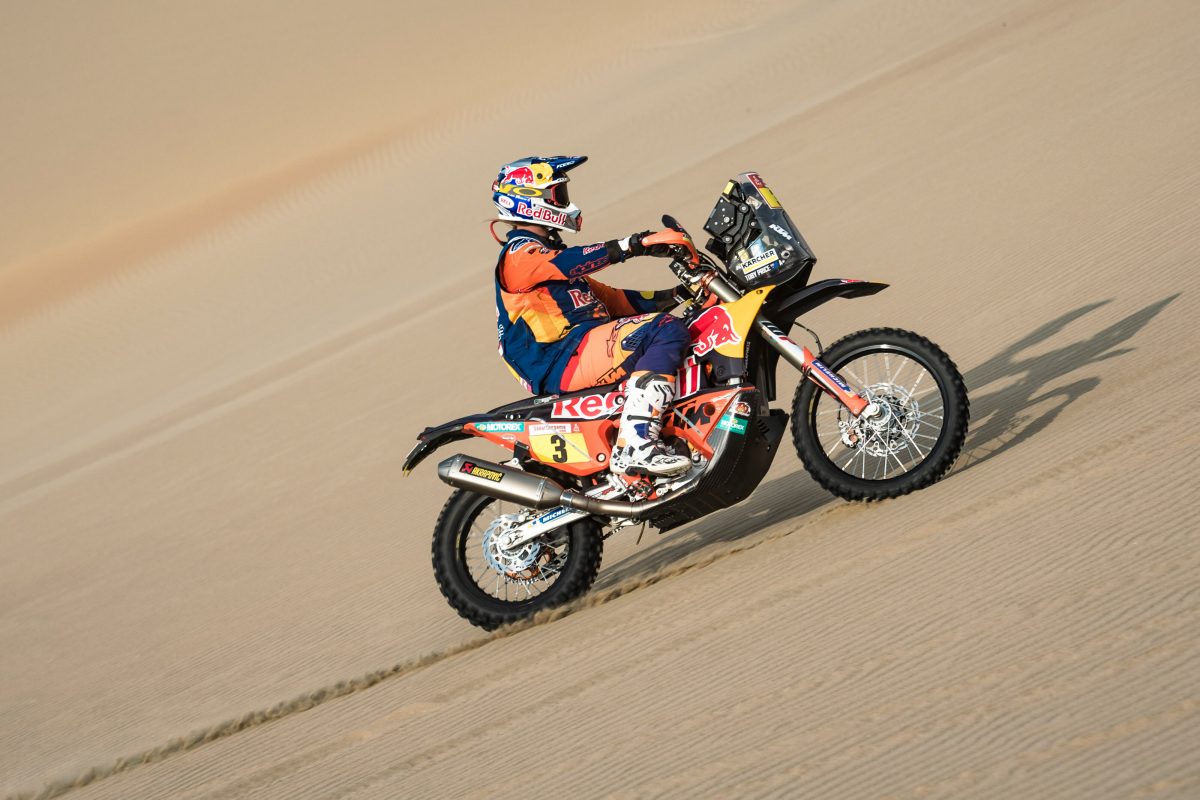 Toby Price will take a lead of just over a minute in the final stage of the 2019 Dakar Rally after all but matching his nearest rival on Stage 9.

As such, the Australian heads the general classification by 1:02s over Quintanilla, while 2018 champion Walkner remains 6:35s back and more than half an hour ahead of fourth position.

Those three set out together as part of a mass start, and the lead group of 10 of which they were a part made a tentative opening to the stage.

Eventually they began to push, as first Sam Sunderland (British) and then Kevin Benavides moved into the stage lead, but the gaps remained small.

With none of the front-runners willing to try and seriously break away, their splits were often beaten as riders from the second group which started five minutes later arrived at waypoints.

In the end it was indeed Michael Metge who came from that second group to win a Dakar stage for the first time on his factory Sherco.

“I’m so happy for the team because we did a very good job this year,” said the Frenchman.

“The bike works very well and I’m so happy because they pushed a lot, also so happy for all the people who follow me, my sons and my wife. I dedicate this victory to them.”

Quintanilla was third-fastest on the day, 3:28s off the pace in a bunch of four including the three contenders and Jose Ignacio Cornejo Florimo (Honda, Chilean) that was covered by two seconds.

“Today was a mass start, so there was no chance to make a difference,” said Quintanilla.

“I want to congratulate my friend Nacho Cornejo (Jose Ignacio), who did a really good job, for all the hard work with the difficult navigation.

“It was difficult to navigate between valleys and dunes, but I’m happy to finish one more day and one more stage to go.

“The race is really tight with Toby. It’s been a really hard race, but I’m happy at the moment with the result and my performance, but for sure tomorrow I’ll give it my 100 percent to win the race.”

Sunderland and van Beveren had finished the preceding stage within 10 minutes of the general classification lead but suffered serious setbacks thereafter.

The former, who won the Dakar for KTM in 2017, was hit with a one-hour penalty before the stage started for altering his Iritrack GPS system and is now eighth overall.

Van Beveren’s fate was cruel as his Yamaha suffered an engine problem with 16 kilometres to go, having been a second off the lead at the last waypoint before the finish.

The Frenchman did manage to make the finish some three-and-a-half hours later and fell to 14th in class.

Update: van Beveren was subsequently excluded and is out of the event.

Kevin Benavides (Honda, Argentinean), who was just over 20 minutes behind Price after Stage 8, was slapped with a three-hour penalty for carrying additional notes

One stage remains in the 41st Dakar Rally, with the field set to return to Lima on a relatively short 112km special stage (plus 247km liaison) early tomorrow morning (AEDT).