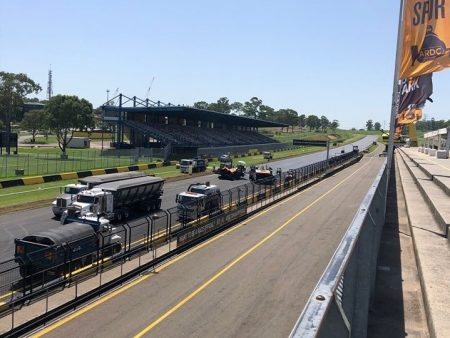 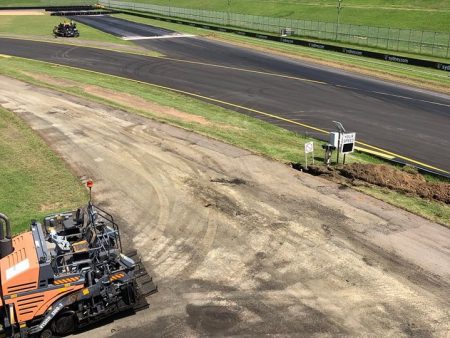 Pit exit during the project

Track activity will resume tomorrow at Sydney Motorsport Park after resurfacing of the circuit’s main straight and pit exit.

Brabham Straight has been given a fresh surface which spans the exit of the final corner to the join with last year’s resurfaced section at Moffat Corner (Turn 1), near the 100m marker.

Pit exit has also been relaid from Flagpoint 1 (pit control) to where it meets the circuit proper at the exit of the first corner, and new timing loops installed at the start line and both ends of pit lane.

Significant maintenance is usually scheduled for the new year period given that Sydney Motorsport Park is otherwise booked out for most days of the year, with resurfacing done in stages.

“We have spent close to one million dollars on these track works to maintain our excellent facilities and our FIA Grade 2 licence,” Glenn Matthews, CEO of the Australian Racing Drivers’ Club which operates the circuit, told Speedcafe.com.

“This also shows our continued commitment from the ARDC in our facilities at SMSP.

“This is great news not only for our competitors and track enthusiasts, but also for the tens of thousands of spectators who visit SMSP every year.

“We have spent over $20 million in last seven years to make SMSP the world class venue it is today – and there’s more news to come.”

The work, which began on January 14, sums to 10,800 square metres and comes as a full resurface of Perth’s Barbagallo Wanneroo Raceway nears completion.