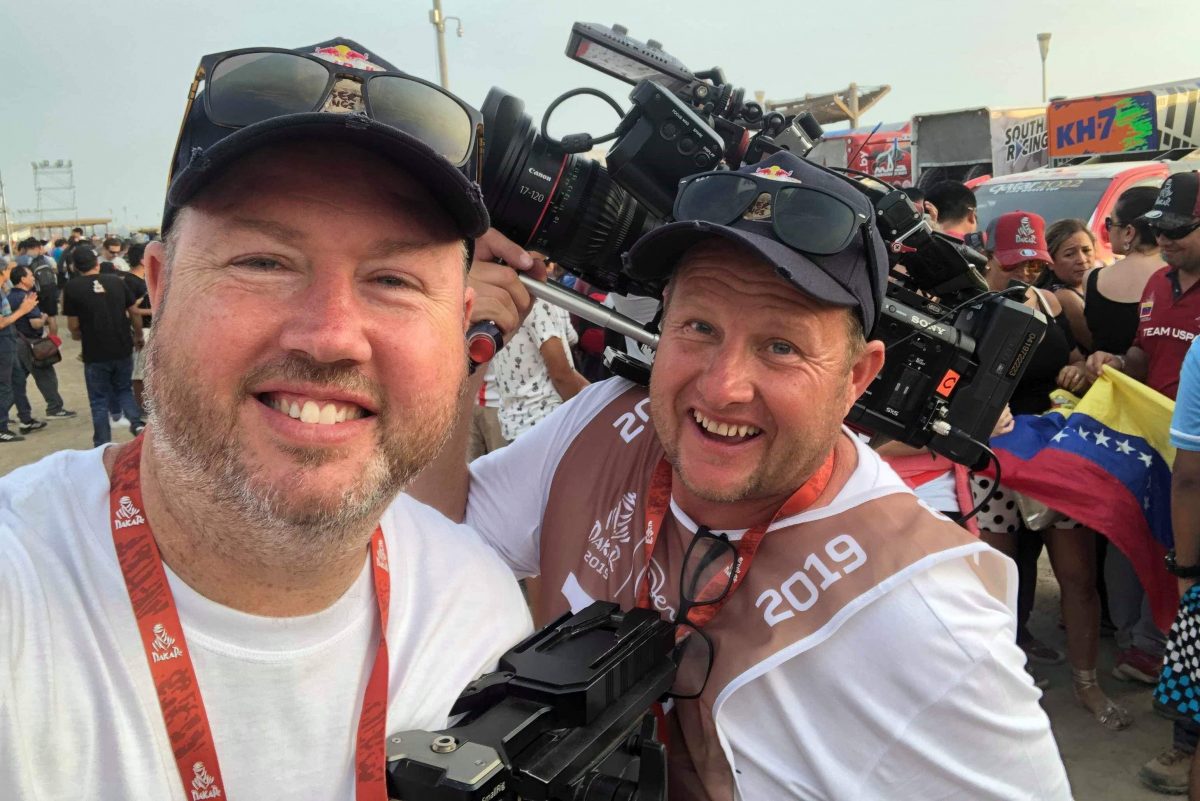 While Toby Price headlines the contingent of Australian competitors at this year’s Dakar Rally in Peru, there are a few other Aussies working hard behind the scenes.

Nathan Prendergast heads up Supercars’ television division but for the past three years has spent his off-season producing content from one of the world’s logistically toughest events.

He is currently the Executive Producer of Dakar Daily which is commissioned by Red Bull International and provides highlights and behind the scenes pieces from the event each day.

Running on just a few hours sleep a night, Speedcafe.com managed to catch up with this homegrown talent for a quick Cafe Chat.

SPEEDCAFE: What is your role at Dakar?

NATHAN PRENDERGAST: I’m the executive producer of a show called Dakar Daily. It’s commissioned by Red Bull International and we cover the event and deliver highlights, feature stories and other behind the scenes stories every day from on the road. This year with the preview show and rest day show, that’s 12 episodes. We are limited to 16 minutes per day, but we are often under the pump as the show is fed out at 1730 local time and many stages don’t finish until just before then. It keeps us on our toes.

SPEEDCAFE: How many Dakars have you done?

PRENDERGAST: This is my third Dakar; I have been to Paraguay, Argentina, Bolivia, and Peru. The 2017 event (first) was particularly gruelling with 49 degrees (Celsius) on Day 1 and then three degrees and knee-deep mud at 3800m on Day 3. The whole time we worked out of a tent.

SPEEDCAFE: How many other Australians are with you?

PRENDERGAST: My crew is made up of four Aussies: myself; Peter McDonald, who is my pit lane RF cameraman from Supercars and who has done all three with me; Richard Rowley, a brilliant cameraman from Sydney; and Andrew Mell, who worked for Neil Crompton at Airtime for a couple of years. The others are two are British hosts, a British editor who worked in WRC, and a driver/producer called Uri from Argentina.

SPEEDCAFE: What are some of the logistical issues attached to an event like Dakar?

PRENDERGAST: The key to Dakar is sleep management. Given the large distances you cover, most of the travel is overnight in buses or very early in the morning on military planes. You need to be able to sleep when the buses go and thankfully they are very comfortable.

Distance is a big issue because in order for us to deliver unique content from outside the bivouac our team needs to get up very early and get ahead of the rally to shoot a feature and then get the media back to the bivouac before the show goes to air. Some days it’s not possible and the story will run the following day, however Peru offers great opportunity for us to deliver more of this content with several loop stages, allowing us to stay setup in the bivouac and the crew to go out and return easier than going stage by stage.

The final issue is time. As mentioned, we have a narrow window to make each day’s show and we can’t finish the show until we have the results of at least the cars and bikes. Some days we literally run into the satellite truck with the laptop to play the show out just as our window opens. It can be stressful but rewarding.

SPEEDCAFE: What is your history in the business?

PRENDERGAST: I have been around motorsport my entire life. My parents owned and operated a drag strip in Perth for many years and my father was asked to run Eastern Creek Raceway (now Sydney Motorsport Park) when it was built. That brought me to Sydney.

From there, I was involved in all facets of motorsport and got to meet some people inside TV circles. I was a track announcer for drag racing and at 15 started doing stuff with (production company) AVE on TV both as presenter and commentator. That eventually lead to a full-time role at Speedweek where I lasted 10 years.

I then setup Ignition Productions in 2005 (which continues today) and started to work for Supercars not long after that. I went from junior audio to pit producer to director in a couple of years and then was offered the head of TV gig at the end of 2017.

SPEEDCAFE: What has been your father Kevin’s influence on your career?

PRENDERGAST: As mentioned, my father was and still is heavily involved in motorsport. A former owner of a venue in Perth, he has run Eastern Creek Raceway, Phillip Island, Taupo and the Motorplex in Perth. Recently he has worked with me on my Aus-X Open projects and is also negotiating some contractual work inside the motorsport industry. My father has been a big influence on my professional life.

SPEEDCAFE: What has been the highlight of your career?

PRENDERGAST: It’s a difficult question to answer as I’ve been lucky enough to be involved in some big productions. I’ve directed Melbourne Cups, Australian Open Tennis finals, Sydney to Hobart races, AFL Grand Final pre-event and of course Supercars. I have to say the 2014 Bathurst race holds a special place in my memory and I doubt we will see such an incredible day of racing and controversy ever again. Last Year’s Dakar was also a highlight as we delivered some incredible TV and had a good time doing it.

SPEEDCAFE: What is your overview on the 2018 Supercars season from a TV sense?

PRENDERGAST: I’m very pleased with the 2018 season. I feel we has some solid results and had some major victories in the way we present the sport. I feel Sydney Motorsport Park’s night race is a real test bed for delivering a show along with a race. The incredible TV ratings from Newcastle gives me faith that if we deliver the product well, then people will watch. We have some challenges ahead as all sports do to maintain the eyeballs, but for my first year in the role I’m very happy. 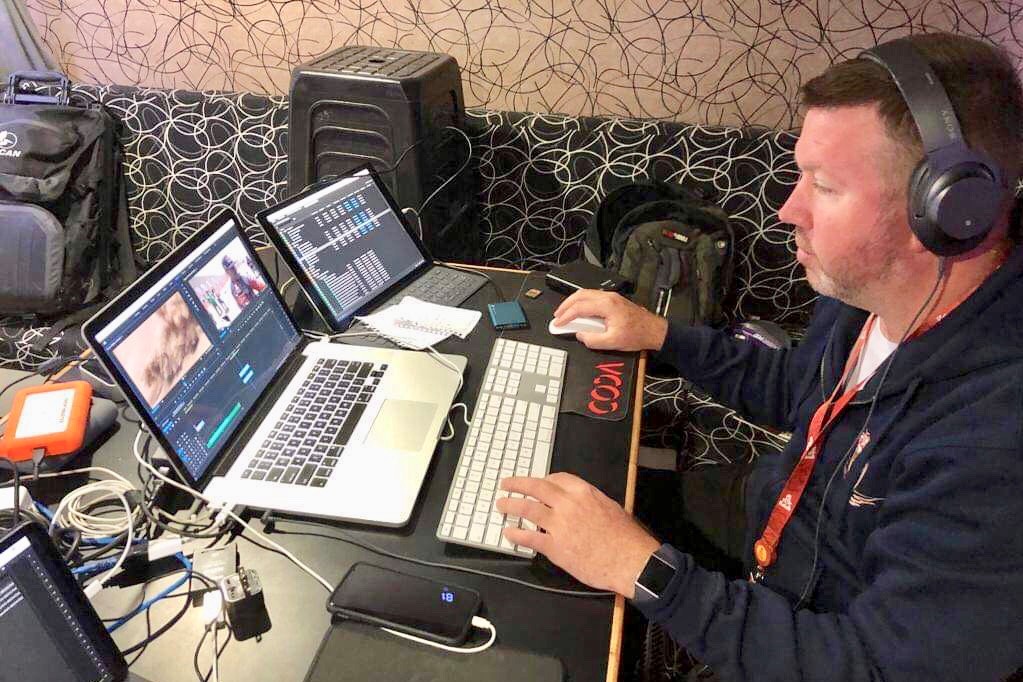 Prendergast at work in Peru