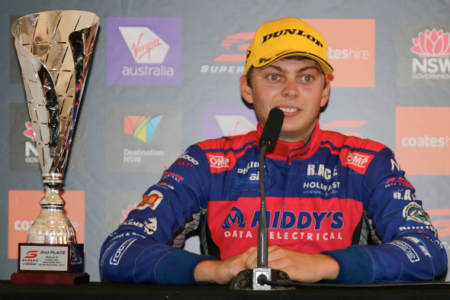 Bryce Fullwood has announced that he will return to MW Motorsport for this year’s Dunlop Super2 Series.

Fullwood joined MWM for the final round of his debut season in 2015 and spent two years there, initially in a Project Blueprint-specification FG Falcon before switching to a Nissan Altima midway through 2017.

The Territorian finished 11th that season after a strong run home which included podiums at Sandown and Newcastle.

His move to Matt Stone Racing and an ex-DJR Team Penske FGX Falcon in 2018 did not pay dividends.

Fullwood took over the 2017 series-winning VF Commodore at Townsville before that car was recalled for Hazelwood to use in the Virgin Australia Supercars Championship as MSR struggled with its step into the top tier.

Having ended the year 17th in the standings after reverting to the spare VF, the 20-year-old been in talks about the possibility of staying with the Queensland team but has now announced on social media that he will be back at MWM in 2019.

He is the first confirmed driver at MWM, which fielded Garry Jacobson, Alex Rullo, and Dean Fiore last year.

Jacobson is believed to be in the frame for a rise to Nissan Motorsport, a seat which Rullo had also been linked with before declaring himself likely to stay in Super.

Fiore has told Speedcafe.com that he is worked on a deal to remain at MWM.