It also marked its final championship, with the locally built saloon having gone out of production and set to be replaced with the Mustang on the grid for this year’s Virgin Australia Supercars Championship.

The Ford Falcon made its debut in Australian touring car racing in the 1960s, taking its first Bathurst victory with Harry Firth and Fred Gibson in 1967.

It fell out of favour in the early years of the Australian Touring Car Championship and was sidelined during the Group A era before returning at the end of 1992.

Now, unlike then, there looks to be no hope of a resurrection of the famous nameplate, with the covers to be taken off the Mustangs which will race in 2019 next month.

Having asked the legends who drove them for their own memories, we want to know what is your favourite Falcon touring car in this week’s PIRTEK POLL.

Note: In the interests of brevity, similar models are combined.

The Falcon debuted in Australian touring car racing when JD Sherman finished 10th in the sole race of 1961 at the Lowood Airfield Circuit.

It was the following year when the nameplate made its mark on Australian motorsport, however, as Firth and Bob Jane won the 1962 Armstrong 500 at Phillip Island. 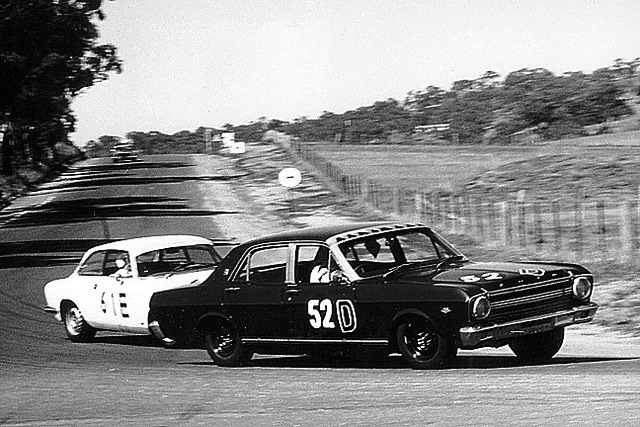 The Falcon’s first Bathurst enduro came in 1967, and the Ford Motor Company achieved a one-two with XR Falcons.

For the outright winners Firth and Gibson, theirs was an even more special place in history given that the victory was also the first for a V8 at Mount Panorama. 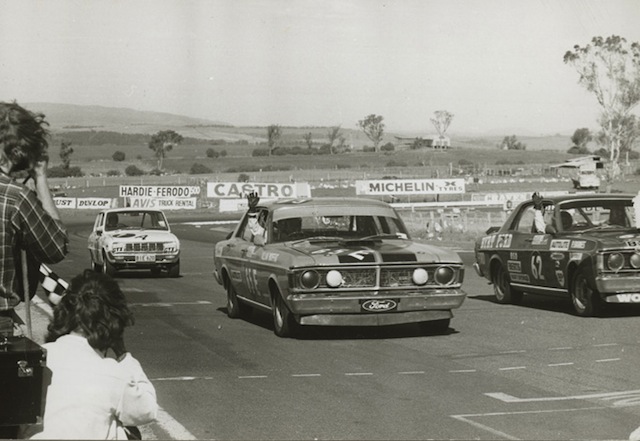 Moffat taking the flag at Bathurst in 1971

It was one of the most iconic cars on the Mountain as the calendars rolled into the 1970s, winning twice with the XW Phase II and then again with the XY Phase III the following year.

The latter was a car that revolutionised the sport, sparking the ‘Supercar scare’ as manufacturers built cars specifically designed to meet homologation criteria with the sole purpose of conquering Bathurst.

In 1970 and 1971 it was Allan Moffat who flew the flag, ending Holden’s two year run with the Monaro, and becoming the first man to win the Great Race at an average speed of more than 130km/h in the process. 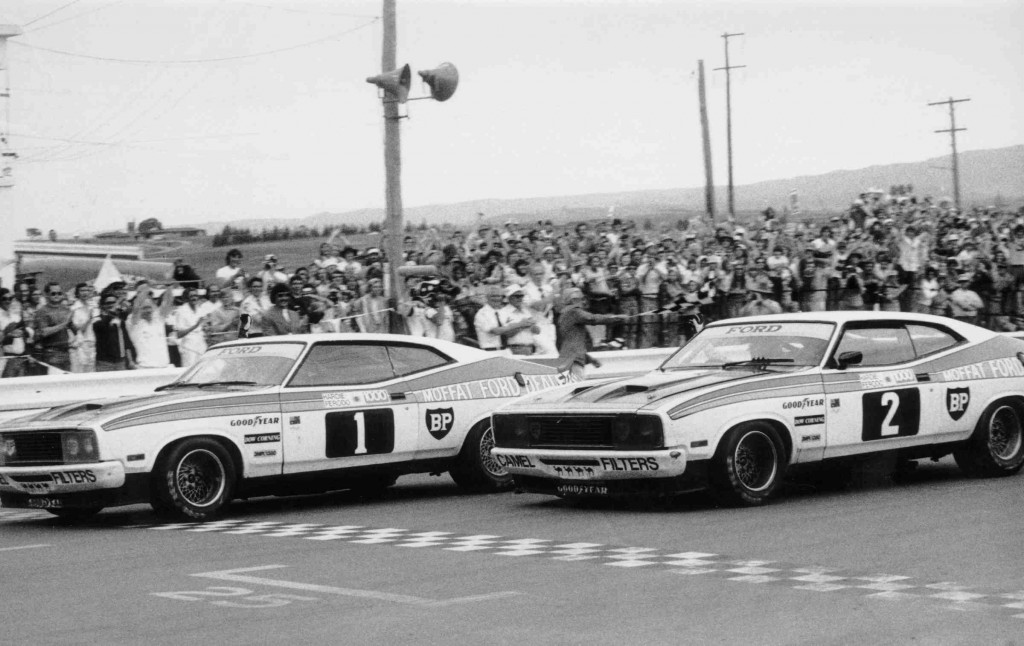 They paint one of the most iconic images of Australian motor racing, Allan Moffat and Colin Bond driving door to door as they dominated the 1977 Bathurst 1000.

The two-door Falcon was singled out by Fred Gibson as the definitive Falcon, which first appeared at Bathurst in 1973 with Moffat and Ian Geoghegan before John Goss and Kevin Bartlett won in a privately entered example the following year, eventually reaching its zenith in 1977.

Moffat also took the honours in that year’s Australian Touring Car Championship, a campaign during which he raced both the Falcon XC and its predecessor. 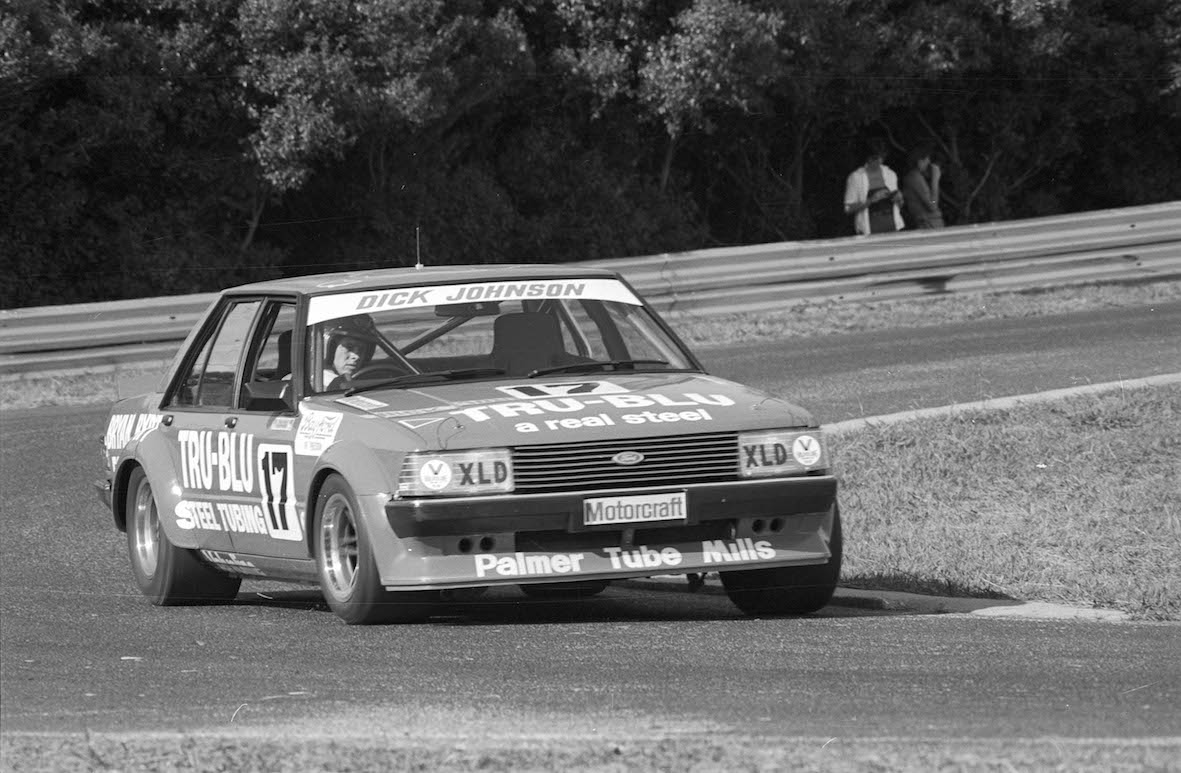 A topical model in the last 18 months due to its introduction to the Paynter Dixon Touring Car Masters series, the XD Falcon lives long in the memories of Ford fans in its guise as the Dick Johnson Tru-Blu car.

Johnson claimed three championships in XDs or XEs from 1981 to 1984, but his most popular achievement from that period is probably the win in the shortened 1981 Bathurst 1000 after the track was blocked at McPhillamy Park. 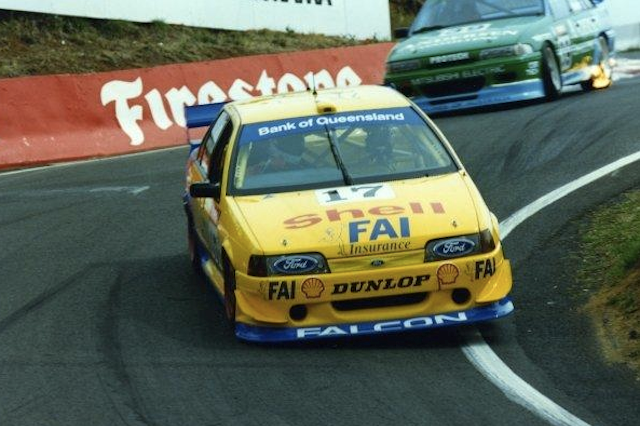 Ending a decade long hiatus from the upper echelon of Australian Motorsport, in 1993 the revised ATCC welcomed back the Ford Falcon.

In the hands of Dick Johnson and John Bowe, Glenn Seton, and Alan Jones it proved competitive under the Group 3A regulations, taking seven of nine rounds throughout its debut season.

Seton swept to the championship ahead of Jones and Bowe, making for a Ford one-two-three, but it was not until 1994 that the EB would taste Bathurst glory. 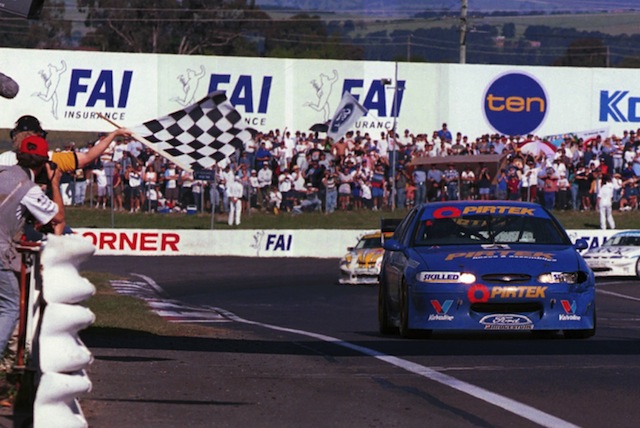 The 1995 ATCC saw the arrival of the EF Falcon, which won eight of the 10 championship rounds in an even split between the ultimately victorious John Bowe and Glenn Seton.

The latter’s 1997 crown, in an EL, remains the last for a single-car team.

Similarly memorable was an against-the-odds Bathurst 1000 win for Jason Bright and Steven Richards in 1998 after a Friday morning practice crash, in the Stone Brothers’ first year as their own race team. There is unlikely to be much love for the AU Falcon, which was Ford’s main fighter from 1999 to 2002.

While the XR6 and XR8 variants, including the V8 Supercars, were more attractive than the non-performance road cars, results on the race track were extremely thin on the ground.

The aerodynamically-challenged AU won no championships, fell wholly within Holden’s record run of seven consecutive Bathurst 1000 wins, and has only two somewhat fortuitous Queensland 500s to its name as major race wins.

It is, however, perhaps the prettiest in championship history when adorned in the Craig Lowndes-00 Motorsport ‘green-eyed monster’ livery of late 2001 through 2002. 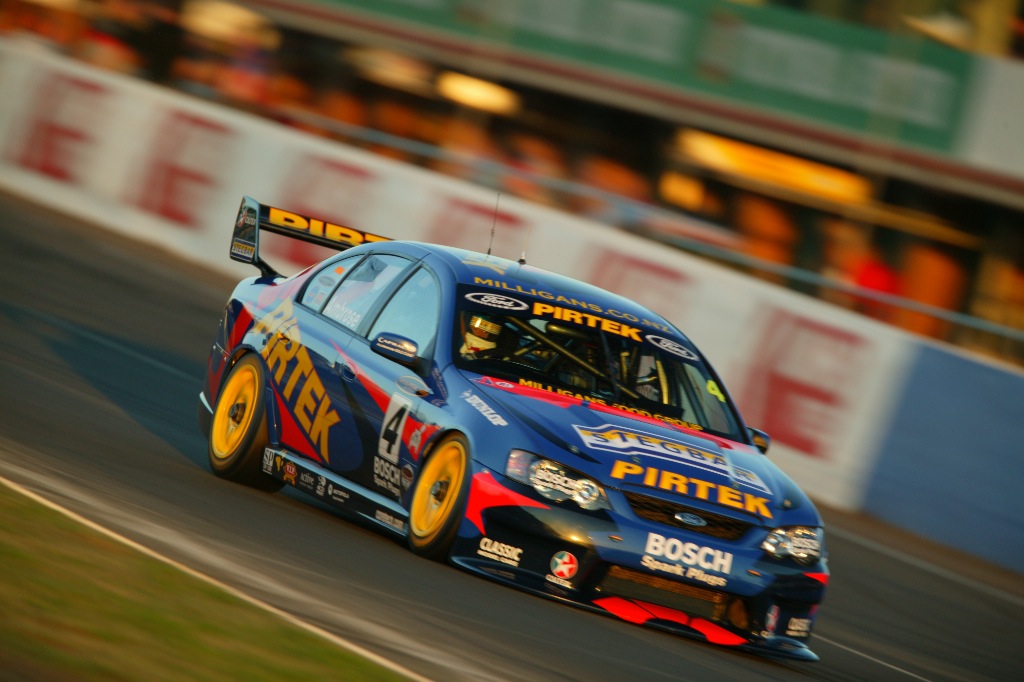 Marcos Ambrose in the BA at Eastern Creek in 2003

The BA Falcon, on the other hand, was manna from heaven for Ford fans as Marcos Ambrose claimed back-to-back championships in 2003 and 2004 before Russell Ingall made it three in a row for Stone Brothers Racing.

Craig Lowndes and Jamie Whincup put Ford back on top at Mount Panorama in 2006, backed up in a BF in 2007 as Falcons swept the podium, and the pulled off the three-peat. 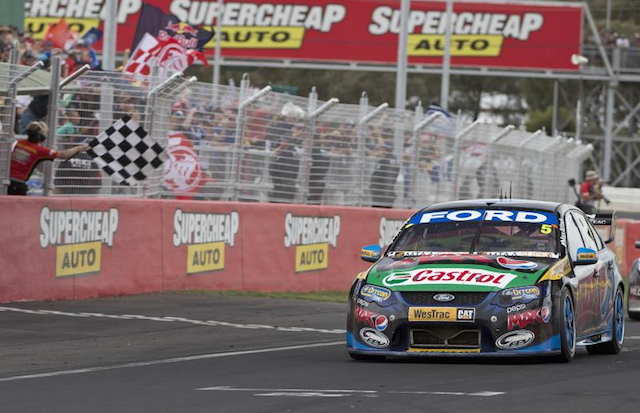 The FG shape has the distinction of having been raced in two distinct specifications, namely the final four years of the Project Blueprint era to the end of 2012 and the start of the Car of the Future era.

In its former guise, the car was taken to championships in 2009 and 2010, although the first done by Jamie Whincup with a ‘Hogster’ badge in place of the Blue Oval due to Ford’s withdrawal of support for Triple Eight Race Engineering.

The second was a memorable victory for James Courtney and the battling Dick Johnson Racing after an extraordinary weekend at Sydney Olympic Park.

Ford Performance Racing and three drivers won the Supercheap Auto Bathurst for the first time in two unbelievable finishes in 2013 and 2014, in FG Falcons. 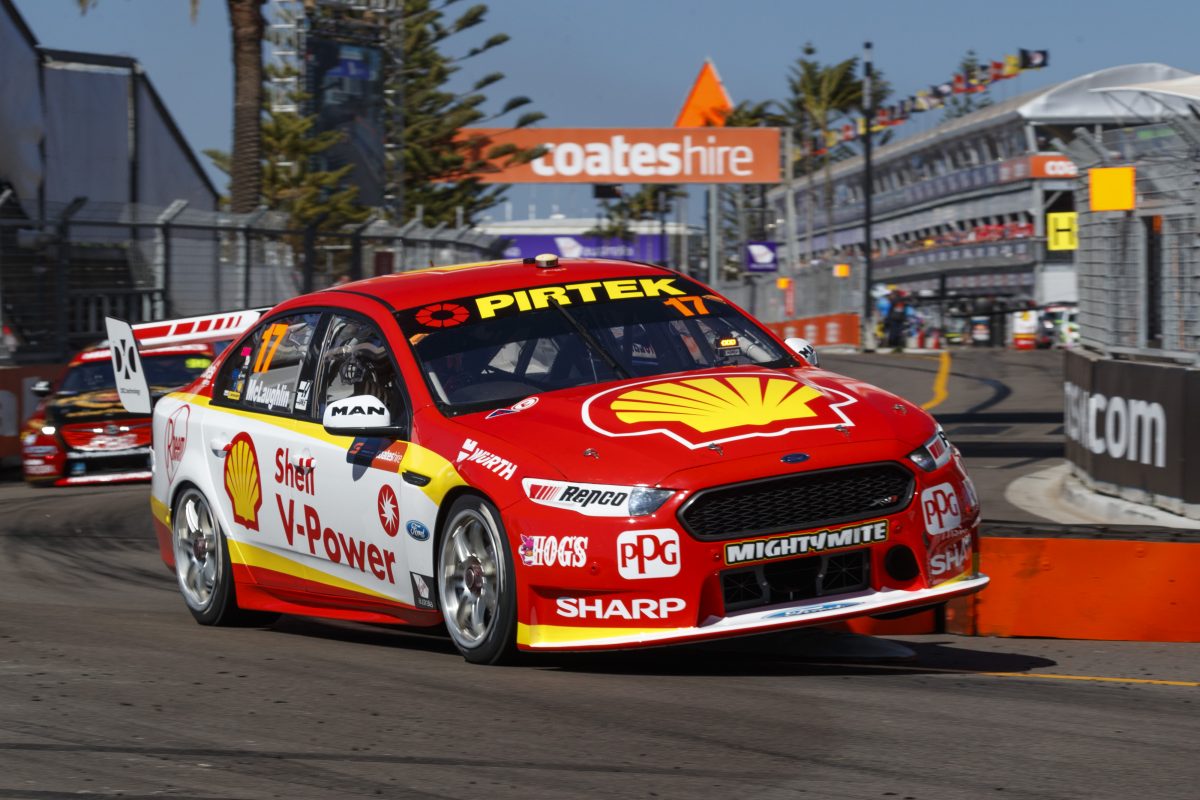 Scott McLaughlin on his way to winning the championship in Newcastle

The last of the Falcons, the FGX was an evolution from the COTF-spec FG and phased in during the early part of 2015.

Designed to cure the rear end instability of the FG, Mark Winterbottom won the championship in the FGX’s first year, his and Tickford Racing’s first.

After a heartbreaking near miss in 2017, McLaughlin coincidentally pulled off championship number 17 for the Falcon with the #17 made famous by Dick Johnson in Newcastle last November.

With championships and wins at major races like the Sandown 500, the one omission from the FGX’s resume is a Bathurst 1000 win.

What is your favourite Falcon? Cast your vote in this week’s PIRTEK POLL.