James Ferguson doing it all by himself at Dakar Rally

James Ferguson doing it all by himself at Dakar Rally 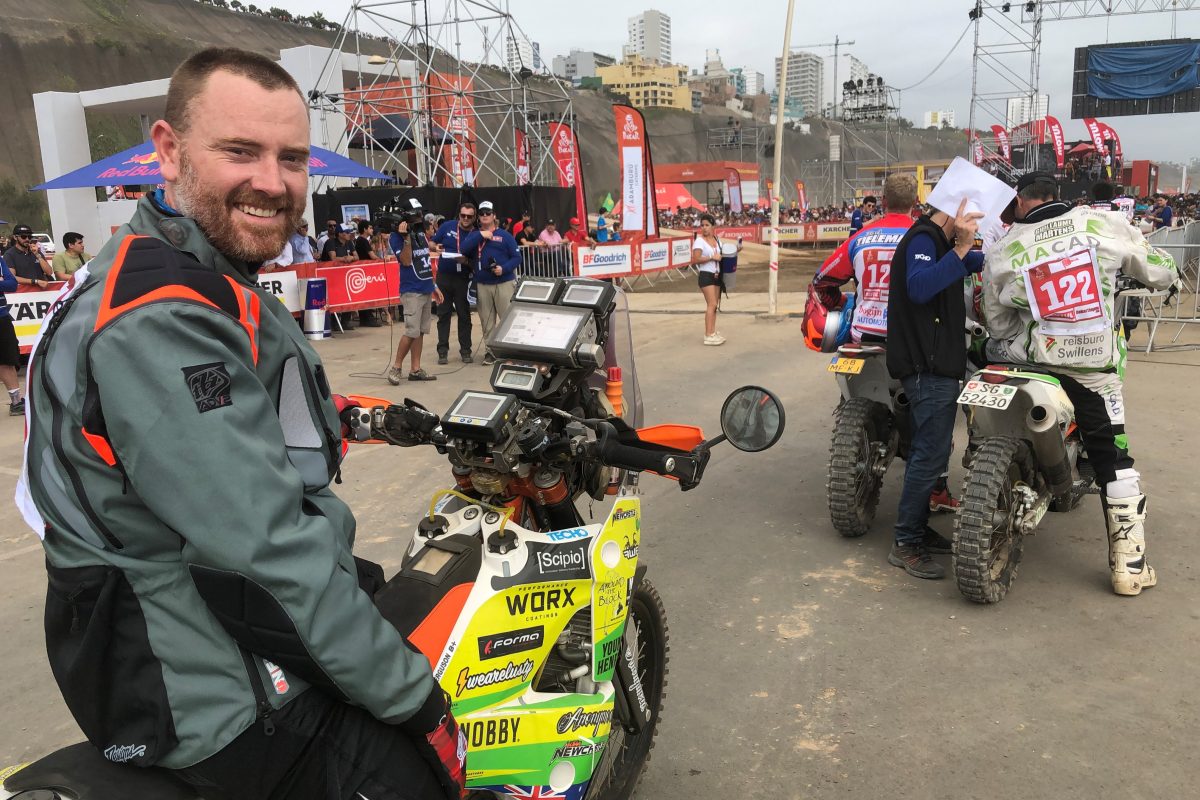 James Ferguson in Lima, where the 2019 Dakar Rally will start

Newcastle’s James Ferguson never dreamed that putting together a personal assault on the Dakar Rally would be anywhere near as tough as it has been, and that’s before turning a wheel in anger.

There was an air of anticipation about what lay ahead of the 33 year-old when he lined up as a rookie amongst some of the world’s best in Lima, Peru pre-race formalities.

He knew a couple of riders around him through other international events he has contested, including the Abu Dhabi Desert Challenge last year, but this was different; this was Dakar.

Both he and his bike looked sharp, but there was a sense of schoolboy nervousness as this talented Novocastrian waited to be introduced to a passionate local crowd in their thousands and to a television audience of millions.

“It has been overwhelming really,” Ferguson told Speedcafe.com as he prepared to make his first appearance on the Dakar introduction podium in Lima.

“It has been a couple of years of solid planning and really taken up everything in the last 12 months.

“I am here by myself and I have been working to at least 11pm every night.

“I am just keen to get out there and get on with it.”

Ferguson is one of seven Australian riders, drivers, or co-drivers in this year’s event which starts early tomorrow morning (AEDT).

Ben Young is a fellow rookie in the bikes section along with 2016 winner and Gold Coast resident Toby Price and the experienced Rodney Faggotter.

Despite a recent wrist fracture, Price is confident of being amongst the front-runners on his Red Bull KTM this year.

John Maragozidis, a three-time Australian Safari winner, also comes to Dakar for the first time on his quad bike after missing what would have been his debut in 2018 because of injury.

Stephen Riley and co-driver Trevor Hanks will also be competing in a unique Holden Commodore ute which they designed on Riley’s dairy farm.

While expectations fall heavily on Price for a big result given his previous performances, the rest of the Australian contingent all have a common thread of a sense of adventure and just a desire to finish one of the world’s toughest events.

Ferguson has pushed the boat out even further by entering the Original by Motul class which means he does the event by himself without assistance.

“I watched the Dakar on TV when I was a kid and always had it in the back of my mind,” he explained.

“My Dad was a biker and I’ve always ridden bikes all my life. I was looking for an adventure and now I want to prove to myself that I can do it.

“The Original by Motul class was the obvious choice. I like to do everything myself.

“To prepare I was able to count on the help of Scott Britnell who rode the Dakar without assistance. He’s a real mentor for me and helped me build my bike and take care of logistics.

“My family has been very supportive. I know it’s hard on my wife, especially with young twins.

“If I finish, it’ll be the last race I do for a while. If I don’t, she’ll have to endure it a little bit more.”

The first of 10 stages takes competitors from Lima to Pisco for the start of a journey of over 5000km, around 70 percent of which will be run on sand.