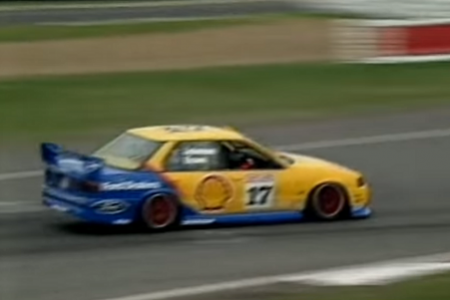 Team Johnson is set to restore the Dick Johnson Racing EB Falcon which crashed out of the 1993 Bathurst 1000 for a return to the race track in 2019.

The team, led by Steven Johnson, will undertake the rebuild of the Ford over summer on behalf of an enthusiast who has recently bought the chassis.

Dick Johnson’s and John Bowe’s Bathurst 1000 campaign of 1993 came to an end when the former was collected by a backmarker at Reid Park and cannoned into the wall.

The chassis was never raced again and has been sitting in the museum at DJR Team Penske’s Stapylton workshop.

“We’re actually finalising details to fully restoring a V8 Touring Car, which is one of Dad’s old EB Falcons from the mid-nineties, back to its former glory and have it racing sometime from mid-next year onwards,” Johnson explained to Speedcafe.com.

“(It’s) A really good customer project for us to do (and) exciting. I think we’ve got the know-how to do it and we’ve got the people to do it.

“That’s going to bring us towards expanding the team a little more and also make sure that we can then start running TCM cars.”

Johnson won’t be racing the EB himself, but could get behind the wheel for a shakedown once the car is brought back to life after a quarter of a century.

It will then run in either the Kumho Tyre Super3 Series or the national Heritage Touring Cars series next year with the owner behind the wheel.

“There is a Heritage Touring Cars series and I think it’s more so for that, which are all the period correct cars,” Johnson explained. 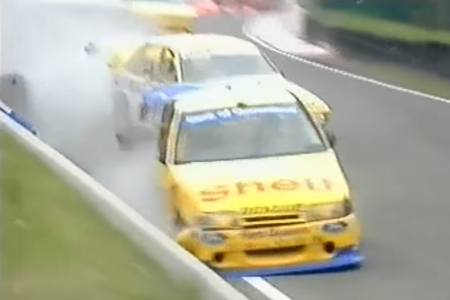 “The car we are restoring now is the car that got crashed in 1993 at Bathurst at Reid Park by Dad when he got hit by a guy by the name of Bill O’Brien in a Commodore and pretty much written off.

“That car, as a shell, was given to the TAFE repair crew as a project over a 12- to 18-month period to repair and to learn about how to fix cars.

“Many have heard that body shell is back; it’s now sitting at DJR Team Penske as a rolling chassis in the museum.

“It’s been purchased by an enthusiast who now asked to turn that car back into how it raced back in ’93 and then to run as a Historic Touring Car which I think is an amazing thing to do and I can’t wait to get our hands on it to do that.

“If that needed me to shake that down and get that car sorted before he was to race it then absolutely that’d be part of the program that we’d do as part of the rebuild phase.”

Team Johnson is also set to bring a Ford XD Falcon to Paynter Dixon Touring Car Masters early next season, with the design process close to finishing up.

Johnson himself will race the XD, meaning that he will vacate the 1969 Ford Mustang which he and Bowe have each taken to multiple TCM titles.

However, there is still a high chance both cars will be on the grid next year.

“We’ve got a lot of people that have inquired about racing the Mustang when I jump into the XD,” said Johnson.

“That’s something that we’re definitely looking at doing, leasing out the Mustang to someone who is really keen on racing that car when I am in the new car and preparing that from our own facility here on the Gold Coast.

“So, it’s an exciting time for us and we’re not going to just limit it there.”

Team Johnson is also investigating a potential Dunlop Super2 Series program as part of its plan to expand into different categories.