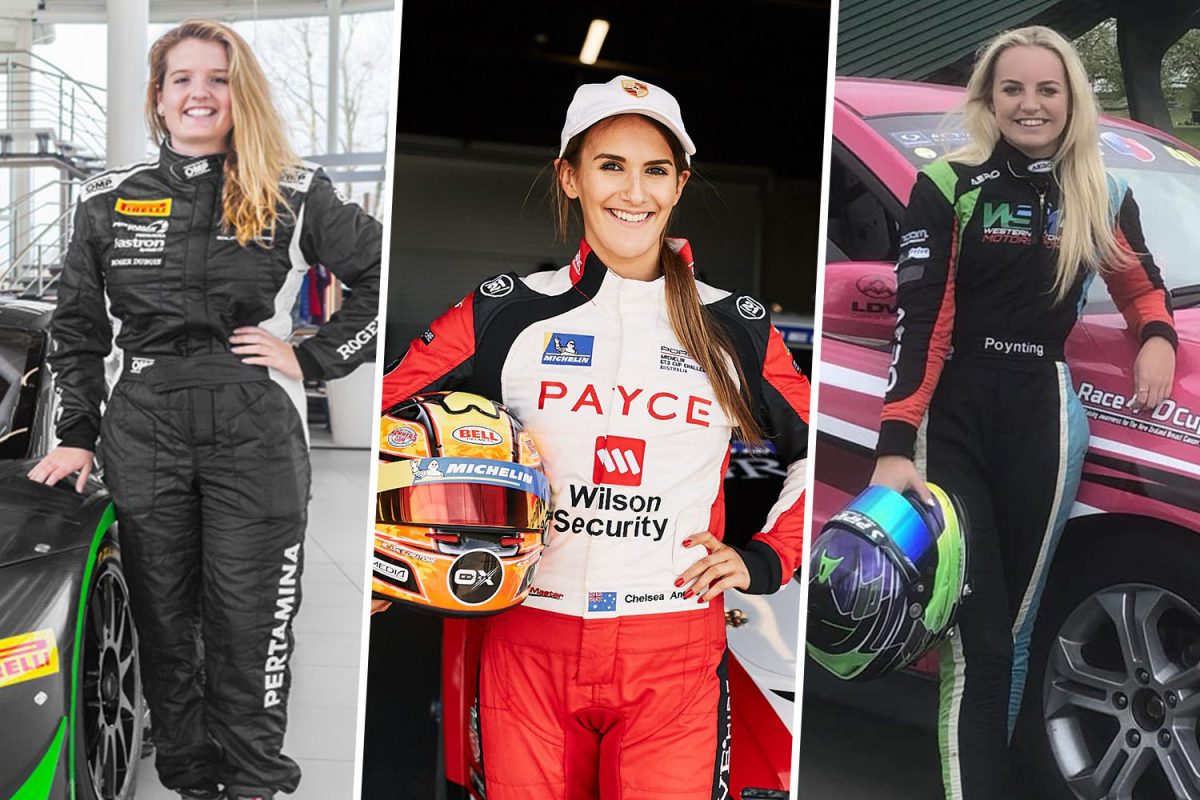 The three Australian drivers selected to take part in the qualifying evaluation ahead of the inaugural W Series competition next year are looking forward to what they believe will be a career defining opportunity.

Chelsea Angelo, Charlotte Poynting, and UK-based Aussie Caitlin Wood were all selected as part of a short list of drivers who will undergo a shootout style evaluation in Austria next month, the outcome of which will determine the drivers who will make up the grid for the competition’s inaugural season.

Those who are selected will be given a fully funded driver in the all-female series that offers the winner nearly $700,000 (US$500,000) in prize money.

“This is my first time ever going to Europe, so I’m over the moon and absolutely stunned to go over to Austria to do the assessment,” Angelo, who proved one of the standout performers in Porsche Michelin GT3 Cup Challenge this year, told Speedcafe.com.

Poynting, who has been logging miles in Aussie Racing Cars, SuperUtes, and will next month compete in New Zealand in the Ssanyong series, is similarly enthusiastic.

“It’s an amazing opportunity,” she said.

“When they first announced the series I had mixed emotions; I guess no girls want to be segregated from men in motorsport but when W Series released more information on the category and what their hopes really are, I think it’s such a great initiative to push women to achieve that extra level.”

Having competed in the Lamborghini Super Trofeo series in Europe, Caitlin Wood believes it offers a unique opportunity that allows competitors to focus on their driving without the usual commercial distractions.

Wood is the only one of the Australian trio currently based in Europe, where she’s working with PalmerSport as a driver trainer.

“It’s a massive opportunity for any driver to be honest,” Wood told Speedcafe.com.

“Everything’s paid for and it’s somewhere you can work on your own driving in the championship and not have the stress of the financial side of things.”

The four day evaluation is set to take place on the final weekend of January, with drivers expecting to learn their fate over the course of the four days.

All facets of a driver’s performance will be considered, both on- and off-track, though weighted in favour of on-track performance.

With the series set to run Tatuus Formula 3 cars, Angelo hopes her experience racing in the Australian F3 series will offer an advantage in the evaluation process.

“I’m so lucky and grateful to obviously have done Formula Ford and Formula 3, so at least I’ve got a bit of knowledge about how the aerodynamics work in a Formula 3 car, what the grip level is like, what the speed’s like in these cars because they’re completely different if you look at the likes of Supercars or even Porsches.

“They’re a completely different style of driving, especially in smoothness and how smooth you’ve got to be in a Formula 3 car.”

Both Wood and Poynting hope to gain some seat time ahead of the test, though timing and budgets are limiting factors for both.

“If I was worried I shouldn’t be in motorsport, should I!?,” Wood joked.

“Obviously it’s going to be difficult, championships like this are created to find the best.

“Right now I’ve currently been in GTs for the last three years but I do come from an open-wheel background, that was the first race car I did drive in, a Formula Ford back in Aus and I did a few F4 rounds back in Aus, but that was fundamentally as far as I took it in formula cars.

“I am really excited to get into an F3 car, I think your first session is going to be very different to what I’m used to but I don’t think it’s going to take me very long to adapt.

“There’s quite a few women who have qualified that have done quite a bit of Formula 3 racing, they do have a little bit of an advantage in being able to be quick straight out the gate, but the qualifying that they have at the end of January is based on all skills.

“It’s how quick you are in the car, car control, how quickly you can adapt to new vehicles so they’re obviously putting us in different types of vehicles, so they really want to get an all-round good driver, and I think I am one!”

“It’s going to be an absolute massive challenge,” added Poynting.

“I’ve never driven anything even remotely similar to a Formula 3 car before so I’m hoping I can get into something, even just an open wheeler before then, but it’s not looking too promising at the moment.

“We’re doing everything we can to try and find an opportunity but the best I can do is a lot of work on the simulator and make sure my fitness is up to scratch.”

The 2019 W Series will support selected rounds of the DTM series, with the first round to be held at Hockenheim in May.