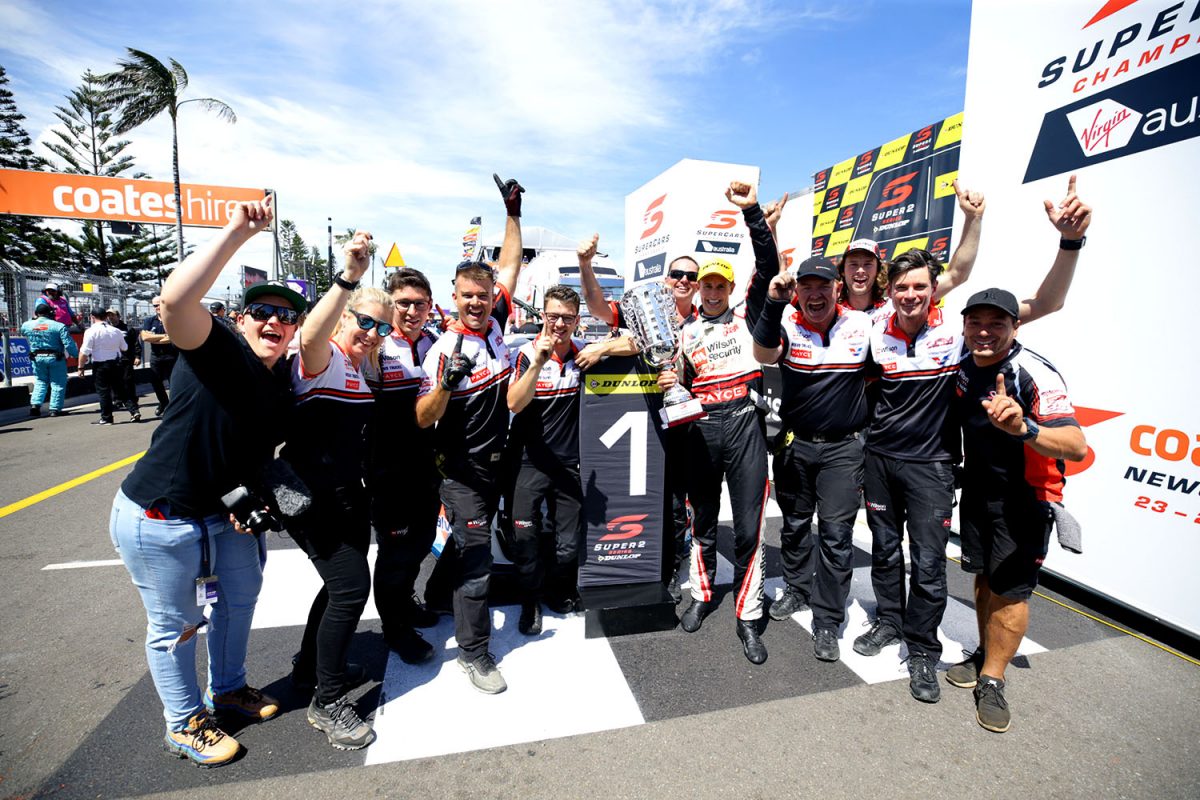 Dunlop Super2 Series winner Chris Pither has admitted he doesn’t yet know if he’ll be returning to the grid in 2019 despite achieving the first Supercars title in Garry Rogers Motorsport’s history in Newcastle.

A second placing in Race 1 of the weekend at the Coates Hire Newcastle 500 proved enough for Pither to seal his first series triumph in a Supercar after the second was called off while he led fairly comfortably.

However, amid GRM’s loss of Wilson Security sponsorship, which was the major backer also of its Super2 entries including through its New Zealand brand First Security for Pither’s #44 VF Commodore, the Kiwi has admitted his role could contract to just a co-driving role in the Pirtek Enduro Cup.

“(I have) nothing locked in at this point,” he explained.

“(I will) Be doing the enduros again, I’d like to race in the Dunlop Series full time again if I could, but at this point the option to continue is not there unfortunately.

“I’m working hard behind the scenes to try to scrape something together and find some way to continue.”

The New Zealander had rejoined GRM for another tilt at the Supercars enduros, as well as returning to Super2 having last competed in the second tier in 2015 with MW Motorsport.

“Garry and Barry (Rogers) are great to drive for to be honest,” said Pither.

“They are pretty relaxed and pretty much what they told me was ‘go and have fun’,” he added of their words prior to the weekend.

“So, that’s pretty much the approach I took and there’s no pressure from them and the entire team.

“I was very grateful and lucky for the opportunity with which they presented me and the effort they put in behind the scenes as well.

“They have been great with they have provided me with this year and to be able to get them that championship is a special feeling.”

Garry Rogers described his Super2 team’s performance, including that of Mason Barbera in its second car, as his “highlight of the weekend.”

He paid tribute to Pither’s perseverance after 14 years chipping away in Australian motorsport.

“I was so happy for Chris as he is a true racer who has done the very hard yards from driving race transporters, working several jobs and so on to live his dream of racing cars,” Rogers wrote in his Newcastle review post.

“He comes from a wonderful family who share his desire of racing and although they may not have the financial resources to assist his racing career as it advanced past go karts, they have been tremendous support to him as have been many of his friends.

“It was certainly a win for the good guys!”

Alongside his Super2 Series effort Pither’s season included three top 10s in as many races in the Pirtek Enduro Cup with Tander, namely ninth at Sandown, sixth at Bathurst, and ninth in the Saturday race on the Gold Coast.

Now, in its 23rd year in ATCC/(V8) Supercars, the Victorian squad has a series win to its name.

GRM came closest to winning the Virgin Australia Supercars Championship in 2000, when Garth Tander finished runner-up to Mark Skaife in the standings.

He did so despite winning the season-ending Supercheap Auto Bathurst 1000 with Jason Bargwanna, while GRM’s other two major accomplishments have been victories in the two runnings of the Bathurst 24 Hour when it operated the factory-backed Holden Monaros.