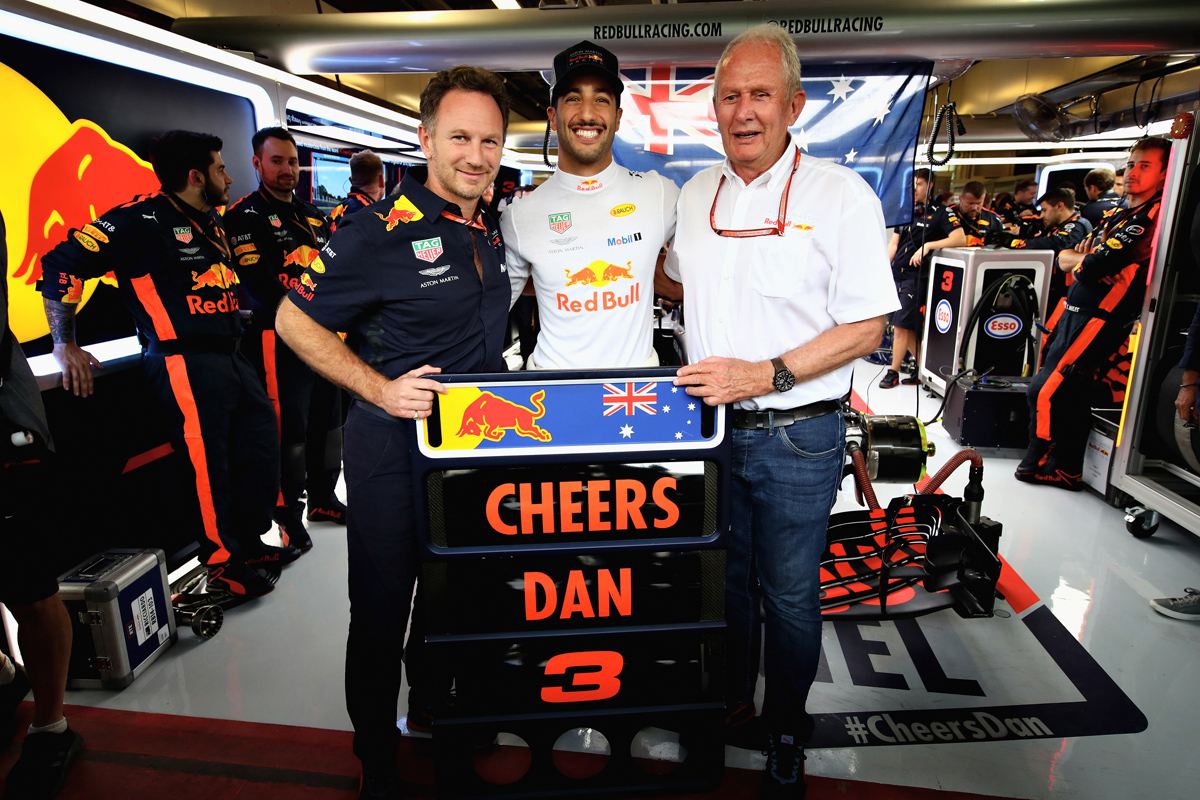 Daniel Ricciardo says he felt helpless as he finished fourth in the Abu Dhabi Grand Prix to close out the Red Bull chapter of his Formula 1 career.

For next season he will join the factory Renault team alongside Nico Hulkenberg, bringing to an end a five-year stint with the senior Red Bull team.

It also ends a relationship that stretches back to the Australian’s junior career when he first headed to Europe, the drinks company having played a critical role in his progression onto the F1 grid.

In Abu Dhabi Ricciardo was the last of the front runners to stop for tyres, a strategy which saw him lead during the middle part of the race.

While it meant the Australian rejoined on fresher tyres and therefore with greater pace than those ahead, he was only able to pick off the struggling Valtteri Bottas to climb to fourth.

“I led a bit, that was fun, but it just put me out of reach then with the leaders,” Ricciardo explained of his race.

“I don’t know if we had many other options. Obviously, we could have pitted early and kept track position but it’s always hard to know.

“Lewis pitted really early and probably didn’t think that would go to the end so strongly.

“It was alright, just a bit kind of helpless at the end, just couldn’t do much. The pace advantage initially was strong and then it fell away quite quickly. We just probably weren’t quite quick enough.”

Prior to the race the team formed a guard of honour for Ricciardo as he entered the garage for the final time.

With wins in China and Monaco, Ricciardo ended the season sixth in the drivers’ championship with 170 points, his worst championship result since 2015.

“As a whole obviously the time here was good,” Ricciardo added.

“Some obviously amazing memories and a lot of things I’m sure I’ll reflect on in a few hours, but now initially I just, I was a bit lonely the last few laps.

“I couldn’t really do much more but obviously a third and fourth for the team, it’s solid but yeah, we close this chapter now.

“Thanks to Red Bull and the whole Red Bull family. Would have loved to drink out of my shoe, but we’ll see. Still a few hours to go!”

Horner also reflected on Ricciardo’s stint with the team, admitting he would miss the popular Aussie next season after thanking him over the radio once the chequered flag fell.

“We’ve seen him grow from when he first arrived in Europe as a 16 year old and his progression through the junior team, through Toro Rosso, into Red Bull Racing – 100 races with us, seven victories,” Horner told Sky Sports.

“He’s such a big character as well, we’ll miss him.

“We wish him all the very best for the future bit it’s been a blast having him in the team.”

Ricciardo expects to wrap things up with Red Bull in the next week, before beginning to integrate himself with his new employer soon after.

“Next week I’ll close let’s say close everything off with Red Bull,” he said.

“Then I imagine the following week start to initially know a few people at Renault.

“After that go home, go to Australia and switch off for a bit.

“It’s been a long season, so looking forward to going home and I don’t know, just talking to the sheep and the cows on the farm and not doing a whole lot for the first few days.”