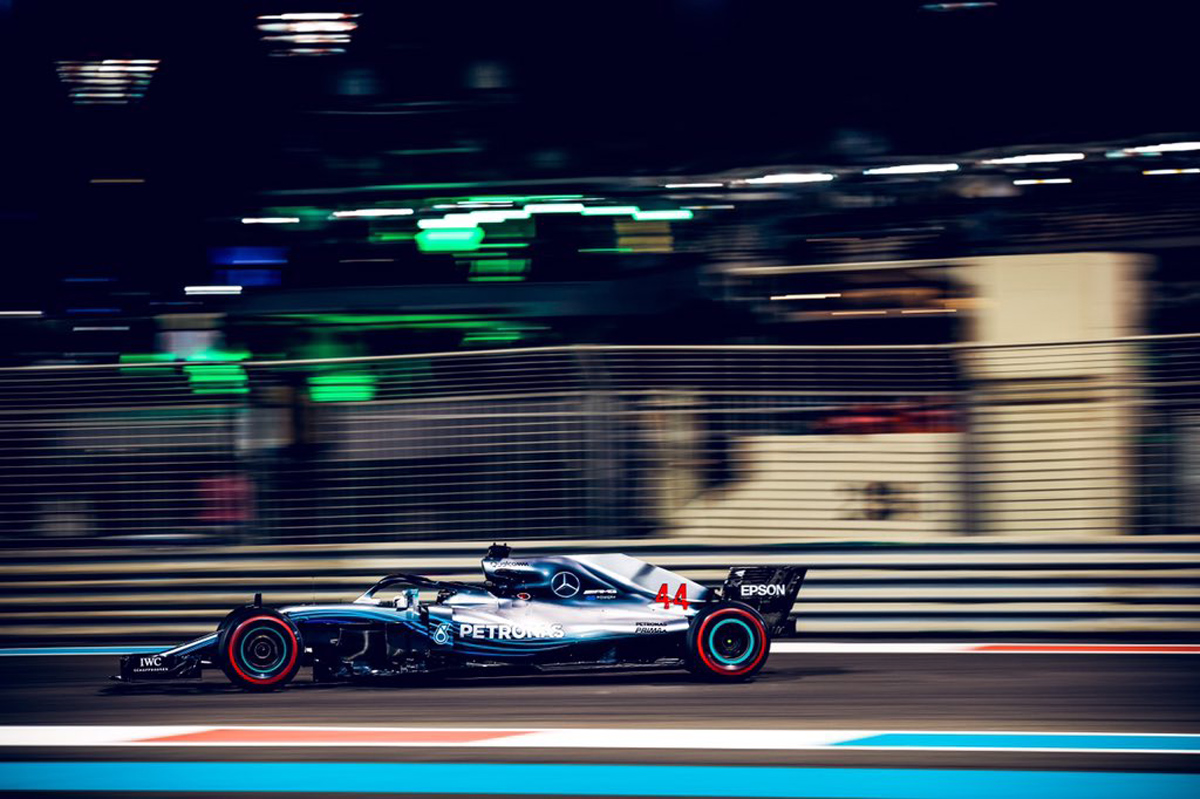 Lewis Hamilton has claimed his 11th grand prix win of the year as he became the first driver in Formula 1 history to score more than 400 points in a single season.

The Englishman led from the start of the Abu Dhabi Grand prix before stopping early, nursing his supersoft tyres to the finish to take victory.

He headed Sebastian Vettel to the flag while Max Verstappen charged back to third after a slow start left the Dutchman 10th on the opening lap.

An even start from the front two rows saw Hamilton lead Bottas and the Ferraris into the opening corner while Verstappen bogged down and slipped from sixth to 10th. Contact for Nico Hulkenberg saw the Renault end up upside down against the barriers midway around the opening lap following contact with Romain Grosjean.

Because the car was resting against the barriers the German was unable to climb free of the car until it was tipped back onto its wheels.

It predictably triggered the Safety Car as marhsals worked to recover the stricken Renault, which was temporarily on fire.

A strong restart left Hamilton with a handy advantage when the race got back underway at the start of Lap 5 from Bottas, Vettel, and Leclerc who’d dispatched of Ricciardo.

Verstappen slip-streamed beyond Sergio Perez having been mugged as his car struggled for power shortly after the restart before diving underneath Esteban Ocon on the following lap.

Unperturbed, Ocon battled back and drove by on the next straight only for the Red Bull to outbrake the Force India to finally claim eighth.

A Virtual Safety Car was called when Kimi Raikkonen parked up on the front straight at the start of Lap 8, having just been passed by the impressive Leclerc for fourth.

Mercedes took the opportunity to pit Hamilton, handing the race lead to Bottas as the pole sitter fell to fourth.

The race quickly restarted with Vettel second from Ricciardo, Verstappen and Hamilton as Leclerc also stopped under the Virtual Safety Car.

Hamilton made short work of Verstappen, only to lose the place on the following straight as the Red Bull charged back through.

As the stint wore on both Red Bulls enjoyed strong pace and began edging clear of Hamilton and in turn closing up on second placed Vettel.

Neither had taken the early interruptions as an opportunity to take service, continuing to circulate on the ultrasoft tyres while Hamilton nursed his new supersofts as he looked to run to the flag.

Vettel boxed on Lap 16, rejoining immediately behind Ocon but quickly moved beyond the Force India on the first of the two long back straights.

A lap later was Bottas’ turn, stopping from the lead to have a set of red walled tyres to emerge in fourth behind Hamilton.

Ricciardo was left out front when Red Bull called Verstappen into the lane, rejoining behind Vettel in fifth place.

Just before half distance light ran began to fall, though initially never heavy enough to warrant a switch to intermediate tyres.

Ricciardo finally stopped on Lap 34 to slip to fifth but with much fresher tyres than the four cars ahead.

Vettel put a move on Bottas to claim second on Lap 35, using DRS to cruise by the Mercedes driver on the second of the two back straights.

Bottas quickly fell into the clutches of Verstappen, while Daniel Ricciardo was on a charge by setting the fastest lap of the race.

The second Mercedes was clearly struggling, a lock up allowing Vettel his opportunity to pass before running off the road as Verstappen steamed up on him.

Having closed in at some two seconds a lap, Ricciardo then lined up the Mercedes, moving underneath him midway around the 39th lap.

Bottas tried to fight back but the Australian positioned his car perfectly to defend his position before setting off in pursuit of Verstappen.

Hoisting the white flag, Mercedes hauled Bottas in and swapped him onto the ultrasoft tyres for a final 15 lap run to the chequered flag, rejoining without losing a position in fifth.

Ocon’s race ended in retirement with smoke pouring from his engine, rolling to a halt in the pit entry lane with its rear wheels jammed.

Pierre Gasly then suffered a similar fate, the Frenchman in 10th before eventually stopping at the end of the back straight on Lap 49.

Out front Hamilton held on to win from Vettel and Verstappen, with Ricciardo just missing out on a podium in his final appearance for Red Bull.

Bottas cruised home in fifth after his late second stop over Carlos Sainz, Leclerc, Perez, Grosjean and Kevin Magnussen to round out the 10.

After the flag Hamilton, Vettel, and Alonso performed doughnuts on the front straight, two in celebration of their podiums results and the latter as a send off to a career which netted two world titles.