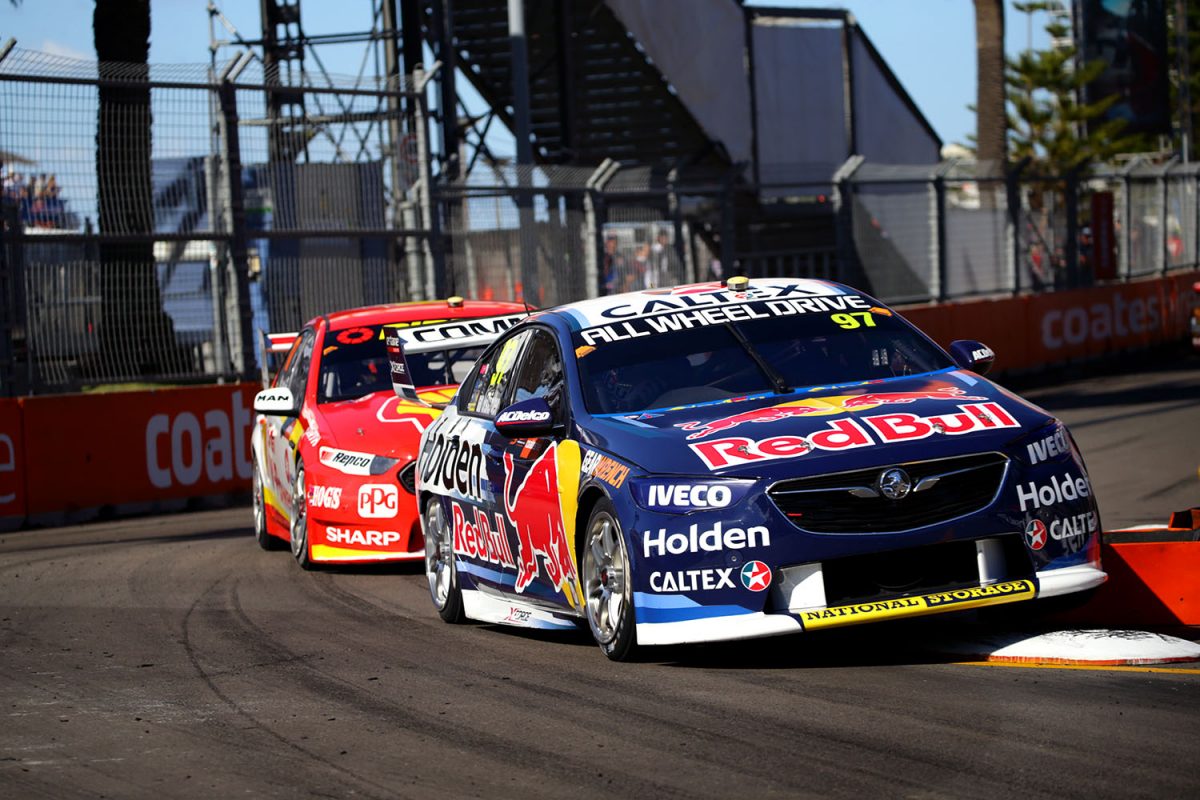 Stewards have issued a 25 second time penalty to Shane van Gisbergen for a breach of the refuelling rules, handing title rival Scott McLaughlin the Race 30 victory.

Officials have deemed that Car #97 breached rules during its third pit stop on Saturday, which state that refuelling must be completed before the car is lowered to the ground.

The matter was investigated last night which resulted in Deputy Race Director Michael Masi recommending a penalty which was disputed by Triple Eight.

Following a further review this morning, the stewards have issued a time penalty which drops van Gisbergen to fifth in the results.

He only needs to finish sixth if Van Gisbergen wins today’s 250km race to seal a maiden Supercars title.

The stewards summary confirmed television footage which suggested that the Triple Eight spike man removed the air spike, which feeds the car’s onboard jacks, when the fuel man flinched.

Triple Eight did not contest that the car was therefore sitting on the ground while the fuel hose was still attached, which is a contravention of regulations only remedied by re-raising the car to remove the hose. That did not happen.

The stewards summary adds that, “The issue is whether fuel was being transferred to Car #97 while the coupling remained connected.”

Triple Eight sought to argue a technicality that the car was not being ‘refuelled’ as defined in the Operations Manual as no fuel was being delivered at the time the car was lowered.

Rule D25.4.2 states that ‘Refuelling means the transfer of Fuel to a Car using a Refuelling Tower’, but Triple Eight contended that the fuel man flinched when he noticed an air bubble in the hose which suggested the tank was full and therefore refuelling was no longer occurring.

Further, it argued that since refuelling was completed, there was no need to re-raise the car to meet the tolerance in the regulation.

However, fuel will keep flowing and pass into the vent hose until ‘hydraulic equilibrium’ is reached by the level of fuel in the vent hose.

Stewards noted that after the fuel man’s flinch, he continued to hold the hose in which suggested fuel was in fact still flowing.

It stated in its decision:

“We accept the DRD’s submission that a reasonable inference is open to be drawn from the fact that the coupling remained connected that fuel was continuing to transfer to Car #97. We are not satisfied that the Respondent has rebutted that inference. In our view, the fact that the fuel attendant continued to keep the coupling connected notwithstanding that he had apparently seen an air bubble in the vent hose (being a sign that the tank is or is approaching full) suggests that the fuel attendant was not confident that the tank was in fact full at that point and, for that reason, remained connected and then disengaged when he realised that the air spike had already been removed. Either the air spike attendant misinterpreted the “flinch” by the refueller or the refueller had intended to signal the air spike operator to drop the Car but then reconsidered and by then it was too late. In our view, the apparent doubt on the part of the fuel attendant as to whether the tank was full tells against the Respondent’s submission that we should find that the tank was so full that hydraulic equilibrium had been reached.

“We therefore find the charge has been proved.

“We reject the Respondent’s contention that Rule D25.6.3.2(a) implies that the Respondent is entitled to the benefit of a tolerance in circumstances where Car #97 was not raised immediately.”

Triple Eight also attempted to claim that there was no ‘sporting advantage’ to van Gisbergen and therefore only a teams’ championship penalty should apply.

Stewards rejected that argument as van Gisbergen took on fuel while the car was on the ground, and the fact that McLaughlin initially lost the race win due to running short of fuel demonstrated that a sporting advantage had been gained.

“The volume of fuel in this case may have been small but the outcome of the Race demonstrates the potential for fine tolerances in full volumes to affect the results,” stated the stewards summary.