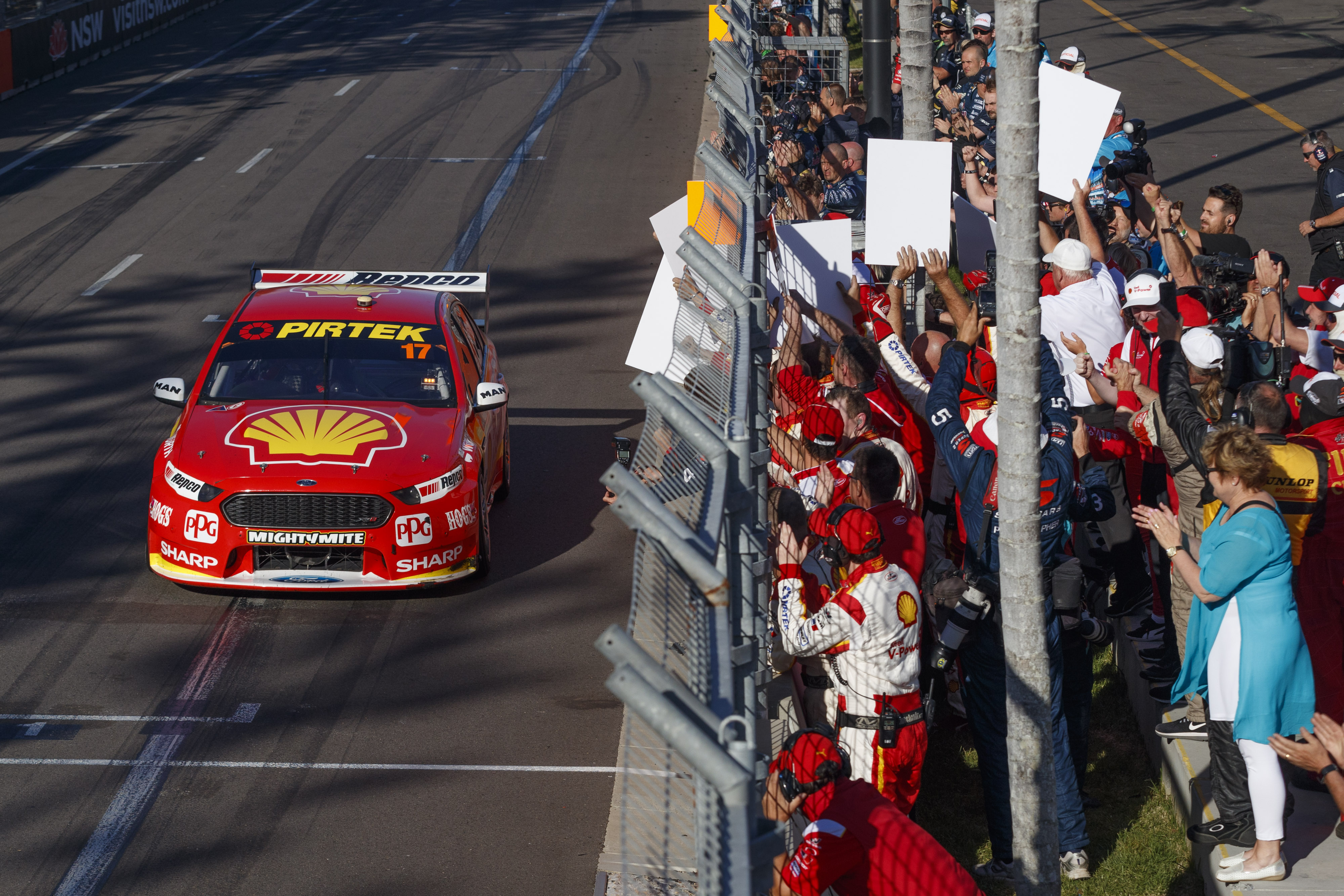 The DJR Team Penske driver, who needed to finish only sixth in the second leg of the Coates Hire Newcastle 500 to make the championship his, took over the lead in pit lane under a Lap 20 Safety Car and led for the majority of the 95-lap encounter.

However, after early leader Reynolds had closed down a gap of just over two seconds with 35 laps remaining to nothing with five laps to run, McLaughlin played it safe by letting Car #9 past on the climb up Watt Street on Lap 91.

Reynolds went on to win by 4.7s in the Erebus Penrite ZB Commodore while McLaughlin was comfortably clear of outgoing champion Jamie Whincup (#1 ZB Commodore), who rounded out the final podium of the year.

Whincup’s Triple Eight team-mate Shane van Gisbergen, McLaughlin’s only championship rival, spent most of the afternoon racing in fourth or fifth position and took the chequered flag in the former.

The difference between McLaughlin and van Gisbergen at season’s end is 71 points.

“Oh my god… all the guys, everyone here, worked so hard,” said the new champion.

“Look, I have to pay respects to Shane, we raced hard all year. It was a hell of a battle… oh man.

“Thank you to my Mum and Dad; my Gran, I know you’re watching up there because I promised you I’d do this; Karly, my fiancé for sticking by me through the whole thing. All these guys, Shell V-Power Racing… I’m just absolutely amazed.”

On the question of redemption after the 2017 heartbreaker, he responded, “We’ll call it that.

“Holy smokes, I just can’t believe we’ve done it. Holy guacamole. Thanks to Fabian (Coulthard), he’s been an amazing team-mate, (and) the fans; wouldn’t be able to do it without them.”

Reynolds said that he knew he could press home his advantage given that McLaughlin had an eye on the bigger picture.

“I had a mega, mega car out there,” said Reynolds.

“Got a really good start, my second stint wasn’t the best, Scott got away from us and we had a bit of fuel time on him to lose.

“Then the last stint, car got better and better. I could see him start to slide and stuff and I kept thinking to myself, ‘If he’s smart, he’ll let me go’ and I was like ‘Woo, how good is this.’

“I was lining him up for a crack anyway, I’m here to win; he’s won the championship. He’s done a great job all year and it couldn’t go to a better driver.”

McLaughlin was quick to slot in behind Armor All Pole-sitter Reynolds on the run to the first corner, while Garth Tander bested van Gisbergen from the outside for the second row.

Tander did not try and resist when van Gisbergen fired down the inside at Turn 8 before the lap was out, and while the 2016 champion briefly pressured McLaughlin, he could make no serious impression on Car #17.

The top four ran as you were until Lap 20, when a Safety Car was called as a result of an incident between the championship combatants’ respective team-mates, Coulthard and Whincup.

Having already made their first pit stops, both from inside the top 10, Whincup was chasing down Coulthard and showed the nose at Turn 12.

The ensuing contact caused the #12 Shell V-Power FGX Falcon to spin and hit the wall backwards, plucking off its rear wing.

While the touch occurred a long way back on the side of the Ford, officials opted to not issue a penalty.

At the time, Reynolds was around 2.3s up the road and about 1.0s separated McLaughlin from van Gisbergen, but a combination of refuelling strategy and earlier pit stops scattered the early top three.

McLaughlin reportedly took on 65 litres and moved into the race lead, Reynolds was second with another 75 litres onboard, Whincup was elevated to third and James Courtney to fourth, while van Gisbergen dropped back to fifth with a 57-litre fill out of a required total drop of 140 litres.

Car #17 continued to lead through a fairly quiet middle stint of the race and the track position allowed McLaughlin to build a gap of around 4.8s, enough to cover the extra fuel, when he and Reynolds pitted together at the end of Lap 52.

Van Gisbergen twice closed up on Courtney but did not seriously threaten a pass before he pitted after Lap 47, and they traded the effective fourth position once the 2010 champion pitted for a necessarily longer fill.

Whincup inherited the official race lead with McLaughlin’s and Reynolds’ second pit stops before taking his own a lap later, slotting back into an effective third position.

McLaughlin’s lead over Reynolds was about 2.1s on Lap 60, just after he had regained the nominal race lead, but was gradually whittled away over the next 30 laps.

With the #17 FGX Falcon and #9 ZB Commodore also coming up on traffic by that point, McLaughlin ceded the lead and cruised home to win his first championship and the Falcon’s 17th in its last season in the top tier of Australian motorsport.

Whincup had an extremely lonely run home, while van Gisbergen briefly saw some attention from Courtney before gapping the #25 Boost Mobile ZB Commodore.

The main point of intrigue about van Gisbergen became the inner guards in the front of the #97 Red Bull HRT ZB Commodore, of which the right started flailing a little over 20 laps from the end and the left not too long later.

He avoided a mechanical black flag and held the position, 1.5s clear of Courtney in the end.

Nick Percat was on for a solid top 10 but had to pit a third time from sixth position on Lap 73 after his #8 Timken ZB Commodore came up one litre of fuel short of the required 140 in his second stop.

He finished 12th, while Mark Winterbottom (#5 The Bottle-O FGX Falcon) was last car on the lead lap in 13th.

The other noteworthy incident was a crash for Simona de Silvestro on Lap 75.

The Swiss driver had just passed Tim Blanchard (#21 CoolDrive ZB Commodore) at Turn 8, only to be unloaded by him one corner later and back into the wall.

Blanchard copped a drive-through while de Silvestro, who had to pit to remove torn-up bodywork from the #78 Harvey Norman Nissan Altima, was also hit with a five-second time penalty having nudged Car #21 into Turn 7 as the stoush began.

At the chequered flag it was Blanchard in 22nd and de Silvestro in 24th, both a lap down, while Coulthard made for 26 finishers from as many starters, albeit 20 laps off the pace.