Ryal Harris has extended his SuperUtes Series lead by winning a chaotic race in Newcastle which saw imputations of dirty tactics and a drive-through for title contender Craig Woods.

Woods caused one of the two Safety Cars when he turned Steve Wilson around coming down Shortland Esplanade on the first restart, for which he was issued a drive-through penalty.

Harris (#58 Mazda BT-50) had no such trouble as he threaded his way through from seventh in a full reverse grid to take the lead upon the second restart on Lap 7 and win by over two seconds. Cameron ranged up on the outside of Mick Sieders’ #45 Sieders Racing Team Mitsubishi Triton at the second corner and they bumped side-to-side, feeding the BT-50 onto the tyre wall and tearing its right-front steering arm out.

Peters Motorsport team manager Brett Peters alluded to dirty tactics as an explanation for the crash, after Harris was excluded from qualifying for coming in underweight when his ute shed its tonneau cover.

“I’m not really sure but I think SuperUtes this weekend’s a new low point,” said Peters.

“I mean, Ryal was pinged for being underweight when clearly the lid was off. Supercars allow, all the other categories all the cars to be weighed as they are racing but the lid clearly flew off but he got pinged for that.

“And then, you guys (television crew) will have to talk to Aaron but something was mentioned to him this morning and that looked not accidental to me, so I think it’s a bit of a low point for SuperUtes.” 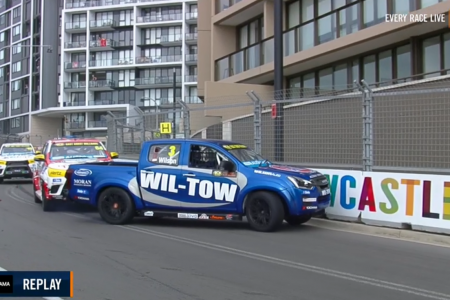 Harris sat fourth under Safety Car and Woods eighth, but the former gained two positions on the run up Watt Street again as Matt MacKelden (#99 SRT Hilux) took over the lead. However, the field only made it as far as Shortland Esplanade when Woods tagged Wilson, who had led at the restart but already plummeted to sixth.

Wilson hit the wall and appeared to also bump Woods into the concrete as he spun, before being collected by the hapless Poynting, causing another Safety Car.

Under that yellow period, Harris sat second and Woods sixth, and while the former made light work of MacKelden up Watt Street on the Lap 7 restart, a black flag was waiting for the latter.

Justin Ruggier (#18 Team 18 Colorado) nearly hit that black flag which a marshal was holding at Nobbys Hairpin after being pushed long by a locked-up Ben Walsh (#8 WSM Hilux), while a struggling Woods was already losing track position when he filed into pit lane.

Assuming no change in worst rounds dropped for Harris or Woods, Harris need only finish ninth in a maximum 13-car field in Race 3 to win the inaugural ECB SuperUtes Series.

That encounter, scheduled for 10 laps, starts at 1145 local time/AEDT.