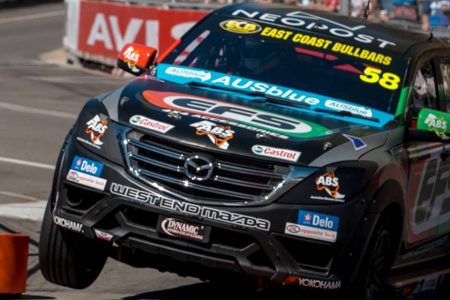 Ryal Harris has won the inaugural ECB SuperUtes Series with a third position in the final race in Newcastle, which was won by Tom Alexander.

Harris ran with reported steering damage for almost the entirety of the 10-lap race, while his only series rival Craig Woods succumbed to mechanical dramas at the halfway mark.

Alexander was untroubled on his way to a second race win of the Coates Hire Newcastle 500 weekend and sixth of the season in the #22 Ross Stone Racing Holden Colorado.

He and Aaren Russell (#87 Sieders Racing Team Mitsubishi Triton) started Race 3 from the front row but the latter pinched the right-front at the first corner and ran into the tyre wall, at which time he was glanced by Harris, who had started fourth.

Woods took the opportunity to pass Harris for third as they ran onto Watt Street, while Ben Walsh ran second to Alexander.

The Safety Car was soon called, at which time it became apparent that Harris had a steering drama as he held left-hand-down on the #58 Peters Motorsport Mazda BT-50 despite appearing to only scrape bodywork in the contact with Russell.

The restart on Lap 4 was clean but Woods meekly gave up third position to Harris as they ran underneath Fort Scratchley next time around, before pitting the #64 Western Sydney Motorsport Toyota Hilux.

The SRT crew which runs WSM’s SuperUtes attended to the Penrith Toyota entry before Woods confirmed that “something fail(ed) in the rear.”

Harris had eyes forward for Walsh by then, and applied pressure to the #8 WSM Hilux but could not find a way through.

It mattered not as he had already started the race ahead of Woods in the standings, at the time needing to finish no worse than ninth to make the title safe.

Alexander took the chequered flag almost two seconds to the good from Walsh and Harris, while Team 18 stand-in Justin Ruggier gave the squad its best result in the series to date with fourth in the #18 Holden Colorado.

Aaron Cameron (#95 Peters BT-50) rounded out the top five as nine of the 11 starters finished the race.

The series win is Harris’ fourth in total in V8 Utes/SuperUtes history, having last collected season honours in the former category in a Falcon in 2015.