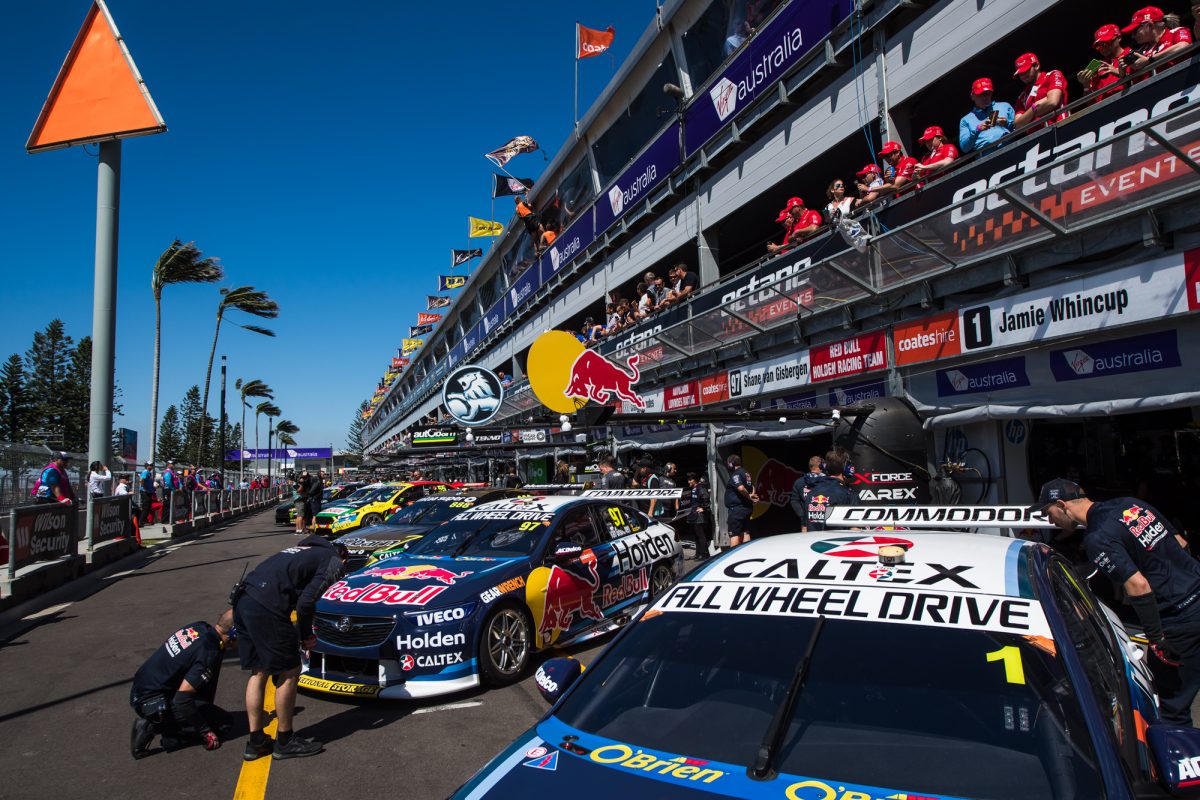 Van Gisbergen and his Triple Eight crew ended Saturday afternoon on a major high when he ran down a fuel-starved leader Scott McLaughlin on the final lap, after it seemed his hopes of a win had been thrown away.

The result tightened up the margin at the top of the standings to two points, meaning that Race 31 in Newcastle was a simple case of he who finished higher of van Gisbergen and McLaughlin would win the championship.

However, a post-race review found that Car #97 had been dropped onto the deck with the fuel hose still attached in contravention of regulations, and an appeal by Triple Eight against the decision, as well as a bid to cop only a teams’ penalty rather than one directly applied against van Gisbergen, were unsuccessful.

McLaughlin ultimately needed to finish only sixth today to have the championship safely in his grasp, but led for much of the 95-lap conclusion to the Coates Hire Newcastle 500 before avoiding a potential stoush with David Reynolds, who took victory.

“Honestly, it (penalty) affected all of us, I mean it was totally demotivating,” said Triple Eight boss Dane on Fox Sports’ Supercars Trackside.

“We had absolutely no problem being beaten in a fair fight by Scotty McLaughlin and his crew but to be beaten by poor decision-making in the officialdom area of the sport, which was nothing to do with Shane…

“And you saw in that race just now, there was a pit lane infringement and the team got a penalty (as opposed to the driver), and that’s what should have happened yesterday if it was an infringement.

“Shane had every right to feel demotivated, to be honest as the team did. I mean, honestly, the wind was taken out of our sails, which was a great pity.

“But that shouldn’t reflect on the fact that Scotty won the championship properly and I don’t want to take anything away from that.

“He deserved it and the fact is that he could well have won today anyway, even if we’d been running at our maximum capacity, but I know Shane feels depressed about that last night and so does the crew, but we’ll get over it.”

McLaughlin indeed had done enough under either a penalty or no penalty scenario, given that van Gisbergen finished fourth in the final race of the season and only very briefly threatened to head his key rival at any stage.

The Race 31 pit lane incident to which Dane referred involved Preston Hire Racing, which copped a 30-point teams’ championship penalty and $3,000 fine when a wheel strayed into the fast lane.

Such sanctions are commonplace for indiscretions of the kind, committed by pit crew members rather than the driver specifically, a point which Triple Eight attempted to argue.

Key to the apparent discrepancy was that stewards determined that van Gisbergen gained a ‘sporting advantage’ by likely taking on more fuel while his car was on the ground.

They noted the context of the race, which was decided by McLaughlin running out of fuel on the final lap, and handed van Gisbergen the equivalent of a pit lane penalty (25 seconds added to race time) which relegated him to fifth and promoted #17 to first.

Dane had high praise not only for McLaughlin himself but DJR Team Penske in general, likening the joint-venture operation’s rise to Triple Eight’s own in the middle of the preceding decade.

“They’ve raised the bar here in a way which I’d like to think we did a decade or so ago, and we’ve got to try and keep up,” he said.

“But we’ve got a track record that I’m very proud of and that extends to this year as well; we’ve won a teams’ championship, Enduro Cup, Bathurst, plenty of race wins, (and) we’ve only had one race meeting this year where we haven’t been on the podium at least once, so honestly, I’m proud of that.

“I’m proud of what all three drivers have done, and taking it down to today, to be honest. We’ve been first or second in the championship every year since ’05.”

Triple Eight bought the Briggs Motorsport operation midway through 2003 and spent much of the following season around the back of the field as they developed their then-Ford Falcon hardware on race weekends.

However, Craig Lowndes scored the Banyo squad its first race win at what was then known as Eastern Creek in 2005, and Triple Eight has gone on to win the Supercheap Auto Bathurst 1000 seven times since and the drivers’ championship eight times.

While it missed out on the latter title this year, it locked up a ninth teams’ championship in the past 11 years three weeks ago at Pukekohe.