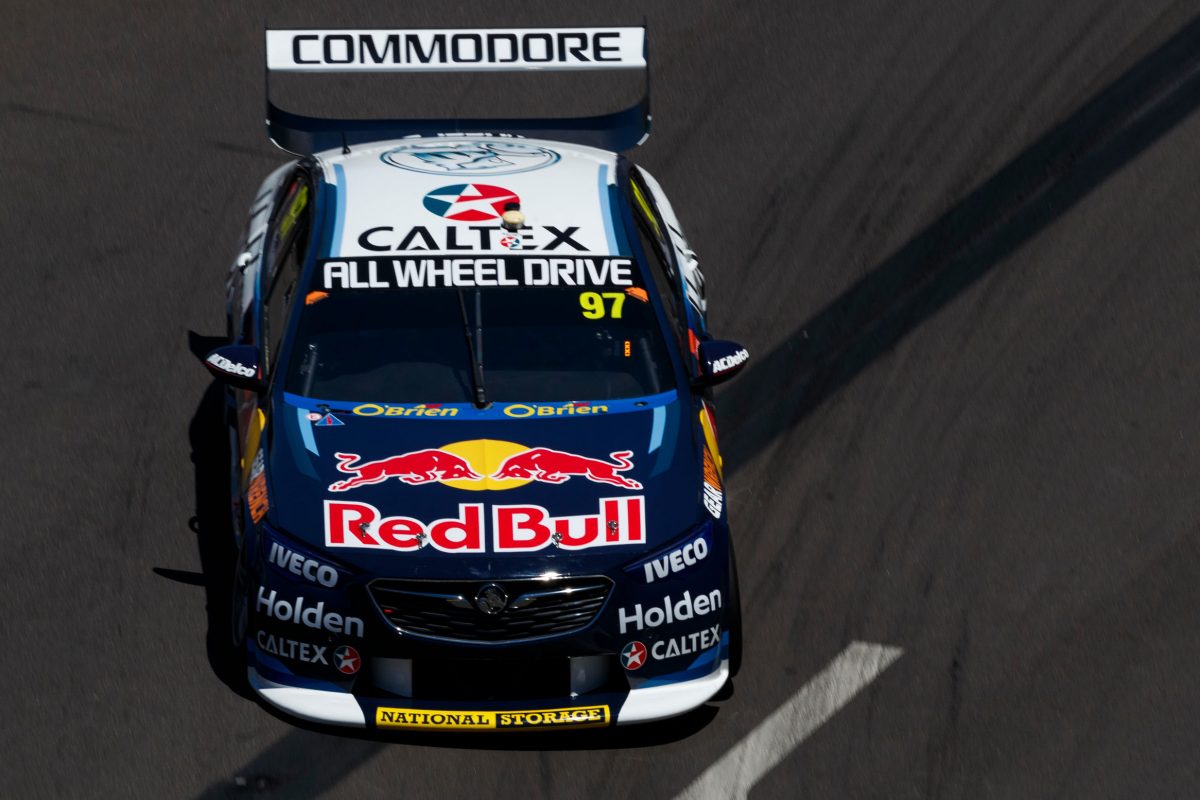 Scott McLaughlin’s championship lead is two points after he ran low on fuel and was passed by Shane van Gisbergen for victory with two corners remaining in Race 30 in Newcastle.

Van Gisbergen had lost the effective race lead due to a fuel miscue by Triple Eight during a chaotic Safety Car period and came into pit lane a second time under yellows.

Ironically, the reported extra six litres which van Gisbergen needed to make the 140-litre mandate proved to be the difference between the New Zealanders who would be champion.

The result means that whoever of the two finishes higher in tomorrow’s 95-lap finale will win the 2018 Virgin Australia Supercars Championship.

David Reynolds followed van Gisbergen through traffic to round out the podium in the #9 Erebus Penrite ZB Commodore.

Jamie Whincup finished fourth despite dragging his #1 Triple Eight ZB Commodore out of the wall in the middle stint of the race before he was one of several others who also pitted twice during the only Safety Car period of the race.

Van Gisbergen started on pole alongside Whincup, and McLaughlin in third alongside Fabian Coulthard, but it was those not in the championship fight who bettered their respective team-mates when the red lights went out.

Whincup was over a second clear of van Gisbergen during the opening lap but let him past on the run up Watt Street on Lap 2.

Whincup backed up McLaughlin as van Gisbergen drove away and the split between the two Triple Eight cars was over five seconds after just 11 laps, with Car #17 just behind Car #1.

The outgoing champion began to up his pace a couple of laps later before pitting at the end of Lap 17, leaving a nearly six-second gap between van Gisbergen and McLaughlin.

While McLaughlin began to chip away at van Gisbergen, Whincup was scything back through the field but ended up in the tyre wall at Turn 12 after contact with Coulthard, who had pitted on Lap 7.

Whincup dived at the #12 DJR Team Penske FGX Falcon and they hit side-to-side at Nobbys, with Coulthard firing back down the inside at the following right-hander.

The Kiwi got slightly sideways as they rubbed panels, feeding #1 into the tyre wall, and allowing Reynolds to pass both in the #9 Erebus Penrite ZB Commodore.

Whincup resumed at a net loss of three positions while stewards opted to not issue a penalty.

Meanwhile, McLaughlin had brought van Gisbergen’s lead down to around 5.3s when he took service on Lap 25.

The 2016 champion responded by filing into the lane next time around and resumed in ninth position, just ahead of Car #17.

McLaughlin gave him multiple nudges on #97’s out lap, and another next time around on Lap 28, but drifted to over a second in arrears after 39 laps completed.

The race turned on its head three laps later when Coulthard slid into the tyre wall at Turn 1.

With Car #12 sitting broadside, Percat had little chance of avoiding him and ripped the side of the #8 Timken ZB Commodore open on Coulthard’s Falcon.

Scott Pye (#2 Boost Mobile ZB Commodore) made lighter contact with Car #12 before Tim Blanchard (#21 CoolDrive ZB Commodore) drove into the side of it, necessitating recovery of two full cars and the driver’s doors of Car #8.

Almost all pitted and van Gisbergen was comfortably into the fast lane ahead of McLaughlin, but had to come back in.

Luckily for him, a number of others did the same and Car #97 fell only to net seventh in the running order, and effectively higher given the fuel concerns for some of those in front.

Craig Lowndes damaged his #888 Autobarn ZB Commodore when he rode up on Car #2, which had been parked partially in the fast lane.

It was therefore all but academic when Mark Winterbottom carried one of Lowndes’ awaiting wheels away while the imminent retiree was being attended to in his pit box.

Lee Holdsworth did not pit and the #18 Preston Hire ZB Commodore therefore led the field at the restart on Lap 48.

He bolted to a 3.2s lead at the control line with yellow flags bookending a series of greens being flown from the pit wall in a confusing resumption in play.

Holdsworth was shown no sympathy and took a drive-through penalty at the end of Lap 52, officially handing the lead back to McLaughlin.

Van Gisbergen, meanwhile, was fifth after surviving in the middle of a wild pack at restart.

He passed Simona de Silvestro for fourth at the top of Watt Street on Lap 57, with the #78 Harvey Norman Nissan Altima short on fuel and eventually needing a top-up in the final 20 laps.

Chaz Mostert was believed to be a similar case but it mattered not when he emulated Coulthard somewhat in sliding into the Turn 1 tyre wall and plucking the rear wing off the #55 Supercheap Auto FGX Falcon while running third.

When Pye relented from second position with 19 laps remaining, McLaughlin was 7.5s up on van Gisbergen but still faced a major fuel-saving task given that his crew had vented to make a total of 140 litres under the Safety Car.

The lead was still almost four seconds with three laps to run before engineer Ludo Lacroix gave McLaughlin the instruction “Fuel save, fuel save” midway through the penultimate lap.

Van Gisbergen was all but on McLaughlin’s tail at the top of Watt Street on Lap 95 of 95 before making the pass down at Nobbys Hairpin, by which time McLaughlin was clearly at the bottom of the pot.

“I don’t have much of a voice,” said the race winner.

“Few naughty words come out of my mouth just then; that was awesome. What a race, and that sets up tomorrow.

“I could see Scotty was really charging, that was awesome, two teams fighting really hard there.

“Obviously made a risky call to get all their fuel in, they did well there. Man, what a day, can’t wait for tomorrow.

“I thought it was all over, I seen about four Datsuns (Nissans) at the front and I thought ‘Argh, they’re the worst cars to pass’ and then I saw them doing burnouts trying to save fuel, so I knew they’d have to pit.

“Really enjoying the battle, look forward to tomorrow and good luck to them, but I hope we get it, we’ve got the right car. Can’t wait.”

McLaughlin put on a brave face despite the disappointment.

“It was close, I didn’t actually think we were that close,” he said of the fuel load.

“I thought we were pretty good there for a while and then it started getting a little more intense with the calling about the fuel and stuff.

“She’s on for tomorrow, it’s basically whoever finishes ahead of each other wins.

Regarding the fuel saving, he explained, “Just minimising blips and all other stuff.

“Our car was really strong, so I’m excited for tomorrow. If I qualifying a little better and pull my finger out, we’ll be alright.”

Her cause was aided by a 15-second time penalty for Cameron Waters (#100 Mosnter Energy FGX Falcon) for a lunge at Will Davison at the top of Watt Street which saw him clatter into the side of the #230 Milwaukee FGX Falcon.

Waters would have finished ninth, but was instead 14th.

Holdsworth was ultimately classified 12th, Davison a lap down in 16th, and Mostert five laps down in 21st.

Lowndes was the last finisher in 23rd, seven laps short of the winner.

Armor All Qualifying for the final race of 2018 will take place tomorrow from 1050 local time/AEDT.