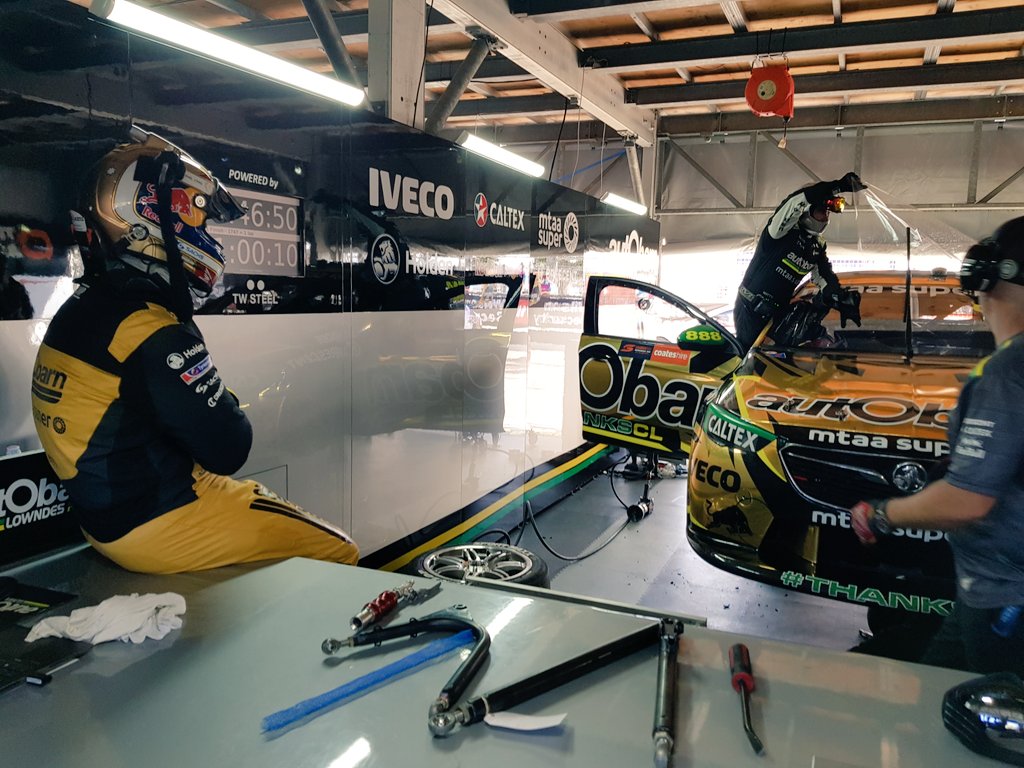 Craig Lowndes looks on as his team works to repair his car after a pit lane incident pic: Autobarn Lowndes Racing

Craig Lowndes was left annoyed after a mid-race pit lane incident took him out of contention during Race 30 at the Coates Hire Newcastle 500.

A Safety Car on Lap 42 triggered chaos in pit lane as nearly the entire field dived in for service.

It forced some teams to double stack, including Walkinshaw Andretti United’s Scott Pye.

Lowndes, who was tucked up behind Pye, had nowhere to go and made contact, climbing over the rear of the ZB Commodore.

The Triple Eight driver lost several laps in the garage before rejoining the race, having run seventh at the time of the incident.

“I’m more annoyed, to be honest,” Lowndes told Speedcafe.com after the race.

“We had a good car, good pace, to finish the way we did was disappointing.

“I think Scotty had a little bit more room to go forward,” he suggested. “I thought there was room to go by, but obviously there wasn’t.

“My front left looks like (it) tagged the back of his right rear and bent the steering arm.

“The problem was I couldn’t talk to the pit crew because at that point the car controller takes over.

“I was trying to wave my arms, do everything in the cockpit to tell them there was an issue with the car.”

Following the race Triple Eight Racing team manager Mark Dutton called for the pit lane to be made wider for next year’s event to make it safer for crews.

“It is a bit tight,”Dutton told Speedcafe.com.

“I don’t know if they can move the (pit) building back for next year, but they definitely should.”

“Not because we had an incident in pit lane and it hurt our race, but because when it’s that tight it isn’t as safe for the crews as we all want it to be.

“I believe it needs to be addressed for next year and you can see behind the pit buildings, there is more concrete that you could use.

“You don’t have to do a lot, half a metre makes the difference. For crew’s safety, that would be a good thing. Yeah it happened to us, it’s unfortunate (but) safety is the first thing.”

Pye, who ended up taking the chequered flag in fifth, also expressed concerns over safety in the lane.

“I was surprised he didn’t roll out earlier, because I was trying to work out where to go,” he explained.

“It’s hard with a narrow pit lane because you’ve got to be cautious of the guys with the wheels as well.

“With BJR (Brad Jones Racing), they try to be as close to their car as possible, but there’s not a lot of room to get in and if you tighten it up too much then I take my boys out.

“I stopped and I tried to keep the lane clear. He hit me pretty hard, everyone else managed to come through but I think Craig was maybe a little bit close when I got on the brake.”

Lowndes ended the race as the last classified finisher in 23rd, seven laps down.