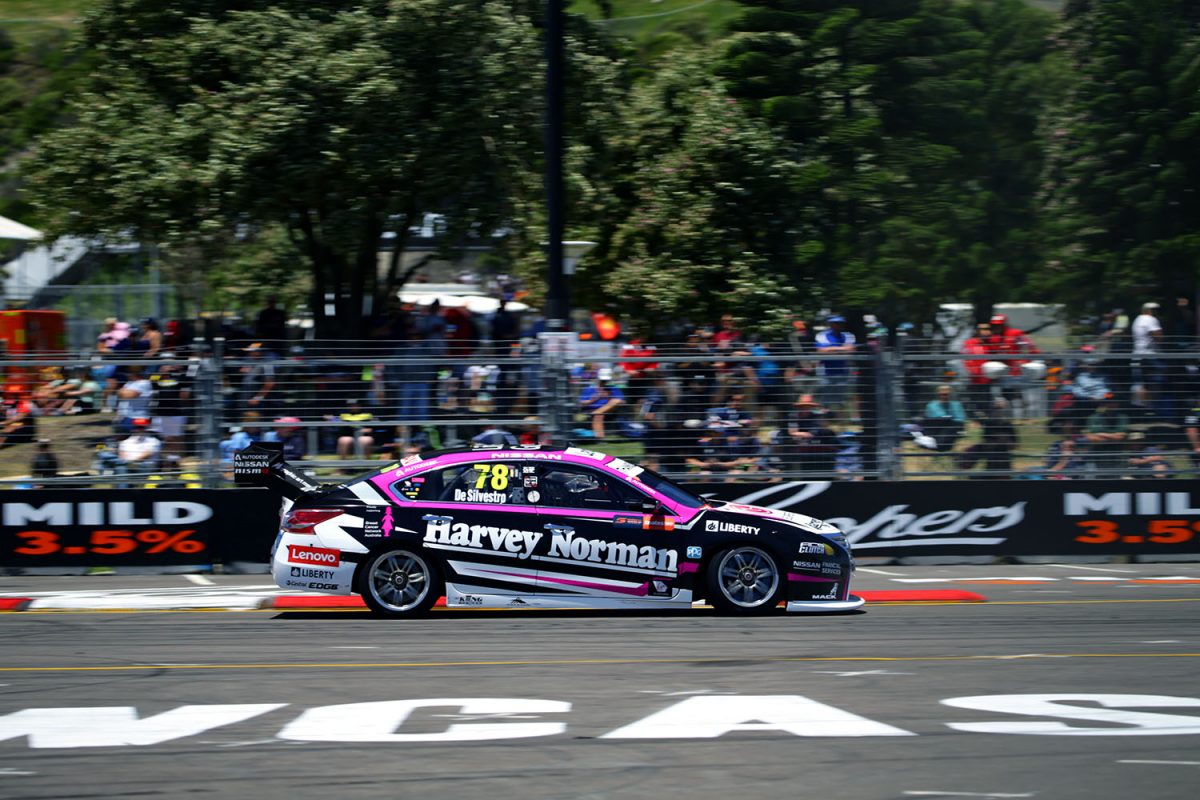 Simona de Silvestro has been left encouraged by a career-best Virgin Australia Supercars Championship race result of 10th in Race 30 at the Coates Hire Newcastle 500.

De Silvestro ran as high as fourth position for a brief period with around 40 laps remaining but needed a third pit stop to ensure that the #78 Harvey Norman Nissan Altima made it home on fuel.

She took that service with 18 laps remaining having been passed on-track only by eventual winner and podium finisher Shane van Gisbergen and David Reynolds, respectively, taking the chequered flag in 11th position.

Two of the other three Nissan Motorsport entries were classified immediately in front of de Silvestro, namely Andre Heimgartner in eighth and Rick Kelly in ninth.

That result would still have beaten her previous personal best in Supercars at Barbagallo this year by one spot, but Car #78 was promoted a position due to a time penalty for a Cameron Waters driving infringement.

De Silvestro’s next-best finish in any other race all season had been 14th, both at Sydney Motorsport Park and in the Supercheap Auto Bathurst 1000, while she twice finished 13th at Phillip Island last year.

In this year’s Newcastle opener, she gained track position during the only Safety Car period of the race to rise to sixth as more than half the field pitted multiple times in a bid to ensure they were fuelled to the end and/or made the 140-litre mandate.

She had been effectively 16th before the first pit stop cycle and 20th before Fabian Coulthard triggered the multi-car crunch at Turn 1.

De Silvestro was not completely satisfied with her own performance but felt that there was a solid foundation to build upon for tomorrow’s season-ending race.

“It’s really good,” she said of the result.

“I thought we were a bit screwed there with the fuel because I think we should have come in (again), but when they said we were like fighting for 12th, 11th, 10th, I was like ‘How did that happen?’

“(I) Made a few mistakes throughout the race, I locked up I think three times into the hairpin (Nobbys, Turn 11) so lost a bit of time there.

“A few tweaks for tomorrow and we know we’re pretty strong; we were able to pass a few cars, so looking forward to tomorrow.”

The Swiss driver had been poised to finish in the top 10 of the corresponding race of 2017, having run fifth before being roughed up by the chasing pack and understeering into the wall at Turn 12.

She ran 11th on merit on the Sunday after a succession of impressive moves at Turn 8 before being turned around by Scott McLaughlin at the top of Watt Street.

De Silvestro was not quite sure how to explain why she seems to find an extra turn of pace on the Newcastle East Street Circuit.

“It seems like the car here for me turns a lot which we always struggle throughout the year, never really finding the front end I need.

“Maybe (it is to do with) the style of track, it’s a lot of carrying speed, it’s a little bit more what I’m used to in open-wheel (racing) so it seems to suit me a bit.

“But I think the car here is good for me so we just need to find that for every other race track.”