Harris: Pressure all on Woods in SuperUtes title battle

Harris: Pressure all on Woods in SuperUtes title battle 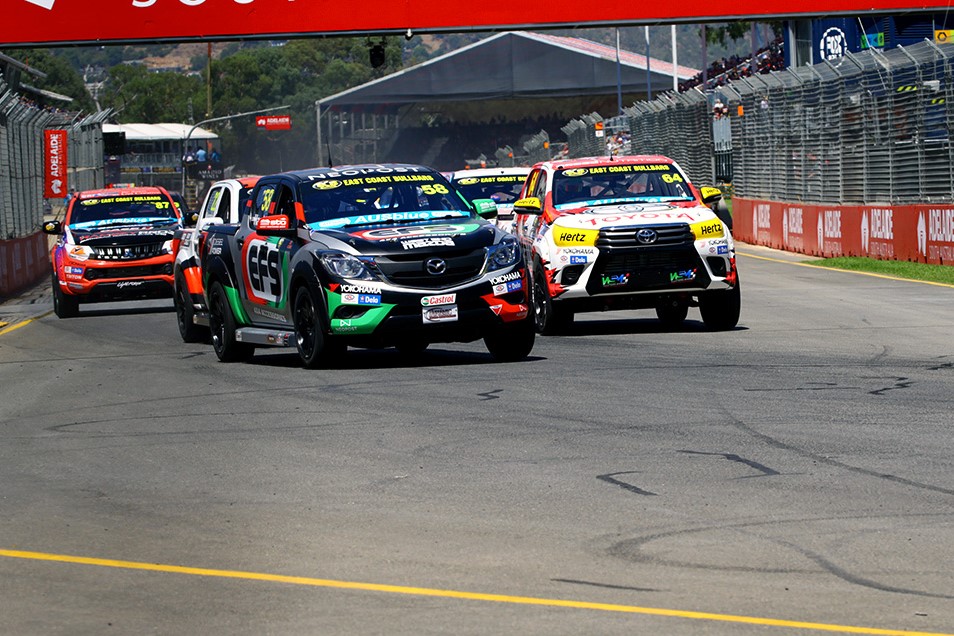 Three-time V8 Utes series winner Ryal Harris believes that Craig Woods is the man under pressure in this weekend’s SuperUtes decider having not ever won such a title.

Harris and Woods are the two realistic hopes of taking out the inaugural ECB SuperUtes Series this weekend and the former leads the latter by just 22 points after their respective current worst rounds are dropped, with 178 points on offer for a perfect round in Newcastle.

Harris, however, has 10 race wins to Wood’s two this year in a case of speed versus consistency.

The Peters Motorsport Mazda BT-50s of Harris and Aaron Cameron were the most highly developed cars at the start of the season, although Harris largely maintained his form line as the field continued to progress its hardware.

“I’ve won 10 races this year and he’s won two but he’s just been the most consistent and he hasn’t had any mechanical dramas,” Harris told Speedcafe.com.

“If I didn’t have any mechanical dramas I probably would have wrapped up the championship by now.

“The pressure’s all on him; he hasn’t won a championship before, we’ve won three.

“Obviously, it would be good to get one for the team after last year’s disappointment so we know what we need to do to win it.

“The only thing I’m concerned about is that he’s got five team-mates, half the field is his team-mate, so it’s not going to be easy but I’ll just treat it like any other race meeting.”

Harris arrived at Newcastle last year as the V8 Ute Racing Series leader but suffered a setback when he was penalised grid positions for a qualifying crash with fast debutant Matt Griffin.

His weekend unravelled completely in the final race of the year when a 10-second time penalty for contact with Cameron, ironically, meant that he ultimately missed out on the series by two points to Kim Jane.

Controversially, Matt Spratt was not penalised for a more blatant indiscretion later in Race 3 which would have seen him dropped back behind Harris in the running order, and swung the title back to the Queenslander.

Harris maintains that he was unfairly treated by but believes he has learned the lessons as to what he can manage.

“Last year was a farce, pretty much,” he declared.

“I went across the line in a position to win the championship and then after the 10-second penalty was added to my time, we obviously lost by one or two points. I don’t think I’ll ever forget that.

“I’m only racing one driver so I’m just going to go there and race Woodsy, that’s all I’m doing.

“Last year I sort of got caught up in trying to win the round and just carrying the extra weight, and Matt Griffin, the new Kiwi guy, was fast and I was trying to race him and not Kim Jane.

“I should have just let him go and cruised around in fifth every race and won it. Definitely live and learn.

“Last year I think I was very hard done by; Matt Spratt turned a guy around in the race and he never got a penalty which he should have.”

Round 8 at the Coates Hire Newcastle 500 has started today.