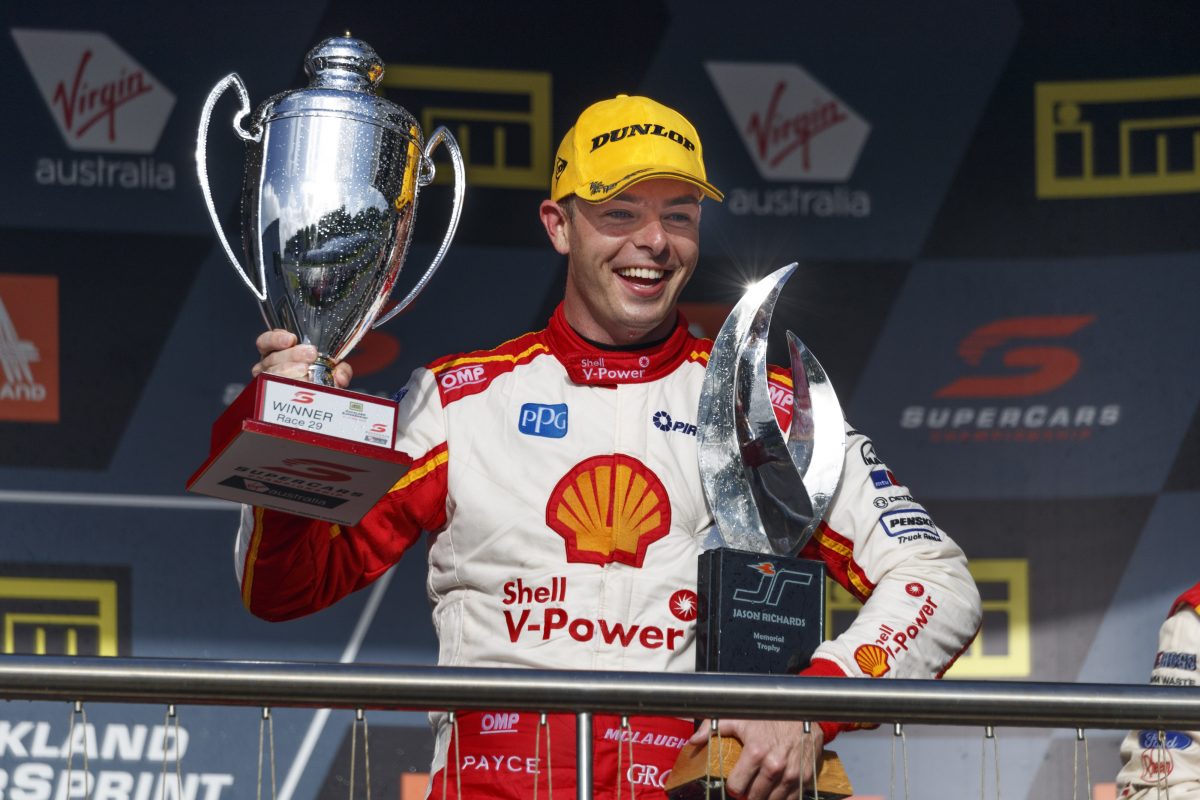 The championship leader joined his team at their Queensland workshop on Monday morning to watch Logano win the final race of the year at Homestead, Miami to secure his maiden Cup Series crown and Penske’s second.

McLaughlin described the experience as a motivation booster as he prepares to fight for his maiden Supercars championship at this weekend’s Coates Hire Newcastle 500.

The Kiwi, who holds a 14 point advantage over Shane van Gisbergen, says it is important to use everything at his disposal to aid his title cause.

This season Team Penske has also claimed the Indianapolis 500, Brickyard 400 (NASCAR), its 200th IndyCar win and then its 500th win across all series it has competed in.

“Yeah, absolutely (we can feed off that),” said McLaughlin, who drove a 2016 Penske NASCAR once raced by Joey Logano at last month’s Vodafone Gold Coast 600.

“You’ve got to try and use everything you can get.

“The way Joey and the team rose above in that last 15 lap shootout there was very impressive. We’ll just try and add to the Captain’s tally.

“I woke up early, started watching it at home then went into the shop and the simulator and stuff and the boys were there with the big screen on.

“It was really cool. The whole place got into it, big applause when Joey got across the line.

“We were talking about it – we know a lot of those guys now so you definitely do feel part of the team and definitely nothing like a little Monday motivation I think I said on my socials, so it’s quite cool.”

DJR Team Penske managing director Ryan Story admitted that witnessing the victorious scene from America has been infectious around the team leading up to Newcastle.

“It is infectious. We had all of our guys watching the big screen in the workshop watching every lap of that race at Homestead and willing him home,” Story told Speedcafe.com.

“It was the same thing with the Indianapolis 500, but to see Joey win that championship was very special.

“A lot of the guys feel like they are more familiar with that side of the business having run that 2016 car (at the Gold Coast) we have in our shop.”

McLaughlin has endured a busy week of media calls but is not getting ahead of himself to the point that he refuses the touch the championship trophy during photoshoots.

It boils down to a superstitious reason that follows in the footsteps of New Zealand rugby great Richie McCaw.

“I don’t touch any of the trophies that I haven’t won, (it’s) just a superstitious thing,” he added.

“Richie McCaw did it with the World Cup until he won it, he touched it after that. He went pretty well after that.”

Following on those lines McLaughlin has not been able to bring himself to rewatch last year’s heartbraking title deciding race that ultimately saw lose the title to Jamie Whincup.

“I think it’s just normal driver thing. I don’t need to watch it, I know what happened.

“It’s just one of those things. I just got on with it.

“I’ve looked at a lot of in car footage from the Sunday race because I had a lot of passes there, so definitely is something to learn from when we were strong, but the race itself, no I haven’t watched it on the TV coverage.”

Supercars are on-track tomorrow from 1140 local time/AEDT for Practice 1.