Chaz Mostert believes there is a lot of potential in TCR Australia after he headlined a group of Supercars drivers that sampled TCR machinery ahead of the series’ inaugural season next year.

The Tickford Racing driver attended TCR Australia’s official launch at Sydney Motorsport Park, where he jumped behind the wheel of Hyundai i30 N TCR machine that has only recently been imported into the country.

Mostert completed laps in a car prepared by HMO Customer Racing, which plans to field multiple entries in the two litre production touring car class in 2019. 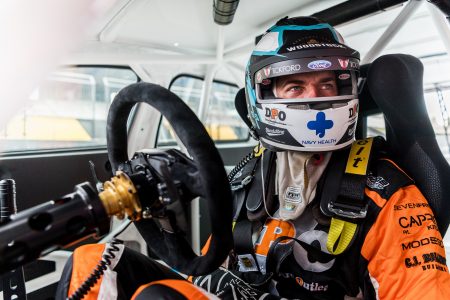 Chaz Mostert behind the wheel of the Hyundai

The team is run by Barry Morcom and David Cameron with the former having fielded Mostert in the Bathurst 6 Hour alongside close friend and Super2 driver Nathan Morcom, who also tested the car.

“I haven’t driven too many front wheel drive cars, but it felt pretty cool. They are kind of like a hot hatch, front wheel drive GT3 car. It handled really good, and I just love driving different cars,” said Mostert.

“As a front wheel drive car, it’s definitely on steroids. You can get quite a lot of speed up and the way it moves around is quite exciting. It also makes you feel pretty safe behind the wheel.

“They are actually quite comparable to a GT3 car in terms of driver satisfaction.

“Overall, I think TCR is pretty cool and it will be great to see a big field of these. Toe to toe racing, there’s a lot of potential in the series, but really, I’m just stoked to be asked by Barry to come out here and have a drive of the Hyundai.”

Mostert was joined by his Pirtek Enduro Cup co-driver James Moffat in praising performance of the TCR cars.

Moffat took to the track in a J.A.S Motorsport Honda Civic prepared by Wall Racing.

The Carrera Cup driver is open to the prospect of racing in the series but is keen to see how it develops during its first season which will run exclusively on the Shannons Nationals bill and will crucially avoid clashes with Supercars rounds.

“It’s a fun little race car to drive and that is what it is, it is a proper race car in terms of the package it delivers,” said Moffat.

“I can see it offering plenty of potential, it was good fun even though I only did a handful of laps.

“When you drive something new it is all about first impressions and it was pretty good.

“As a race car driving you are interested in just about anything. I would certainly be open to it.

“At the moment I’m working on some other things and with the series in its infancy if you like, I probably need to wait and see how it takes off.” 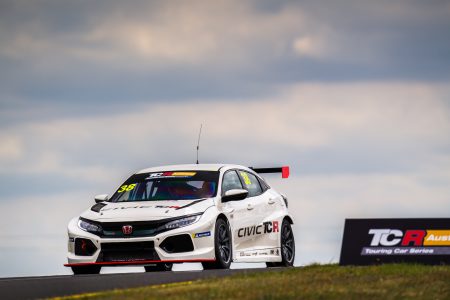 Brad Jones Racing co-driver Macauley Jones was among those to test the Audi RS3.

“It was very exciting to drive the Audi. My first impression was that I was surprised,” said Jones.

“They are a really nice car to drive. The power delivery was a lot different to Supercars, but the turn in the car was really cool. It was fun to drive.

“I’d love to race one with 15 or 20 cars around. I think the racing would be great and I hope that I can be involved,” said Tander.

Former Supercars full-timer Jason Bright was also among the a selection of interested onlookers keen to race the vehicles.

Other than the Pirtek Enduro Cup, Bright has done very little racing since announcing his full-time retirement from Supercars.

“They look like a lot of fun. I had a ball driving the Toyota 86 at The Bend. I’m keen to get in there if I can,” said Bright.

“It’s always hard to gauge it when you only see one on the track, but I think a full field of them should be able to put on some good racing.

“They’re a racey little car, pretty basic but good tyres and good aero. As a category, it’s ticking all of the right boxes around the world and I see no reason why it can’t work here.”

“When you look at the way they’ve gone about it as a category, capping the cost of the cars and the serviceability of the engines and all that, I feel like as a category that’s what you need.

TCR Australia will host its inaugural round at Sydney Motorsport Park from May 17-19 next year.

Organisers confirmed yesterday that the series will operate a three race sprint format with cars running on tyres from series supplier Michelin.