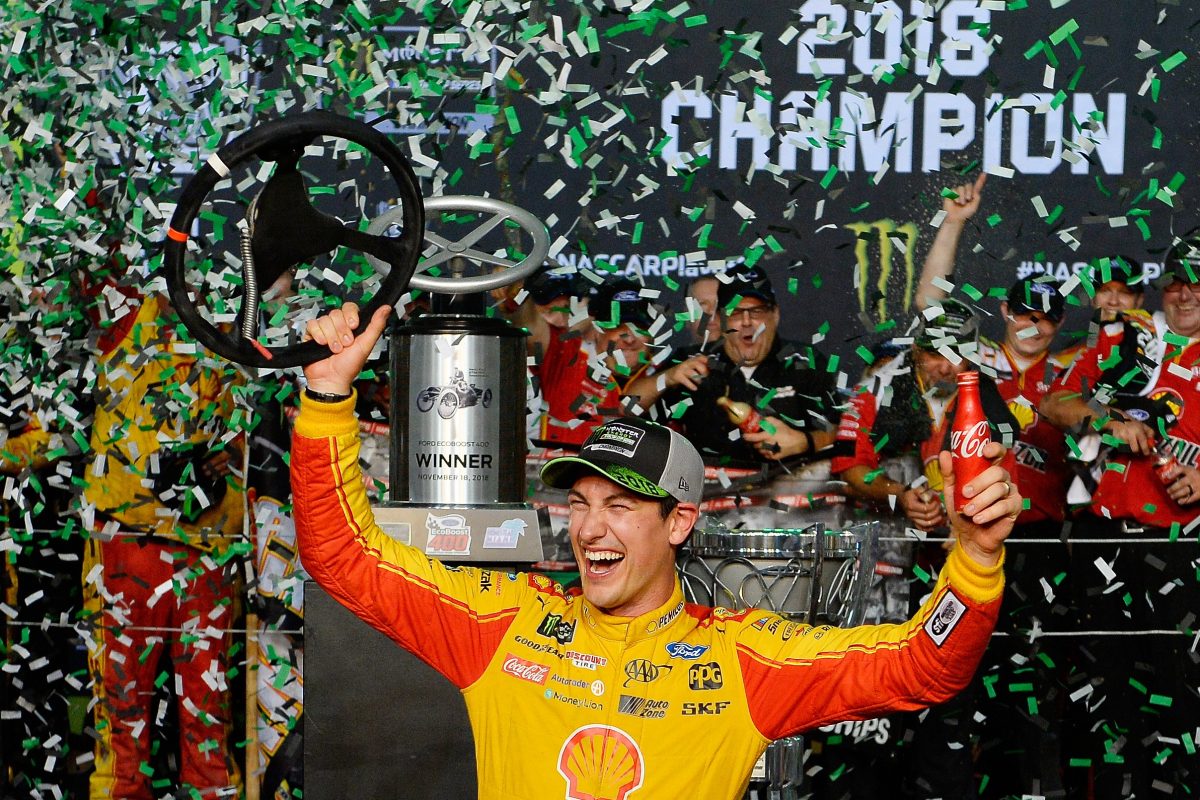 Joey Logano has won the NASCAR finale at Homestead-Miami and with it the Cup Series for 2018 in a head-to-head fight for the finish between the Championship 4.

Kyle Busch was in control of the field while Martin Truex Jnr sat alongside him with Joey Logano and Kevin Harvick behind when the race restarted for the final time after an unscheduled Caution with 15 laps remaining.

It was Truex Jnr who got the jump at the green flag and drove his #78 Furniture Row Racing Toyota into a position to defend his title, before Logano passed Kyle Busch for second on the same lap.

On Lap 255 of 267, he drove his #22 Team Penske Ford around the outside of Truex Jnr as they ran onto the back straight and led the rest of the way.

“We did it! We won the championship! I can’t believe it,” said Logano, who becomes the 33rd Cup Series champion in history.

“I don’t know what to say. This team, Roger Penske, (crew chief) Todd Gordon, the pit crew… oh my God.

“They gave me the car I needed at the end to do my job, put me in position to do my job; I couldn’t be more proud of them. We won the championship! Oh my God!”

The championship is Ford’s first in the Cup Series since 2004, and Penske’s first since Brad Keselowski in 2012.

Logano had finished third in Stage 2 but got out in front of the field for the restart with Harvick second, and similarly held top spot after Kyle Larson (#42 Chip Ganassi Racing Chevrolet) hit the wall and brought out a Caution not long before the Lap 200 mark.

On the second occasion, however, he had Truex Jnr with him and they even made side-to-side contact before the Toyota driver grabbed the lead on Lap 219, at which time Harvick was third and Kyle Busch fifth.

The Championship 4 began to file into pit lane under green flag first with Harvick in the #4 Stewart-Haas Racing Ford on Lap 231, then Truex Jnr and Logano next time around.

Despite having dropped nearly two seconds to Truex Jnr, Logano jumped the effective leader in the pits due to an error from the Furniture Row crew, before he was soon passed on-track by Harvick.

Kyle Busch got a break, however, when he waited long enough for what would be the final Caution of the season, caused when Keselowski turned Daniel Suarez around.

The incident between the #2 Team Penske Ford and the #19 Joe Gibbs Racing Toyota effectively gave Suarez’s team-mate Kyle Busch the lead in the #18 Toyota, but he held it only until the race restarted.

Logano went on to take his third race win of the season, from Truex Jnr, and Harvick, who won the first stage and was passed for the lead by Larson off the final corner of the second stage.

Pole-sitter Denny Hamlin (#11 Joe Gibbs Racing Toyota) was 12th in the end, one position ahead of Larson.

Replay: Contact between Logano and Truex Jnr early in the final stage