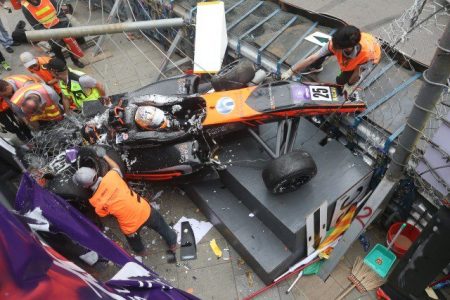 An horrific crash has marred the Macau Grand Prix when Sophia Flörsch launched backwards over the crash barriers.

Three laps into the Suncity Group Formula 3 Macau Grand Prix Flörsch made contact with Sho Tsuboi at the apex of Turn 3, the Lisboa right-hander at the end of the long, fast section that opens the lap.

It launched Flörsch into the catch fencing, bursting through it and coming to a rest in the marshal area outside of the circuit.

Following the incident the FIA issued a brief statement confirming Flörsch had been taken to hospital.

“A serious incident has occurred on lap 4 of the 2018 FIA F3 World Cup at Macau involving car #25 Sophia Flörsch (GER),” the statement read.

“Following evaluation by medical staff, the driver is conscious and has subsequently been taken to hospital for further evaluation.”

A further statement from the event organisers confirmed others were involved in the incident.

“Five individuals were involved in the accident at Lisboa Bend,” it read.

“All were conscious during transit to the hospital and are now receiving medical treatment: Two drivers; two photographers and one marshal.”

The red flag was immediately shown while repairs were made to the catch fencing, restarting with 11 laps remaining behind the Safety Car following the lengthy delay, Dan Ticktum claiming his second win in the prestigious event.

Flörsch was making her debut at the Macau Grand Prix, having competed in the FIA European F3 Championship throughout 2018.