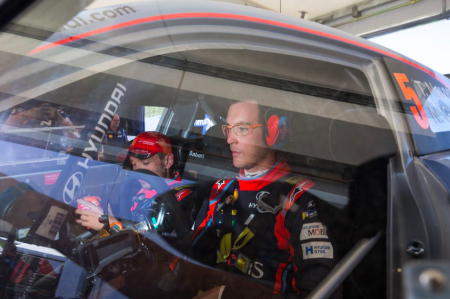 Thierry Neuville’s World Rally Championship title bid has come to a premature end after crashing out on the final loop stages at Kennards Hire Rally Australia.

The Hyundai driver was pushing to cling onto slim hopes of a maiden title before hitting trouble on a slippery Coramba stage.

Neuville suffered two impacts during the run, the first saw the Belgian clip a bank, costing him valuable time.

However, the fatal blow came moments later when the rear of his car stepped out and clipped a tree, damaging the rear suspension which forced the championship contender to stop on stage.

“We’ve been giving everything and took some risks to try to get the title,” read a post on Neuville’s Twitter.

“We had nothing to lose anymore. In SS22, the conditions were really bad. We went wide, clipped a tree, damage our car and had to retire.”

The Frenchman only needs to hold his sixth overall position through the final two stages to clinch his second title for M-Sport Ford in his final drive for the team.

“I haven’t seen him (Neuville) actually, but I hadn’t started the stage when I heard he was off. I was driving the stage like my granny would do!,” said Ogier.

Neuville had been on the back foot in Coffs Harbour after making mistake on the opening day when he ran into a hay bale. He then suffered a rear puncture that left him a mountain to climb to keep his title hopes alive.

Toyota’s Ott Tanak, currently second overall, still has a chance to claim the championship but would need to win the event and the claim the bonus five points for the Wedding Bells Power Stage, while hoping Ogier makes an error.

Jari-Matti Latvala leads the rally for Toyota but is expected to hand the lead back to Tanak to keep the Estonian in the championship hunt.