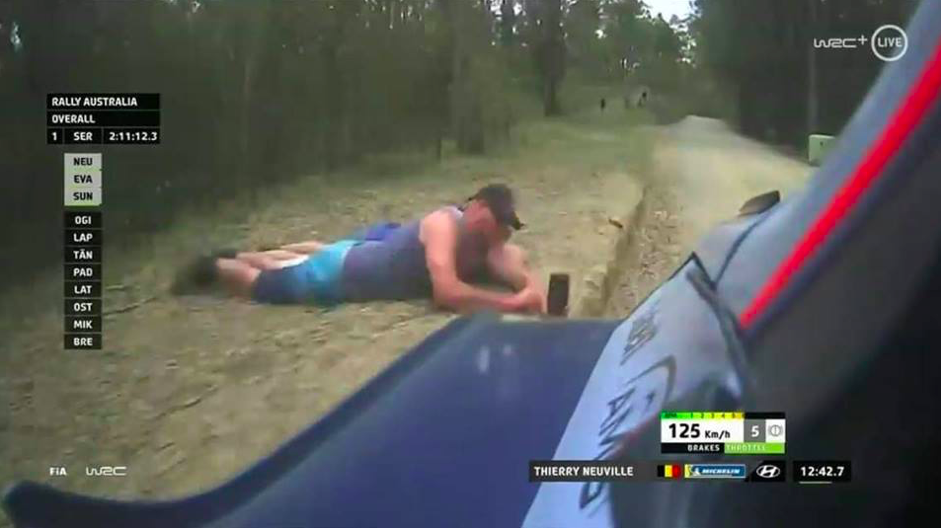 A pit of rogue spectators risking their lives on a stage at Rally Australia. pic: WRC+ Live

Two fans were captured by a television camera lying dangerously close to the edge of the road on a competitive stage while attempting to take a photo using a smart phone.

The individuals ventured into area not designated for spectators and came within touching distance of the i20 WRC clocked at 125km/h through the Welshs Creek stage during Day 2 of Rally Australia.

It is understood Police plan to interview the culprits tomorrow.

Rally Australia is not prepared to comment on the matter at this stage.

It is not the first time that irresponsible fans have been caught at rallies with a similar incident emerging at the event last year which prompted a Police investigation.

The incident follows a bizarre situation where a tractor gained unauthorised access on a live stage on Friday that triggered a crash for Hyundai’s Andreas Mikkelsen.

The antics of the fearless spectators has been widely condemned on social media.

This is so stupid and very dangerous 😡

Nuts behaviour!
The photo is not worth the risk, especially nowadays with remote photography.

give this idiot 25k fine