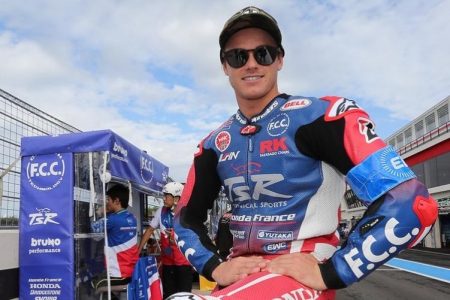 Australian Josh Hook will ride in the first season of the MotoE World Cup next year with Pramac Racing.

He and Italian Alex De Angelis have been named to compete for the team, with whom Jack Miller races on a Ducati in MotoGP, in the electric series.

Hook has a small number of Moto2, 125cc grand prix, and Superbike World Championship starts to his name.

In the long-distance arena, however, he has made a name for himself as part of the F.C.C Honda TSR crew which won the 2017/18 FIM Endurance World Championship.

That triumph came during a season in which they also claimed victory in the 24 Heures Motos at Le Mans in April.

“I’m thrilled to be with Alma Pramac Racing on this new MotoE adventure,” said the Taree-born 25-year-old.

“The 2019 season will be the first of many years for this new category and represents a great opportunity for me.

“I am very grateful to the team for believing in my ability and I am sure that we can get great satisfaction.

“MotoE is something new for everyone, so it will be great to work on the development of the bike and I’m sure we can have some great races.”

The 34-year-old De Angelis has one MotoGP podium, a second at Indianapolis in 2009, and four lower class grand prix wins to his name.

He and Hook are the latest in a string of MotoE rider announcements, arguably headlined by the return of two-time MotoGP championship runner-up Sete Gibernau to racing after nearly a decade in retirement.

Testing for the new category will start at Jerez later this month while the first of five races in 2019 takes place at the same circuit in early May.